This blog was originally posted on Global Forest Watch.

For decades, forest and land fires in Indonesia have been an annual environmental crisis, but the dry conditions caused by the 2015 El Niño made that year’s fire season the worst in 20 years: approximately 2.6 million hectares (6.4 million acres) of land were burned between June and October, Indonesia’s dry season. The fires, many burning on carbon-rich peatlands, exposed millions of people across Southeast Asia to toxic haze and tripled Indonesia’s annual greenhouse gas emissions. This year we have not seen nearly as many fires because of wetter conditions, but the root of the problem still needs to be addressed.

Nearly all fires in Indonesia are human-caused. The country’s forests and peatlands—carbon-rich, water-logged landscapes that have become another popular option for agricultural expansion—are too moist for fires to ignite naturally. Therefore, they are typically actively drained and set aflame to prepare for agriculture or drive people away in land conflicts.

An analysis of new fire history data on Global Forest Watch Fires confirms that fires tend to be concentrated on agricultural concessions and peatlands in Indonesia. Seeing where fires occurred in the past can help inform fire prevention efforts, like companies’ no-burn commitments, government land use and restoration strategies, or village-level fire prevention programs to the areas of greatest need.

Click on different provinces on the interactive map to see the number of fire alerts and where they occurred. You can also hover over the bar chart to see the fire alerts breakdown by year. 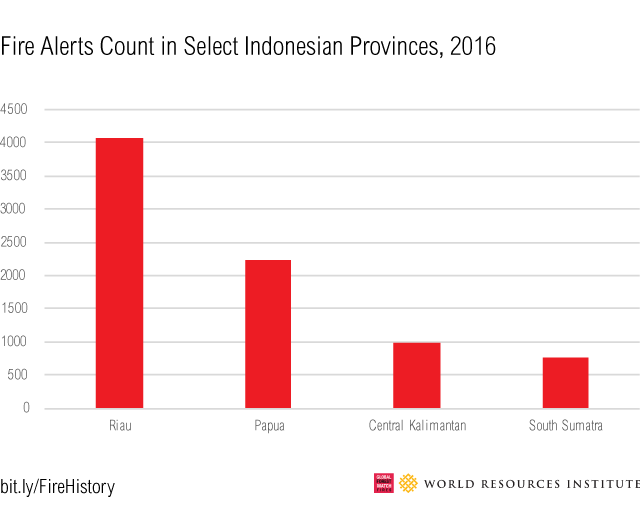 Despite 2016 being a wet year, the Riau province experienced four times as many fires at the historically fire prone provinces of Central Kalimantan and South Sumatra.

Agriculture has been the single biggest driver of these fires. More than 60 percent of the 2015 fires in Central Kalimantan and South Sumatra occurred on peatlands. In South Sumatra, 50 percent of its fires in 2015 were also on pulpwood and wood fiber concessions. 2016 fire alerts data shows that this pattern persisted in Riau, where 47 percent of the fires that year were within wood fiber concessions. Looking back further, Central Kalimantan has had more fires alerts on oil palm concessions than any other type of land in every year since 2001.

The data also show that historical fire patterns may be changing. The Papua province, for example, has seen an uptick in fires in recent years. In 2015, fires alerts spiked to 14,500, compared to an average of roughly 3,200 fire alerts each year between 2001-2015. With more than 35 percent of fires detected since 2001 occurring inside protected areas and illegal burning on the rise, its relatively untouched forests are becoming increasingly threatened.

These fire history data offer clues as to where and what kinds of fire prevention efforts may be most effective in helping Indonesia avoid disastrous fire seasons in the future, including:

Looking into the past can help Indonesia avoid repeating its history of devastating annual fire seasons. Together with increasingly accurate, near real-time data coming online, the fire history data may help break the cycle.