Welcome to the third installment of WRI’s six-part blog series on the future of tonewoods, the woods used in guitars and other musical instruments. In each installment, we look at a different species of tree used for a certain part of the guitar. Each wood presents its own challenges and possibilities surrounding sustainable harvest.

Guitars appeal to our eyes as much as our ears. The most highly desired tonewoods are not only resonant and produce a good sound, but are also visually beautiful.

One of the most stunning visual traits in wood is a rare phenomenon called “figure.” Figured wood can take many forms, but it generally lends a rippling or wavy appearance to otherwise plain wood grain. While many guitar-makers primarily use exotic tropical tonewoods, some of the most dramatic figure is found in a North American wood that can also be sustainably produced—maple. 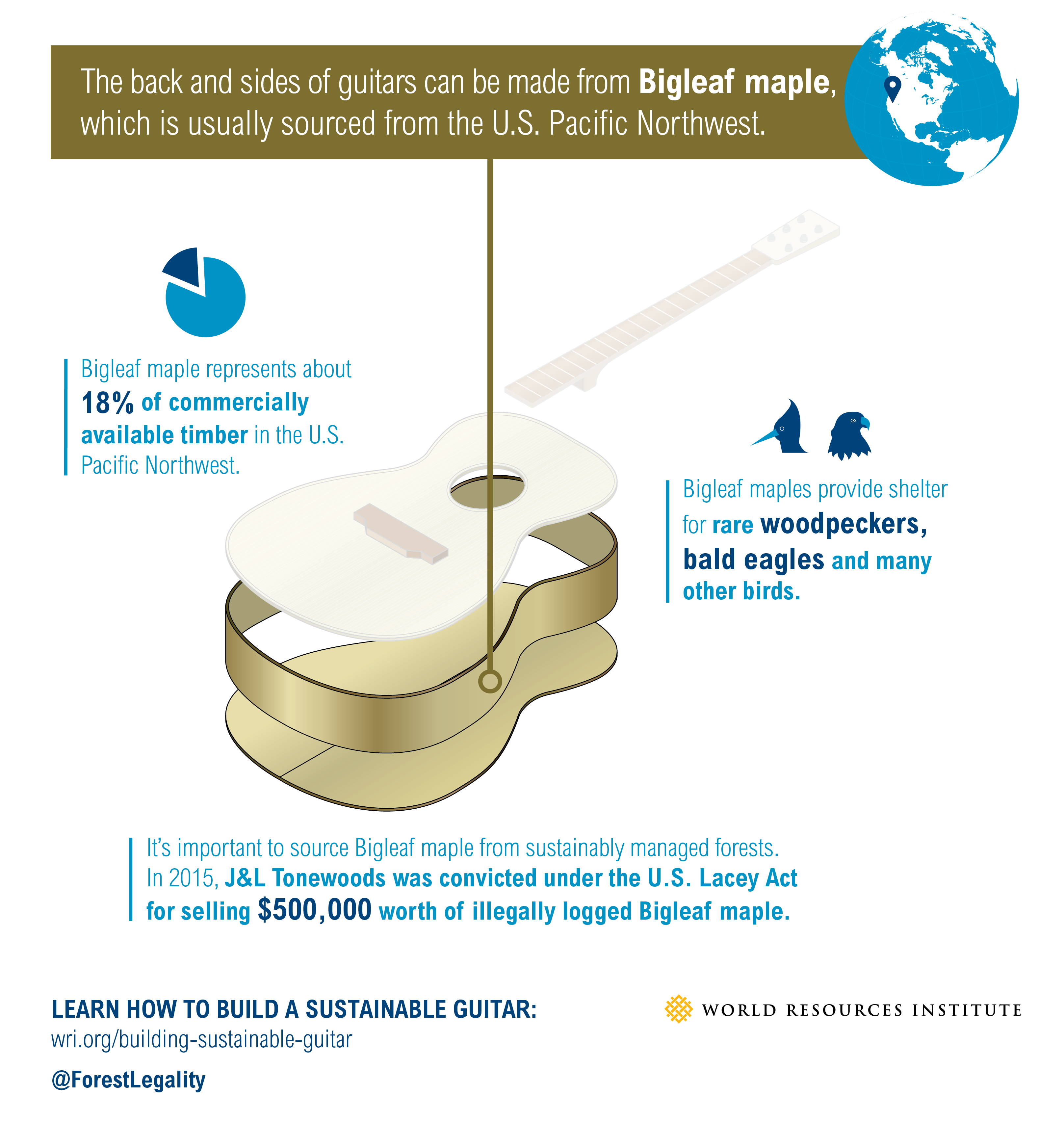 The History of Maple and Musical Instruments

Maple has a long history in string instruments. On acoustic guitars, it is primarily used in the back and sides, but can occasionally appear on the top. On electric guitars, it is commonly used for the neck and top.

Old world violins and bowed instruments are nearly exclusively made from European maple, but the wood has a distinct American history as well. Maple sugar and sap were a dietary staple for native tribes in the winter, and Thomas Jefferson and abolitionist groups jointly promoted maple sugar production as a domestic and ethical alternative to slave-grown cane sugar. Icons ranging from Eddie Van Halen to Jimi Hendrix have played electric guitars made from maple, but it’s largely fallen out of fashion in acoustic guitars.

Today though, maple is experiencing a renaissance among sustainability-minded industry leaders.

Bigleaf maple (Acer macrophyllum) in particular is gaining traction in the modern guitar community, and is positioned to be one of the most important tonewoods in the next century. It grows quickly in the wet forests of the U.S. Pacific Northwest, and produces some of the best figured wood. It’s also plentiful and cheap in comparison to exotic tropical tonewoods, which are often overharvested, illegally logged or from poorly managed forests. 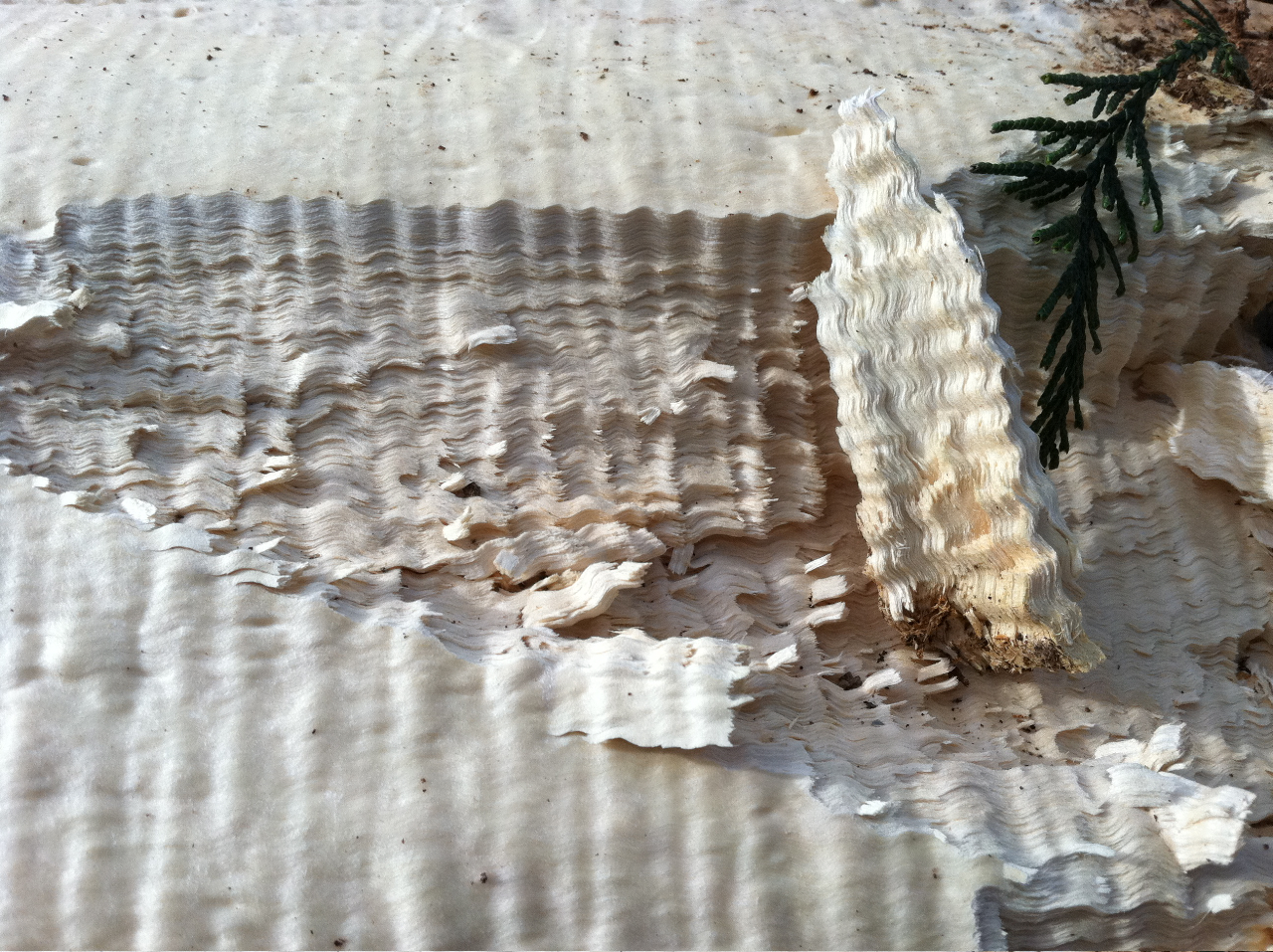 Maple’s advantages are attracting attention from some of the world’s leading guitar manufacturers and tonewood suppliers.

For years, foresters believed that figured wood was a rare anomaly in forests. Now, Pacific Rim Tonewoods is finding that the figure so desired for guitars may actually be genetic. The company is currently finishing a two-year research project with Simon Fraser University on growing figured maple. This research parallels their koa project in Hawaii, and establishes a scientific protocol for Bigleaf maple propagation.

Pacific Rim Tonewoods will plant 50 acres of Bigleaf maple over the next seven to 10 years. Steve McMinn, the company’s founder, believes that this could lead to tonewood forest plantations, which would establish a market in the region while also being environmentally friendly.

Taylor Guitars is leading the charge for maple on the part of manufacturers, and recently launched a new line of maple guitars meant to appeal to players that favor tropical woods. In the process, they are adapting traditional design principles to highlight maple’s desirable characteristics. For example, they have redesigned the bracing pattern on the guitar back to create a unique, warm tone usually lacking in maple guitars. 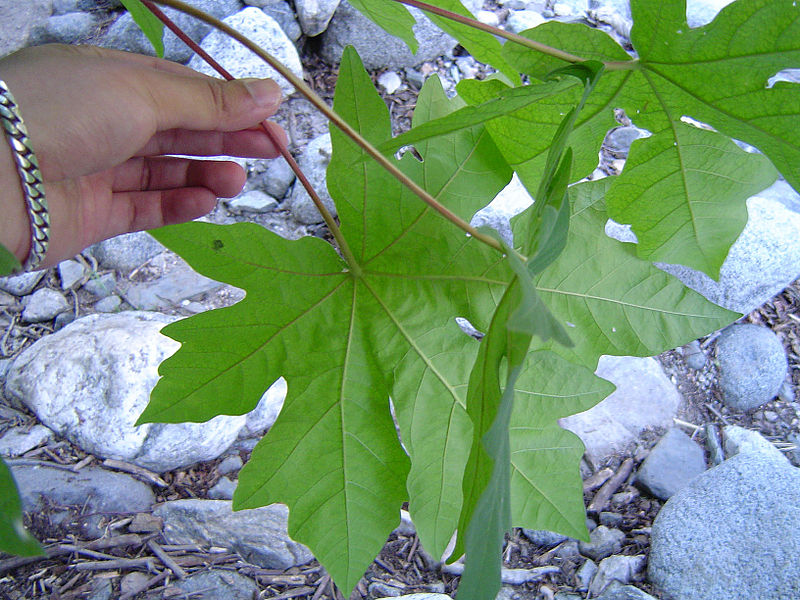 Leaves from a Bigleaf maple. Photo by Geographer at English Wikipedia.

A Need for Proper Management

Unfortunately, Bigleaf maple is not immune to mismanagement and abuse. Despite its relative abundance, it was at the heart of a 2015 Lacey Act case in which Washington-based J&L Tonewoods admitted to selling figured Bigleaf maple that was illegally harvested from the Gifford Pinchot National Forest. The wood has also gained a reputation in the Pacific Northwest as “meth maple,” since drug addicts will cut trees from protected forests and sell them on the black market for a quick source of cash. Even in developed countries like the United States, effective law enforcement and responsible, ethical consumption are crucial to advancing good forestry practices.

Shakespeare’s famous line, “That which we call a rose by any other name would smell as sweet” may describe the next tonewood in the series. Stay tuned for a trip around the world in search of the most infamous and controversial trees in the world.