This is the third installment of our Restoration Global Tour blog series. The series examines restoration success stories in Asia, Latin America, Africa, Europe and North America. Tune in over the coming months for additional installments, or check out our Restoration Diagnostic for more information.

Latin America and the Caribbean are home to some of the most biodiverse and productive ecosystems in the world. The region holds about half of the world’s tropical forests, and more than 30 percent of its mammals, reptiles, birds and amphibians. But despite the region’s ecological importance, more than 200 million hectares (494.2 million acres) of land has been completely deforested or degraded in the past century, an area the size of Mexico.

All hope is not lost. Case studies from WRI’s Restoration Diagnostic show that land restoration in Latin America and the Caribbean has been done before. Successes from Brazil, Panama and Costa Rica offer lessons on how to get degraded land back into productive use.

Located inside the city of Rio de Janeiro, Tijuca National Park is one of the largest urban forests in the world – but that was not always the case.

In the mid-19th century, agricultural expansion—especially coffee plantations—degraded and deforested the area that now encompasses the park. Yet leaders also recognized an opportunity to use this land to bring ecosystem services like watershed protection to a growing city, and in the 1860s, Brazil established Tijuca Forest as the country’s first conservation area. Over the next 25 years, the country planted nearly 90,000 trees. 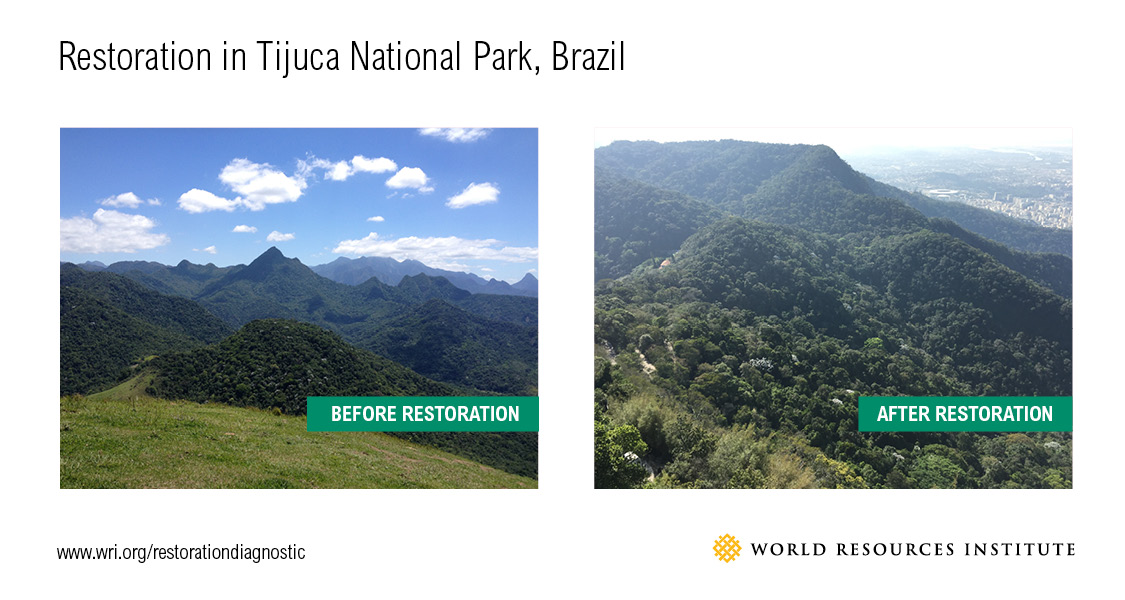 However, making Tijuca a protected area was not enough to completely restore economic and ecological benefits to the region. Severe water crises (similar to the ones now afflicting Brazil) led the Brazilian government to designate the area as a national park in 1961. This allowed for the scaling up of restoration efforts, as the government realized vegetation’s benefits of modulating water flows, slowing runoff in the rainy season and capturing water during the dry season. Over time, the park has improved Rio’s water supply and air quality, added recreational opportunities and provided habitat for animals.

Nearly 50 percent of the Panama Canal Watershed is covered by forests, and it’s one of the most biodiverse areas in the world, despite 200 years of degradation and deforestation.

Forests were first cleared in the late 1800s to make way for railroads and other infrastructure needed to build the Panama Canal. Deforestation continued between 1904 and 1914 as the U.S. government built and opened the canal, one of the world’s largest trade routes, and further accelerated in 1979 when Panama received control of the canal from the United States. 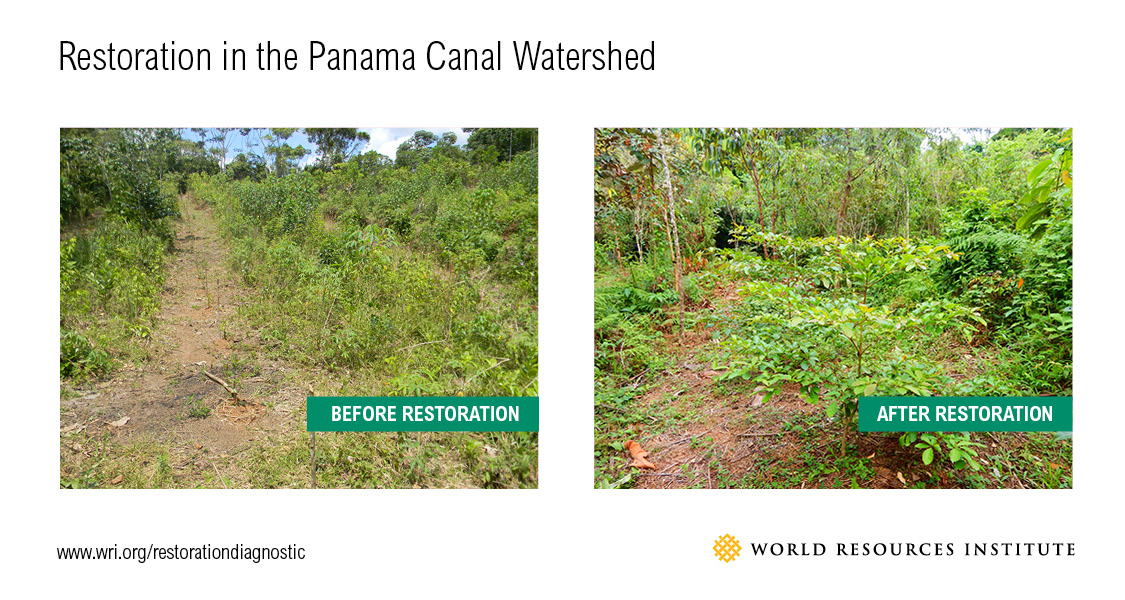 However, diverse actors such as administrators, scientists, politicians and conservationists eventually recognized that preserving reliable water flows through natural or “green infrastructure” was essential to preserving the functioning of the canal itself. In the 1980s, the government began enforcing legislation that prohibited deforestation and mandated forest restoration in the region. In 2011, the Panama Canal Authority formally initiated a reforestation program meant to protect dry season water flows required for day-to-day operation of the canal and secure drinking water for 1.3 million people (about two-thirds of the national population). Today, the watershed serves as a source of freshwater for electricity generation and for the operation of the canal’s navigational locks.

Costa Rica’s forests are starting to rebound after taking a huge hit decades ago.

Crop production, cattle grazing and rapid expansion of its road network reduced forest cover in Costa Rica from 77 to 41 percent between 1943 and 1986. This deforestation also spurred soil erosion, which threatened to clog the hydropower reservoirs that provide about 75 percent of the nation’s electricity.

The situation is now improving thanks to a restructuring of financial incentives.

To start, the government provided tax deductions in the 1970s for landowners who restored degraded landscapes, replaced in the 1990s by a Payment for Ecosystem Services (PES) scheme that gave landowners money for protecting forests or planting trees.

But things didn’t truly start to change until the country stopped subsidizing activities causing deforestation in the first place. In the mid 1980s, the World Bank reduced cattle ranching subsidies in the country, fundamentally taking pressure off lands and forests. As a result of this structural adjustment program, the nation’s cattle herd declined by a third, demand for grazing pasture declined, and the land was allowed to regenerate. As of 2005, forest area had increased to 2.45 million hectares (6 million acres), or 48 percent of the country. 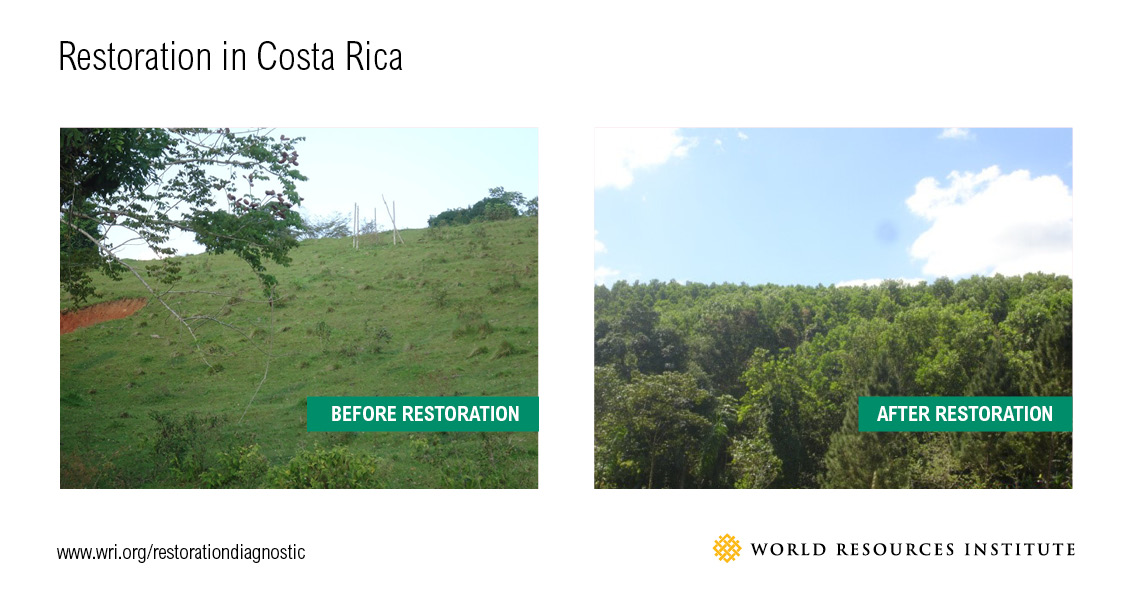 Scaling Up the Successes

The future of restoration in Latin America and the Caribbean is promising. A regional project called Initiative 20x20 has already secured commitments to restore 27.7 million hectares (68.5 million acres) of land by 2020—an area the size of the United Kingdom —with private impact investors earmarking $1.15 billion to support restoration projects.

As the reasons to restore become increasing apparent through stories from Brazil, Panama, Costa Rica and other successes, look to this region as a frontier for the emerging global restoration movement.