Renewable energy is growing worldwide, with a six-fold increase in non-hydro renewables over the last decade from 85 to 657 gigawatts (GW).

The shift toward cleaner energy is here. The question is, are we prepared for it? 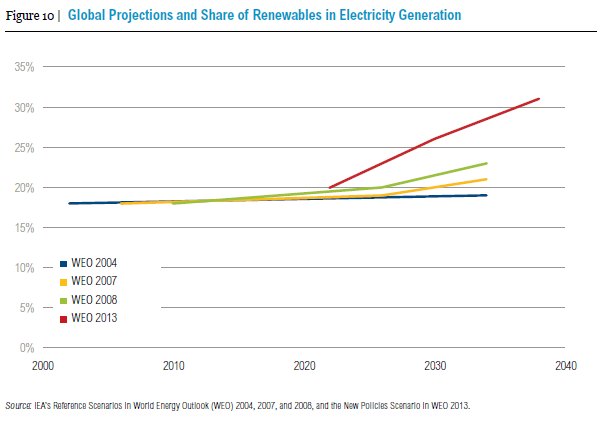 (Note for figure: By 2012, the level of renewable capacity was already as high as the maximum potential level in 2030 that had been projected by the IEA a few years earlier.) 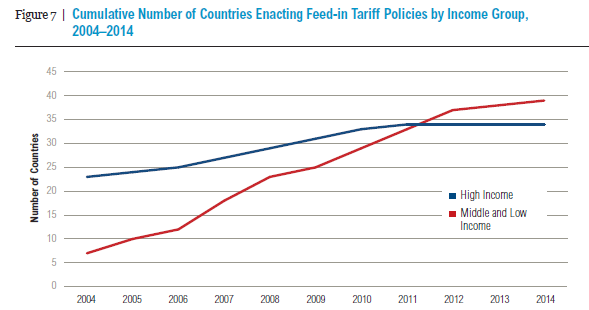 (Note for Figure: Rise in countries by income group that have enacted Feed-in Tariff (FIT) policies since 2004.)

How These Trends Affect Decision-Making

These trends play a role in decision-making about the future of electric power, especially in countries like Brazil, China, and India, according to a new report from WRI, Prayas (Energy Group) (PEG), Regulatory Assistance Project (RAP), International Energy Initiative (IEI), and UNISON Group, The Future Electricity Grid: Key Questions and Considerations for Developing Countries. Here are three challenges that bear watching as renewable energy expands:

How governments, energy planners, regulators and utilities respond to these trends and monitor these challenges will determine how well they build a future grid to deliver the clean, reliable and affordable power people need to thrive. The time to take action is now.