Urbanization presents major challenges: congestion, sprawl, inefficiency, health hazards and high cost of living, just to name a few. But the choices we make for our cities can transform these challenges into opportunities: mobility, connectivity, economies of scale, healthier lifestyles and economic opportunity.

Experts spend a lot of time identifying solutions to seed these transformations, but too often they forget about cities’ most iconic landmarks—buildings. Improving the energy efficiency of buildings is an often overlooked strategy that can help alleviate many of the challenges cities face—from climate change to public health problems to unemployment and poverty.

New WRI research examines the vital role building efficiency can play in shaping sustainable cities of the future, as well as ways policymakers can accelerate it in their own communities. Here’s a look at four of the economic, social and environmental opportunities building efficiency creates:

The construction sector represents 10 percent of world GDP, 10 percent of the workforce, and, in emerging markets, will likely make up 16.7 percent of GDP by 2025. This is a lot of money spent on buildings. These are good, long-term investments, especially because buildings last 40 years or more and construction creates more jobs than other sectoral investments. 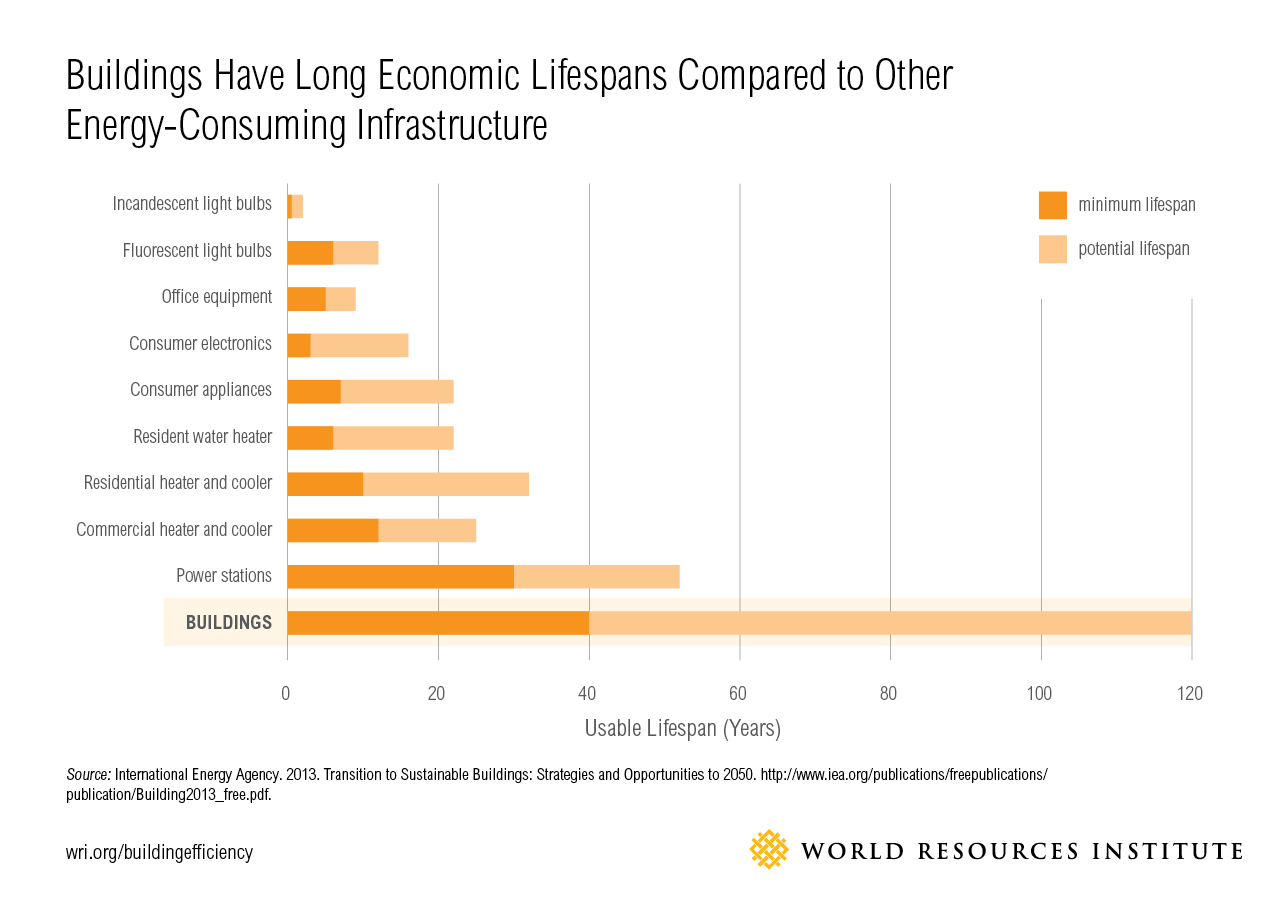 Investments in the building sector are less risky and create better returns when directed toward energy-efficient buildings. Globally, buildings and construction are responsible for 60 percent of electricity use, 12 percent of water use, 40 percent of waste, and 40 percent of material resource use. In cities, buildings occupy 50 percent or more of the land area. Each of these is a cost, but each efficiency improvement in energy and resource use removes a cost that the city and its residents no longer have to pay.  For example, each additional $1 invested on energy efficiency avoids more than $2 on energy supply spending. Efficiency savings free up money for other investments, stretching scarce resources.

Improvements in efficiency are particularly important for the lowest income urban residents, who pay a larger portion of their income on energy and are least able to afford higher energy prices or cope with unexpected fluctuations in energy costs.

With cities expected to add 3 billion people between 2008 and 2050, almost doubling the global urban population, the world is poised for a building explosion. In fact, an area equal to roughly 60 percent of the world’s current total building stock will be built or rebuilt in urban areas by 2030, mostly in developing or emerging countries such as China, India and Indonesia. Without changes in construction practice, related emissions are also expected to skyrocket. 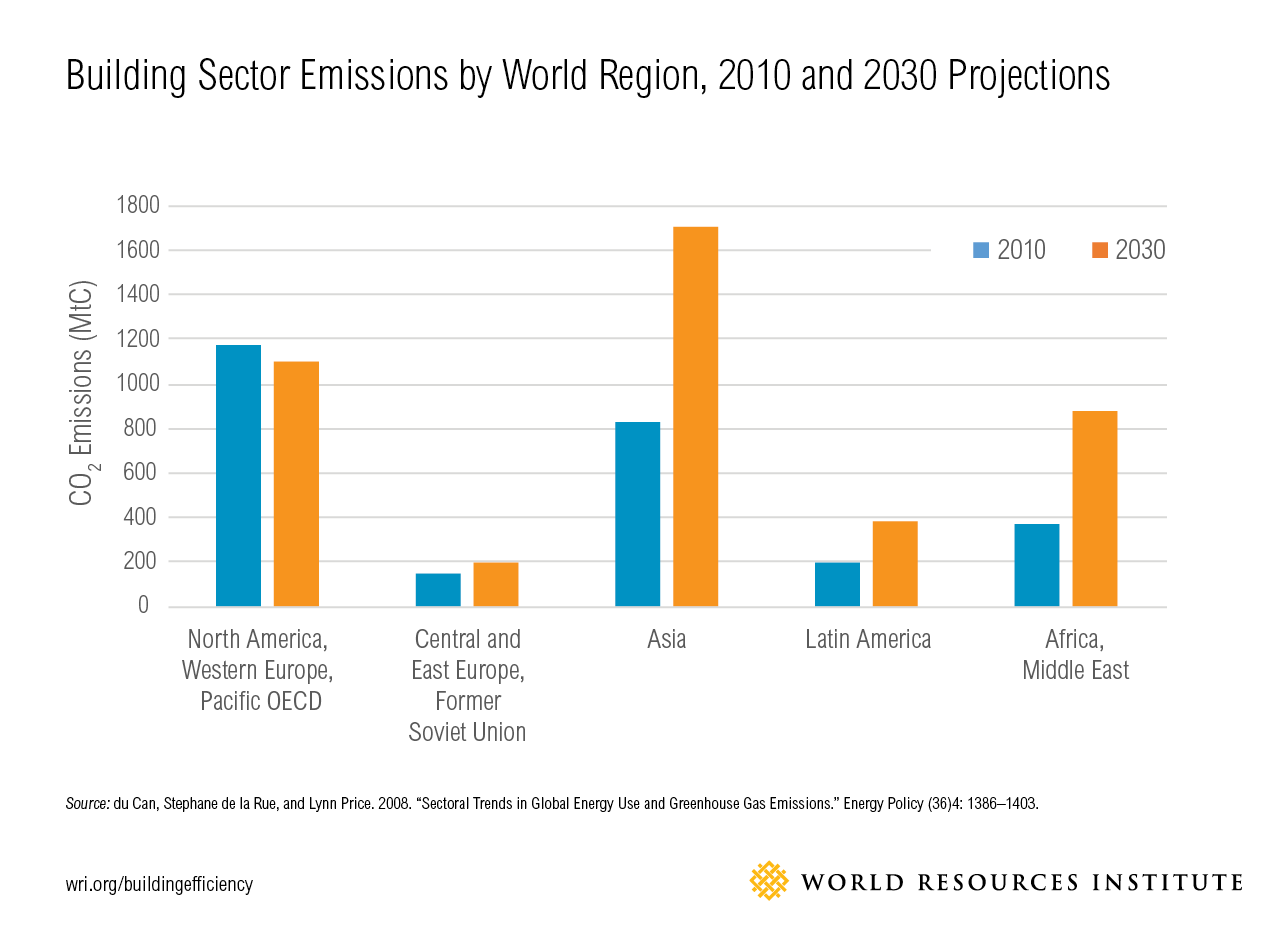 But how cities choose to build makes a big difference. There is tremendous potential to implement best-in-class building practices in new construction in rapidly growing countries. These countries could in reap the economic and climate benefits of energy-efficient buildings and avoid “locking in” decades of inefficiency and the need for more costly renovations later.

3. Building efficiency is one of the most affordable ways to curb climate change.

In addition to reducing infrastructure costs and household expenses, building efficiency also provides the most bang for the buck in reducing climate change-causing emissions. Efficiency improvements in buildings often have low or no marginal cost, or provide a return on investment in the form of energy cost savings in as quickly as six months to a year. This is a significant difference from emissions-saving investments in other sectors such as agriculture or transport, which are relatively expensive or result in lower emissions reductions. 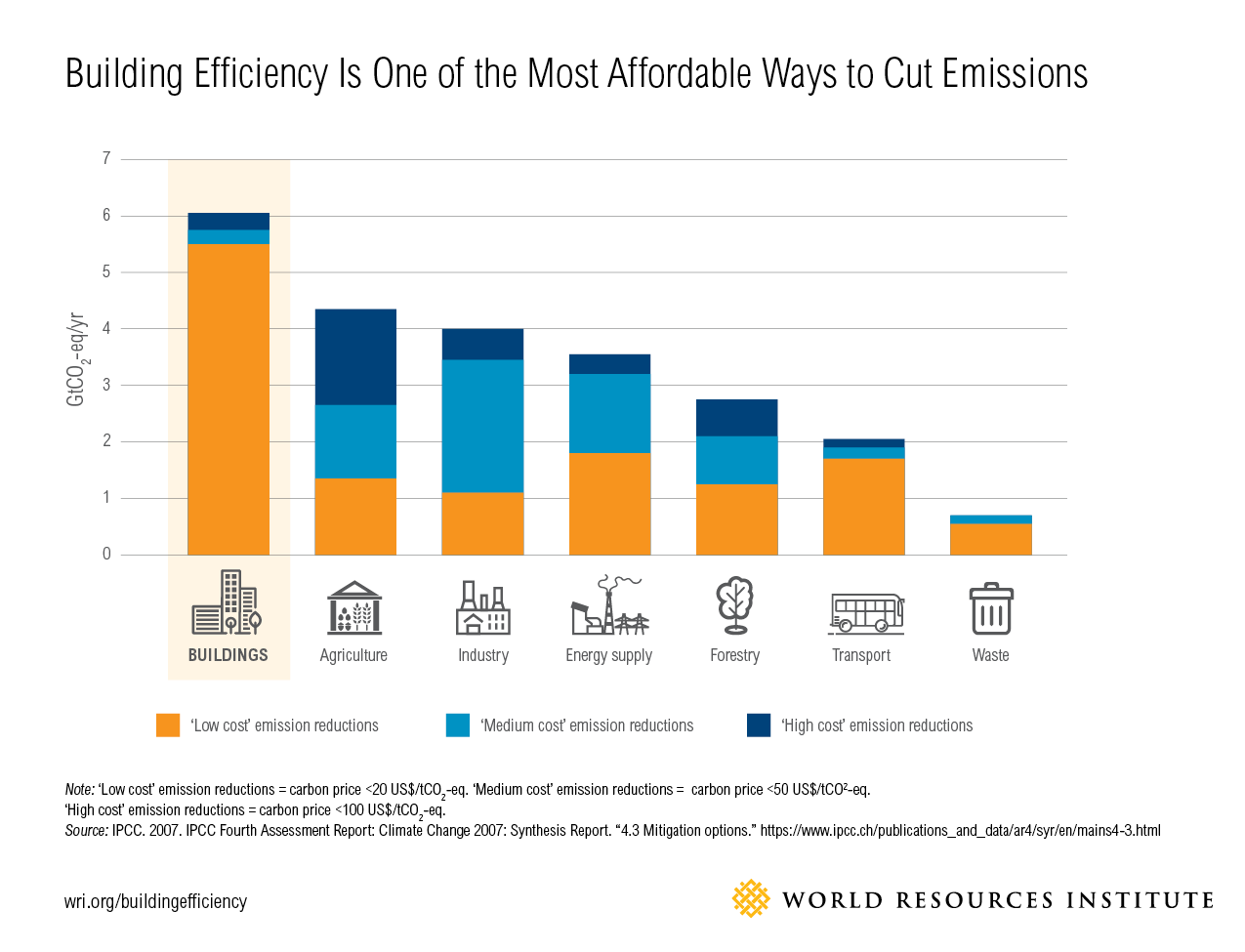 4. Building efficiency can significantly reduce illness and death related to air pollution, particularly in the places suffering the most.

Every year, approximately 3.3 million deaths are caused by energy-related outdoor air pollution—such as smog from coal-fired power plants—and 3.5 million deaths are due to indoor smoke. The highest rates of exposure are in developing cities, where people are dependent on indoor fuel combustion for heating and cooking. In China and India, the regions with the highest air pollution-related mortality rates, the largest contributors to these deaths are residential and commerical energy use—buildings are at the heart of the problem. 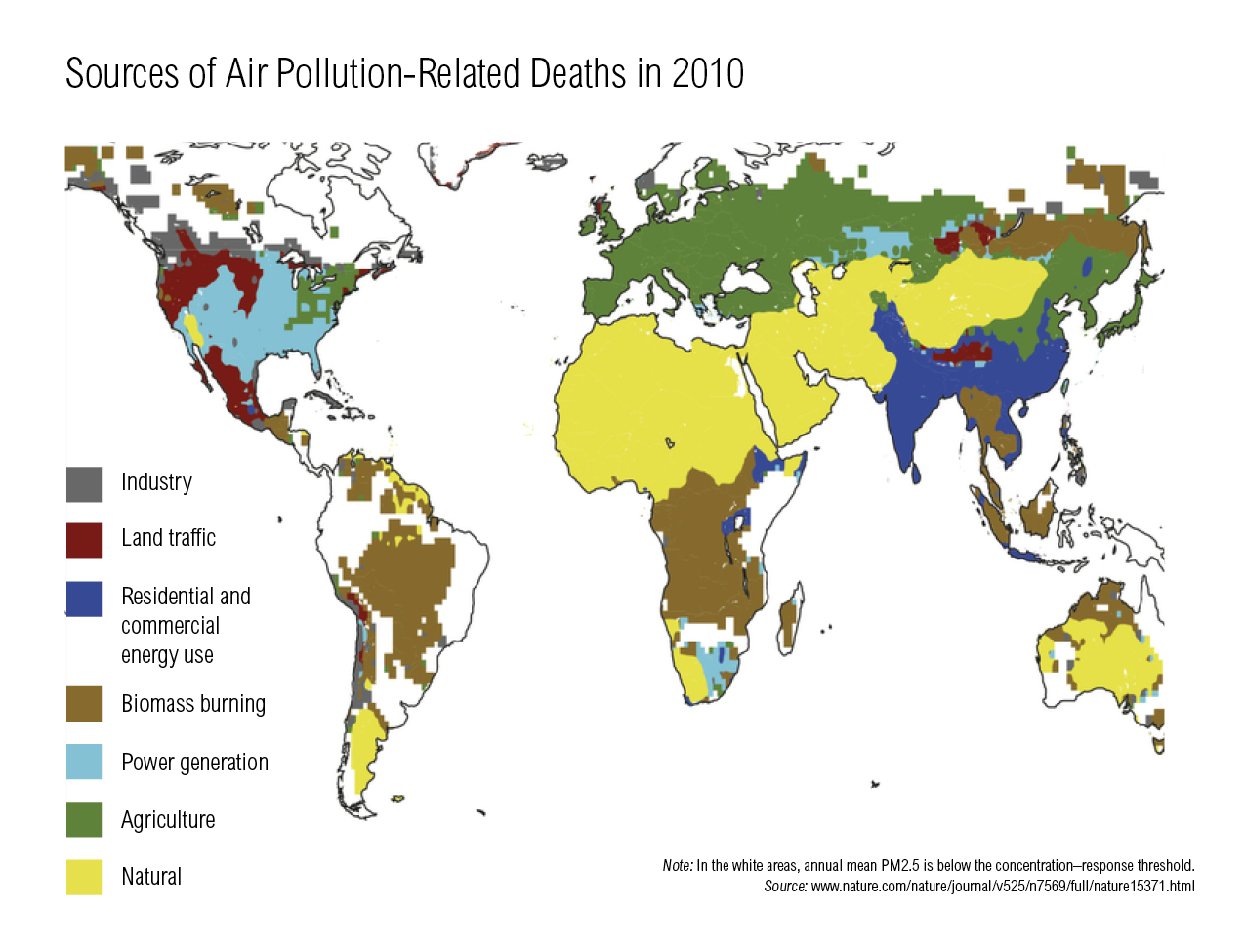 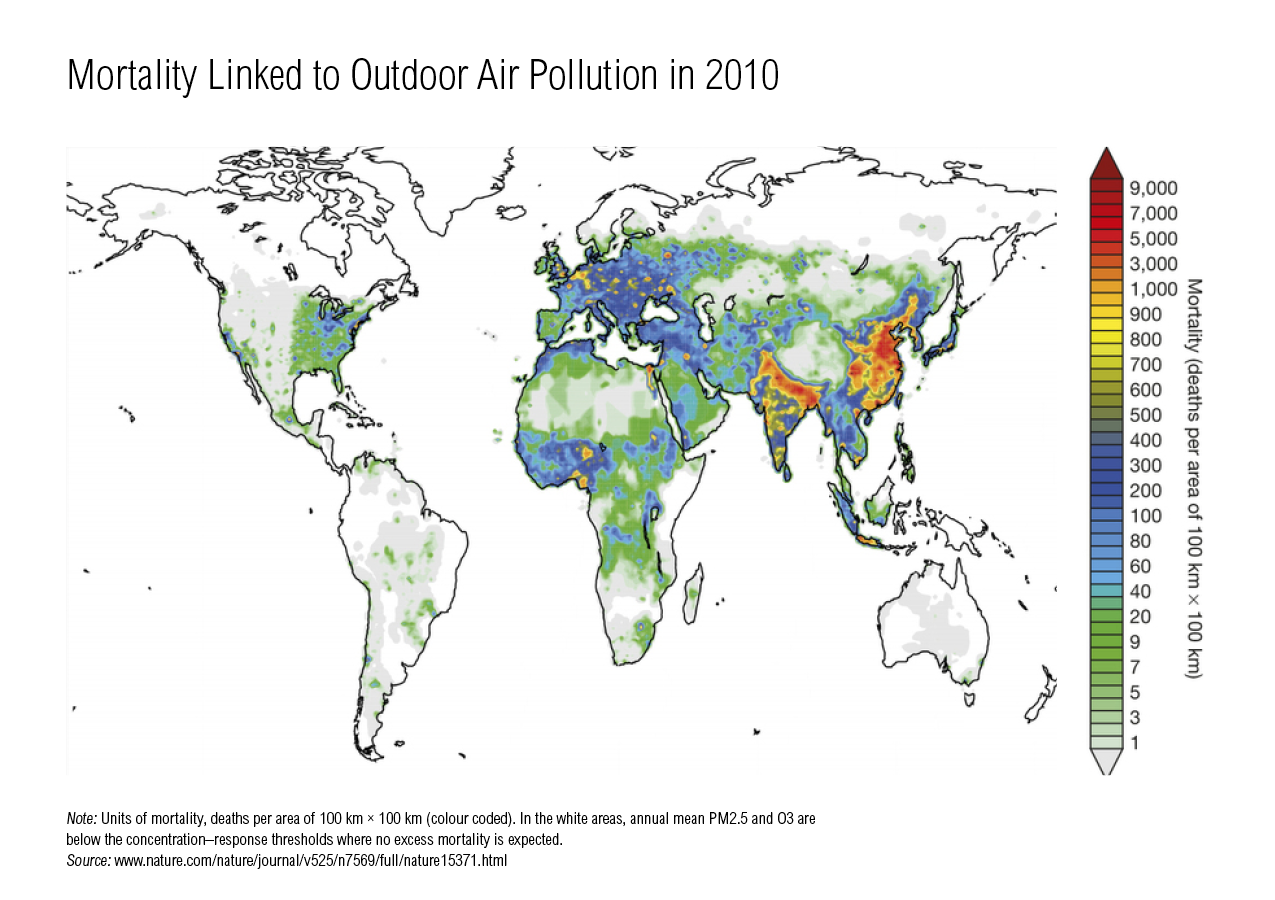 Energy-efficient buildings reduce indoor air pollution because they offer cleaner combustion and better ventilation than traditional buildings. And because they use less energy, they also curb outdoor pollution by reducing the fossil fuel pollution created by power generation. Reduction in indoor and outdoor air pollutants can decrease incidence of illnesses such as asthma and lung cancer, as well as lower the rate of premature deaths. This saves not only lives, but also the financial and social costs of medical treatment and lost productivity.

Efficient buildings—those that make highly productive use of natural resources—are vital to achieving sustainable development. By investing in them today, cities can yield “triple bottom line” benefits—including economic, social and environmental opportunities—long into the future.