China has officially unveiled its 13th Five-Year Plan, which will guide the country’s economic and social development from 2016 through 2020. This latest edition builds on progress made over the last five years, and makes clear that environmental stewardship is an increasingly integral component of China’s development.

The plan lays out targets and measures to address several sustainability challenges—including climate change, air pollution, water, urbanization, transportation and more. The new plan’s high-level targets and policies will continue to strengthen China’s efforts to shift to a more sustainable model of growth and deliver on its climate commitments. Here’s a look at the highlights and importance of the plan for China’s action on energy and climate change:

What are the highlights of the plan for energy and climate?

China plans to develop its economy by more than 6.5 percent per year over the next five years. Under the plan, this growth will increasingly come from services—which will rise from 50.5 to 56 percent of the economy by 2020—and more innovative and efficient manufacturing. These sectors typically have lower air pollutant and greenhouse gas emissions than China’s traditional growth engines, like heavy industry and infrastructure construction.

The plan sets out a new round of targets for the carbon and energy intensity of China’s economy. With China’s new target for an 18 percent reduction in carbon-intensity from 2015 levels, we estimate that China will actually reduce its carbon intensity 48 percent from 2005 levels by 2020, exceeding its original target of a 40-45 percent reduction by that year. It will also be a first step toward achieving its Paris Agreement pledge to reduce carbon intensity 60 to 65 percent by 2030. The plan also includes a goal to reduce energy intensity by 15 percent, suggests that China’s most-developed eastern regions will be the first to peak their carbon emissions, and builds on efforts to increase China’s forest stock. 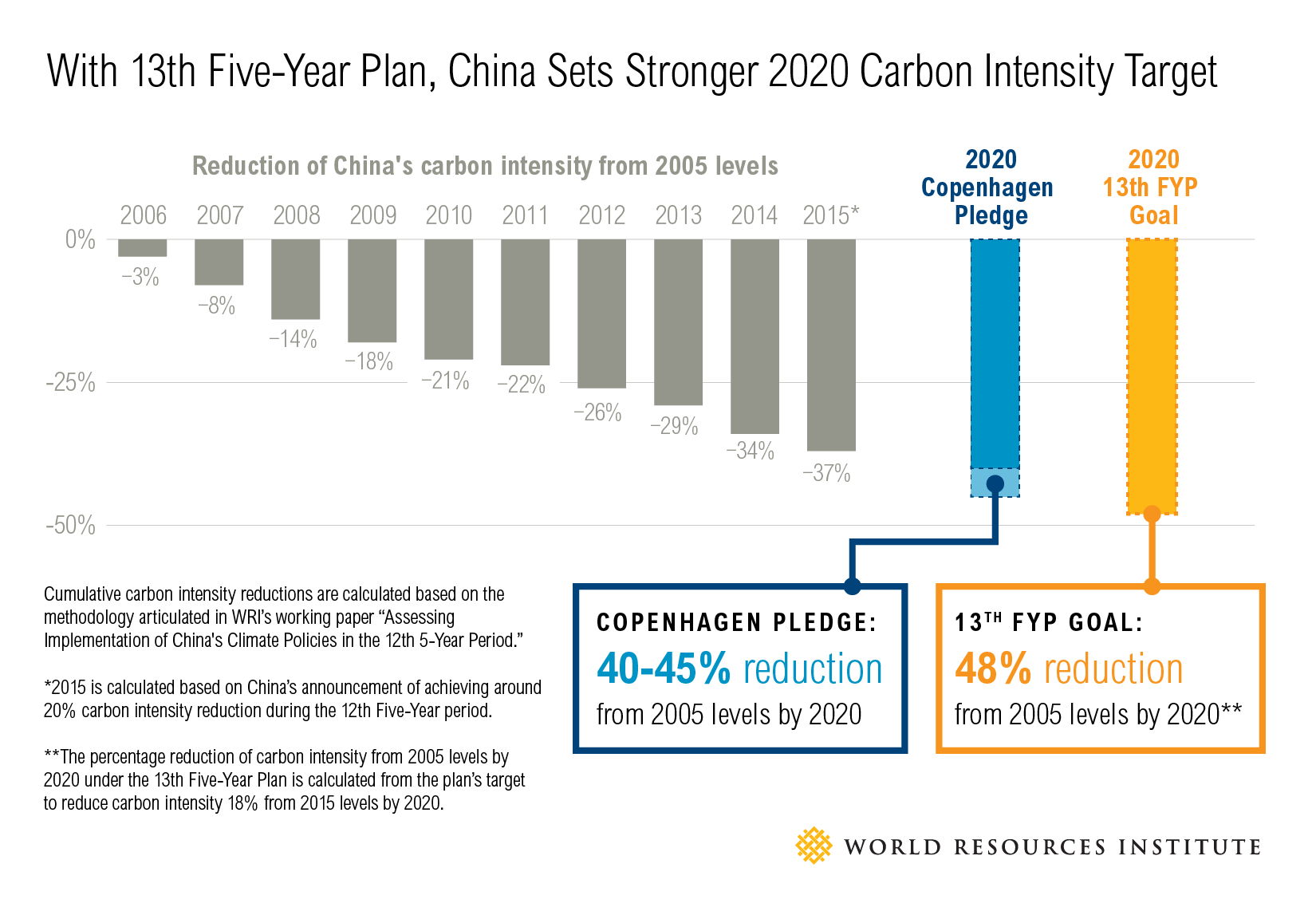 For the first time, the plan includes quantified guidance on energy consumption control, stating that China should limit its energy use to 5 billion tons of standard coal equivalent. As energy is the largest source of carbon emissions, limiting energy consumption is an important component of China’s implementation of its Paris commitments. This guidance seems to be an effort to ensure an upper limit on energy consumption, as there are signs that China’s energy use could be lower than 5 billion tons in 2020. Growth in China’s energy use has slowed in recent years, and China has the potential to achieve its economic goals with less energy through energy efficiency initiatives.

Why are these targets important?

The new targets in the plan underscore the fact that the country is no longer merely concerned with the pace of growth, but with the quality of growth. China’s efforts on sustainable development and climate action are driven by strong national interests, such as concern about the impacts of climate change, hazardous air pollution and energy security. There’s also evidence that China’s leaders recognize the economic benefits of clean energy, and that new drivers will be required for the economy to continue its rapid economic growth.

To achieve these targets, the plan calls for controlling emissions from energy-intensive industries like power and steel, building a unified national carbon emissions trading market, implementing emissions reporting and verification for key industries, and establishing a green finance system, among other measures. The plan also states that China will be actively involved in the global effort to address climate change, including advancing its own contribution, and will deepen its bilateral dialogue with other countries. These efforts will provide momentum toward stronger climate action both in China and internationally.

What are other signs of China’s progress on climate to date?

China has already made substantial progress under the 12th Five-Year Plan, surpassing its targets for energy intensity (down 18.2 percent) and carbon intensity (down 20 percent), according to official figures. Services’ share of China’s economy has risen in recent years, eclipsing manufacturing’s share in 2013. Consumption of coal leveled off in 2014, and output in heavy industries like steel and cement has begun to decline. Further, China is investing in clean energy and installing wind and solar power at world-record levels, making the country the global leader in solar power capacity last year. 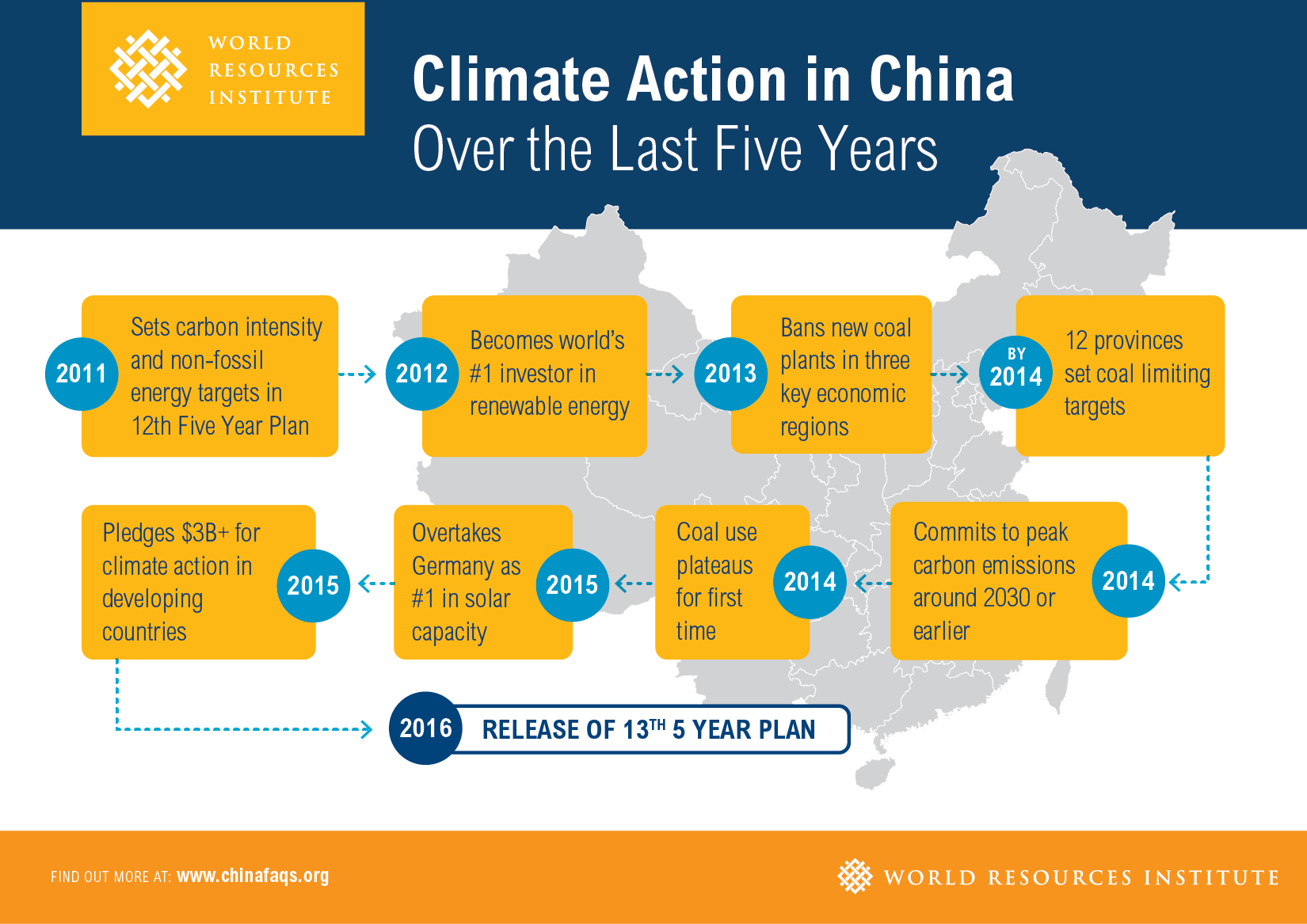 Does the plan contain all the details?

The Five-Year Plan released this week can be thought of as China’s overarching plan, which provides the broad contours of its policies for the next five years. But don’t expect all the details of China’s low-carbon transition to be apparent in this broad plan. Follow-on plans to be released in the coming months and years will provide more detailed targets and policies for specific provinces and sectors, such as energy.

Along with the above-mentioned carbon-intensity pledge, China’s Paris commitments include a target to peak carbon emissions in 2030 and to make best efforts to peak earlier. While making progress, the country’s effort to decouple emissions from economic growth at its present stage of development faces continuing uncertainties. For instance, China’s work to further strengthen measures to improve efficiency and reduce demand in buildings and transportation (including through efforts on high-speed rail laid out in the plan) will be important to offset potential emissions growth from China’s trends toward increased urbanization and vehicle ownership.

Studies make clear that the commitments made by countries do not go far enough to limit warming to below 2°C and avoid some of the worst impacts of climate change. In Paris, countries agreed to come back to the table by 2020 to review their targets. If significant progress were made on addressing remaining challenges during the next five years, then China could be in a position to revise its pledge.

At the same time, the debate over the precise timing of China’s emissions peak may be less important than its continuing efforts to build a foundation for deep emissions reductions over the long term. China is continuing to develop and implement measures that can help achieve this goal, such as limits on coal and energy use, energy efficiency improvements, renewable energy deployment and grid integration, carbon pricing, and steps to shift toward a cleaner model of development. The energy and other sectoral plans following the national Five-Year Plan will provide further opportunities to make progress on these efforts.