While fires in Indonesia may be making headlines recently, unprecedented forest fires have also scorched the Western United States this year, from the pristine forests of Alaska to the rocky desert foothills of California. This summer, fires in California burned hundreds of homes, triggering a state of emergency. Nationwide, more than 8 million acres have burned so far this year, surpassing 2012 as the worst U.S. fire year on record in terms of area burned (records date back to 1960).

While wildfires are a natural occurrence in many of these forests (making them distinct from Indonesia’s forest and agricultural fires), their frequency and intensity have made many experts worried about the forest’s ability to recover. Experts have noted that climate change—leading to higher annual temperatures, widespread tree death due to pests, and extreme drought—means that this year’s unusually intense fires could be a sign of the new normal.

Global Forest Watch Fires (GFW) allows anyone to see the movement of forest fires in near-real time, including data on wind direction and air quality. Whether it’s monitoring a fire burning near your home, watching the direction of smoke blowing towards your city, or studying fire trends from recent years, this information enables citizens to respond quickly and efficiently to the threat of wildfires.

By using Global Forest Watch, we gathered some insights on the fires raging through the United States:

We used Global Forest Watch to examine trends in NASA fire alerts over the past five fire seasons, and to identify how wildfires have impacted forests (the fire alerts indicate heat anomalies within a 1 km by 1 km area that are picked up by satellites, but do not measure the exact extent or intensity of the fire).

Although this year’s fire season is not over, August’s dramatic peak of more than 30,000 fire alerts puts 2015 as the worst fire season in the past five years, mostly due to Alaska’s record-breaking numbers. More than 50 percent of all 2015 fire alerts in the United States were located in Washington, Oregon, California and Alaska, all four of which are experiencing various levels of drought, warm winters and exceptionally dry summers this year. 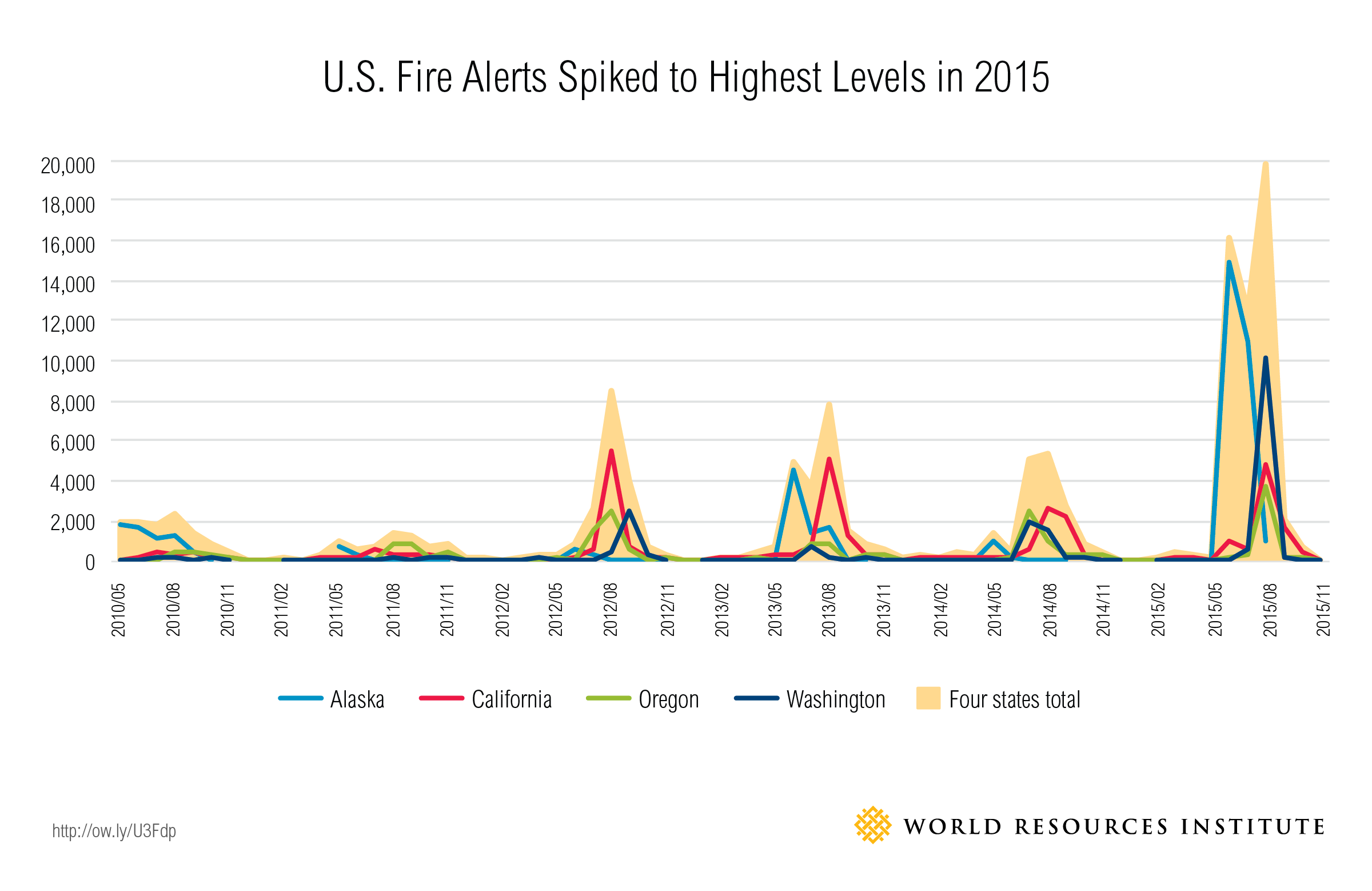 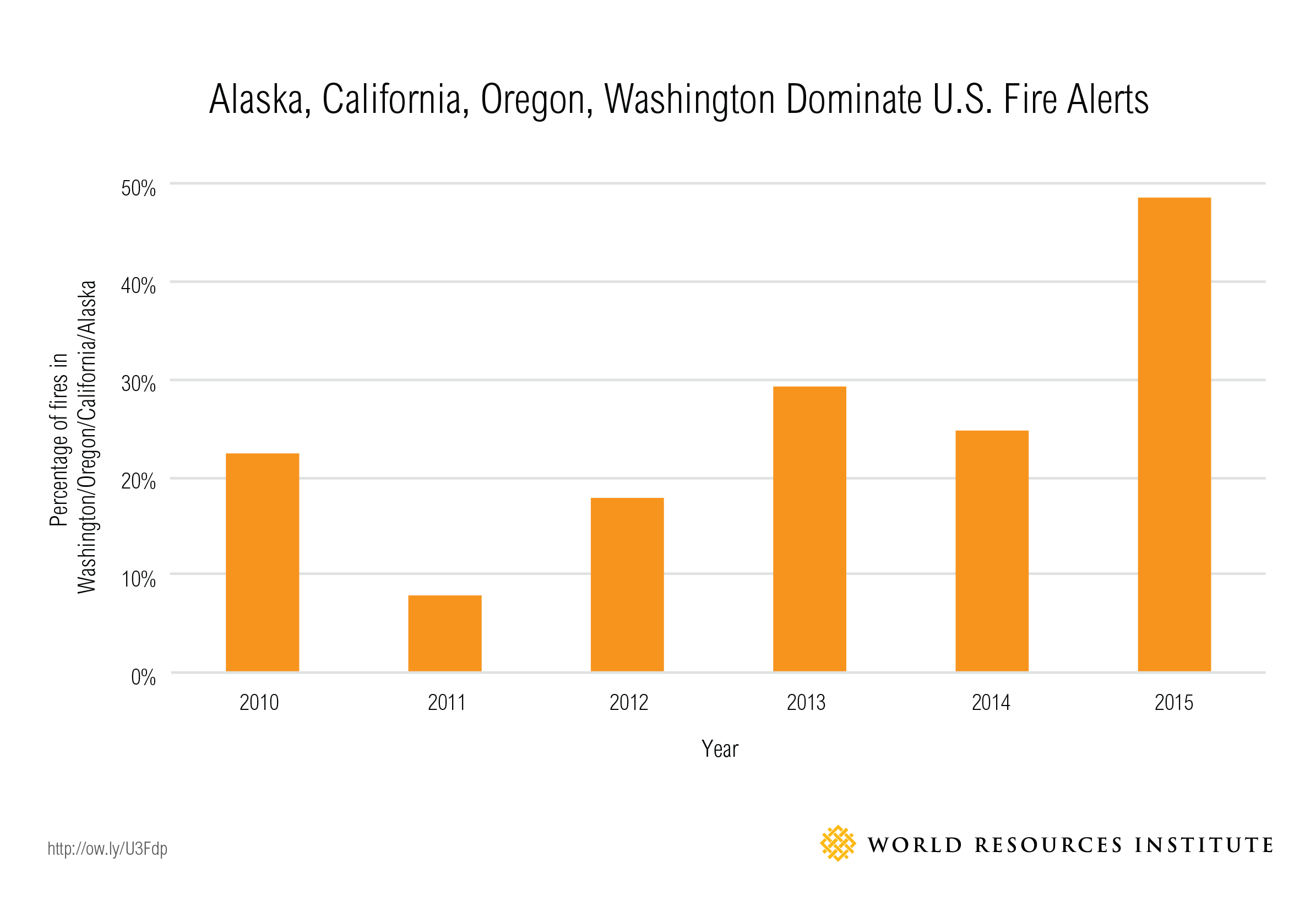 The most alarming example is Alaska, with record-high numbers of fire alerts this summer. Almost 16,000 fire alerts occurred this year alone, far more than in the rest of the western U.S. states combined. A recent study showed that fires in Alaska’s Yukon Flats are more severe than any time in the last 10,000 years.

Intact Forest Landscapes Have Been Hit Hard by Fires

GFW data shows that approximately 41 percent of fire alerts this year have occurred in Intact Forest Landscapes, pristine forest areas untouched by human activity such as roads or extensive logging. Intact Forest Landscapes play a critical role in maintaining biodiversity, regulating the climate and purifying global air and water systems. The largest area of U.S. Intact Forests can be found in Alaska, where more than 2 million hectares (5 million acres) have burned so far this year.

GFW and partners published research showing human activity is disturbing Intact Forests more and more every year, particularly through fragmentation by roads and logging. As development opens up remote areas, previously inaccessible forests like those in Alaska are increasingly in reach of human-caused accidental fires. Although fires are natural, and even necessary in many temperate and boreal forests, the National Park Service estimates that 90 percent of U.S. forest fires are human-caused, potentially altering natural cycles. This may be compounded by climate change, especially given the climate feedback loops created by melting and thawing permafrost, which covers 80 percent of Alaska and stores vast amounts of carbon. 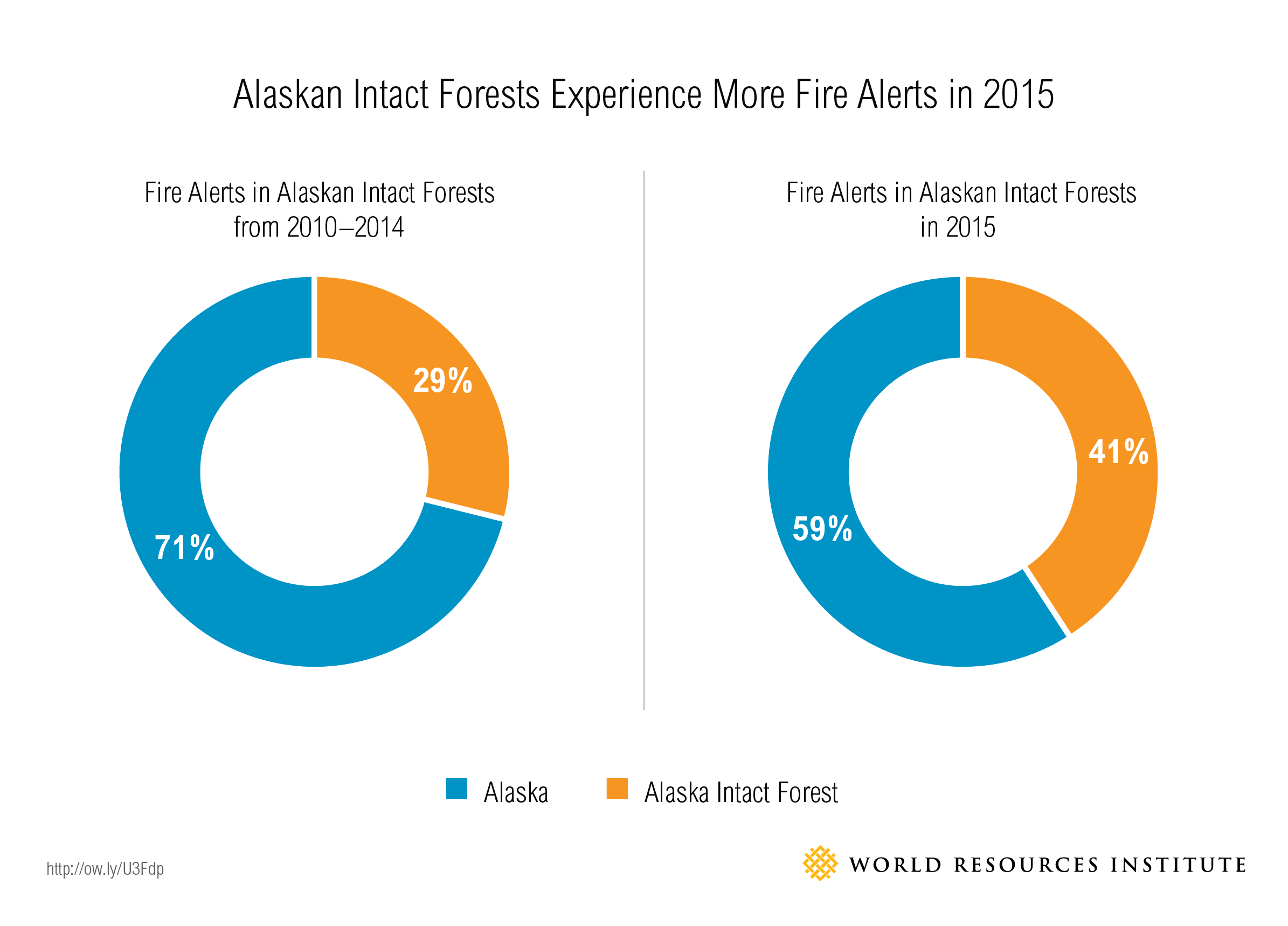 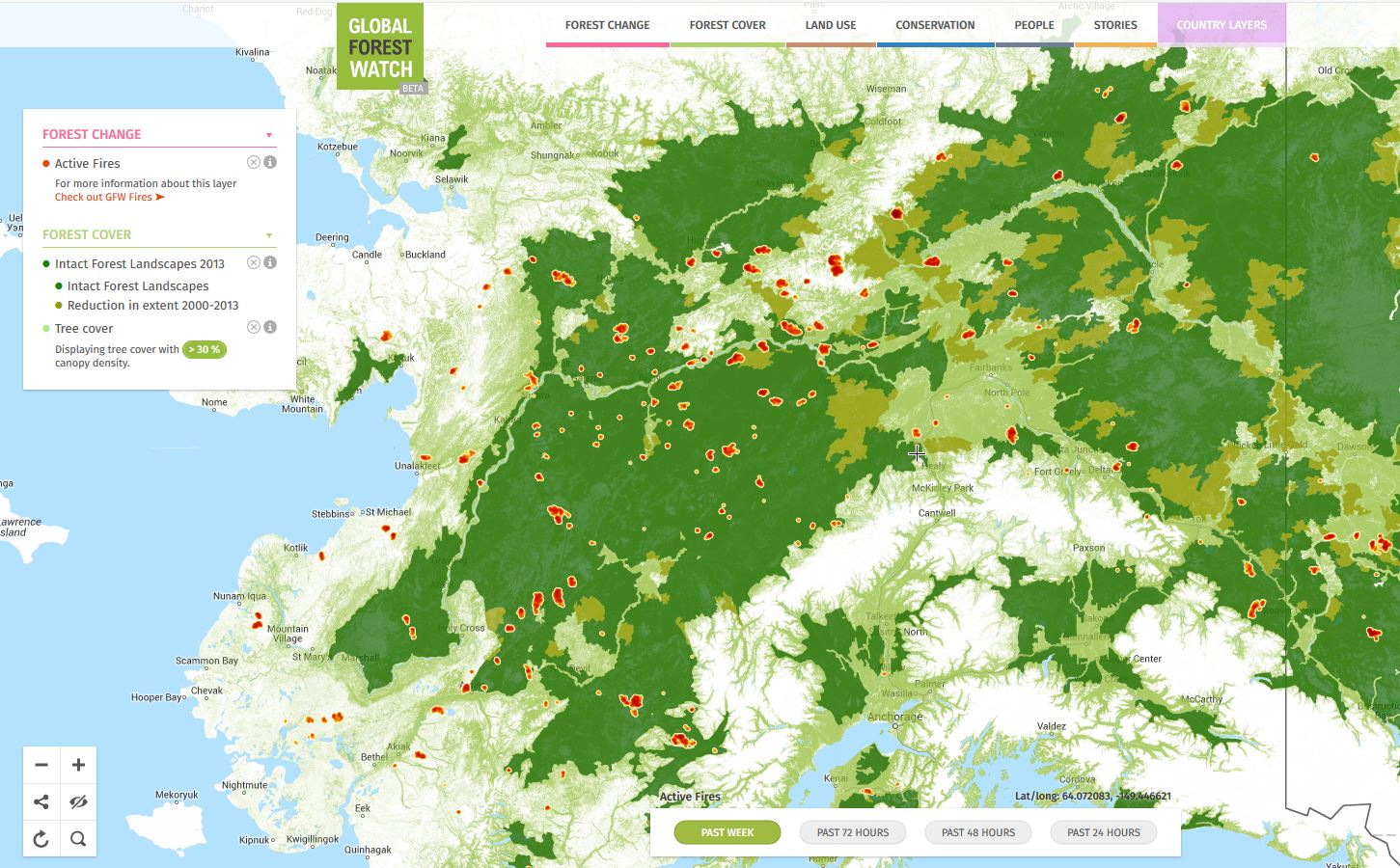 Extreme Fires Can Cause Lasting Damage

While fire is a natural part of many temperate and boreal forest ecosystems, extreme fires can have a lasting effect on the landscape’s natural fire cycle. Recent fires in the United States are larger or hotter than they have been historically, and have repeatedly burned the same land. Therefore trees that may have survived previous fires are being killed, while the trees that might have grown back are hampered by drought and stress from climate change.

Tree cover loss data from the University of Maryland and Google shows large patches of loss in northern California’s major forests, which match with the largest annual spike seen in the graphic above. In fact, the location of every major forest fire in California reported in fire summaries and news coverage from 2012 can be found as a prominent pink swath of tree cover loss on GFW (these data measure tree removal and mortality, indicating where fire may have killed trees). This is an important insight for those that use GFW and seek to understand how tree cover loss relates to fire and other activities like logging. 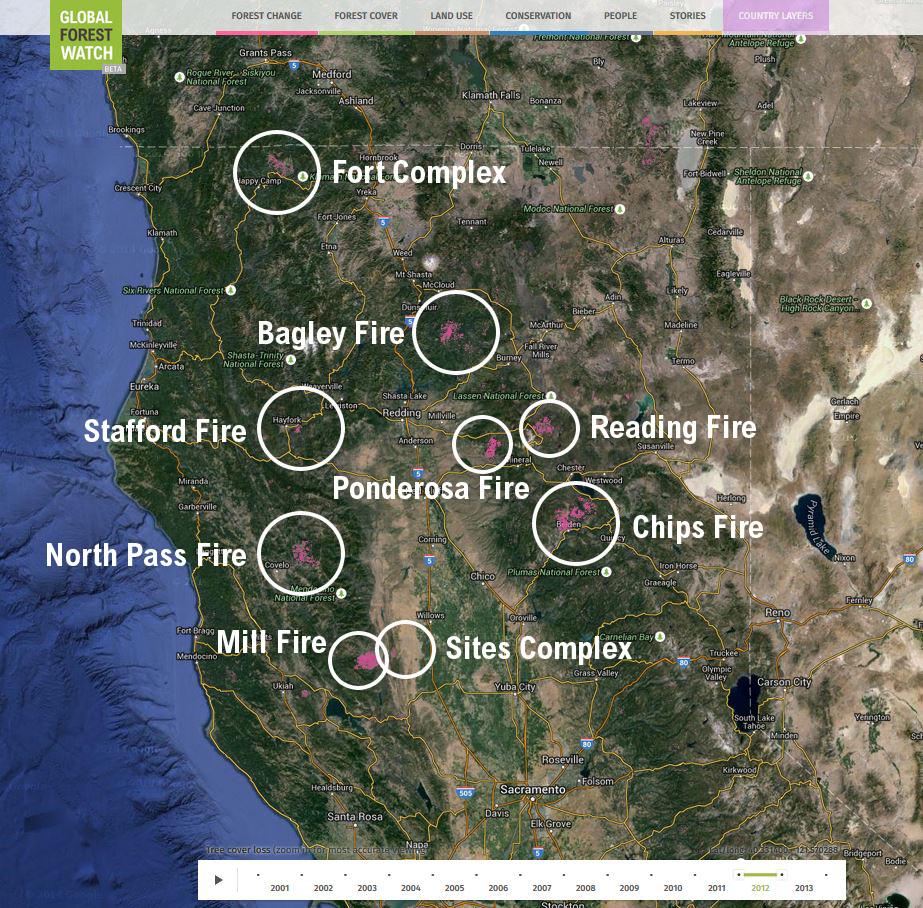 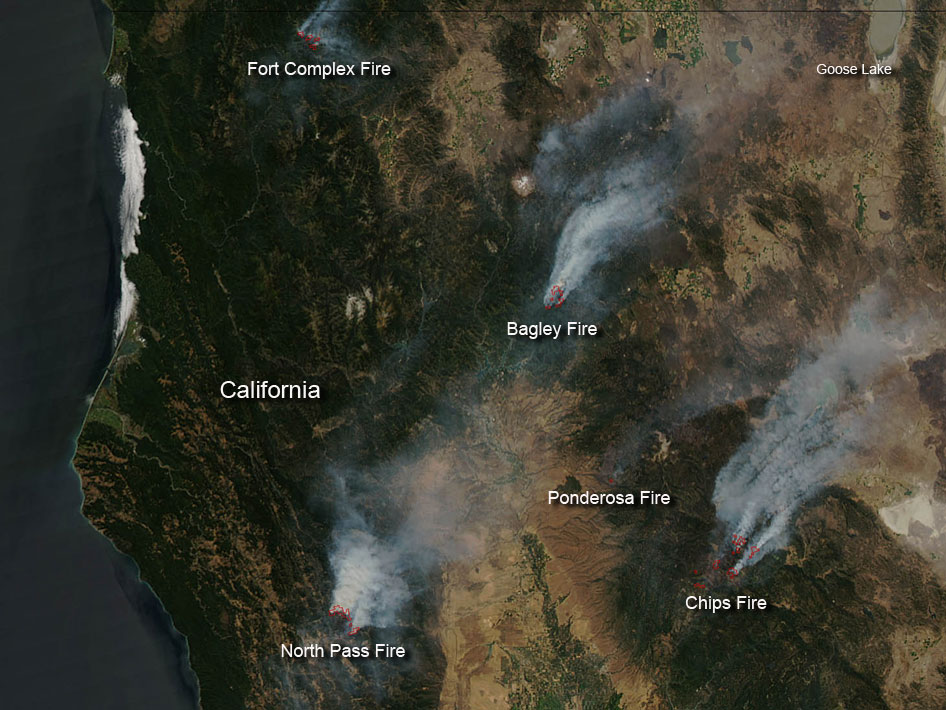 2012 also marked a peak fire season for Washington, with one of the most extensive burn areas around the base of Mount Adams in Gifford Pinchot National Park. Near-real time fire alerts tell us that this area is once again burning. An active fire recently occurred on the northeast side of the mountain and circled the eastern slopes, progressively burning a ring around this wilderness area. Historical tree cover loss and near-real time alerts together provide a powerful tracking tool that allows us to see local trends over time. 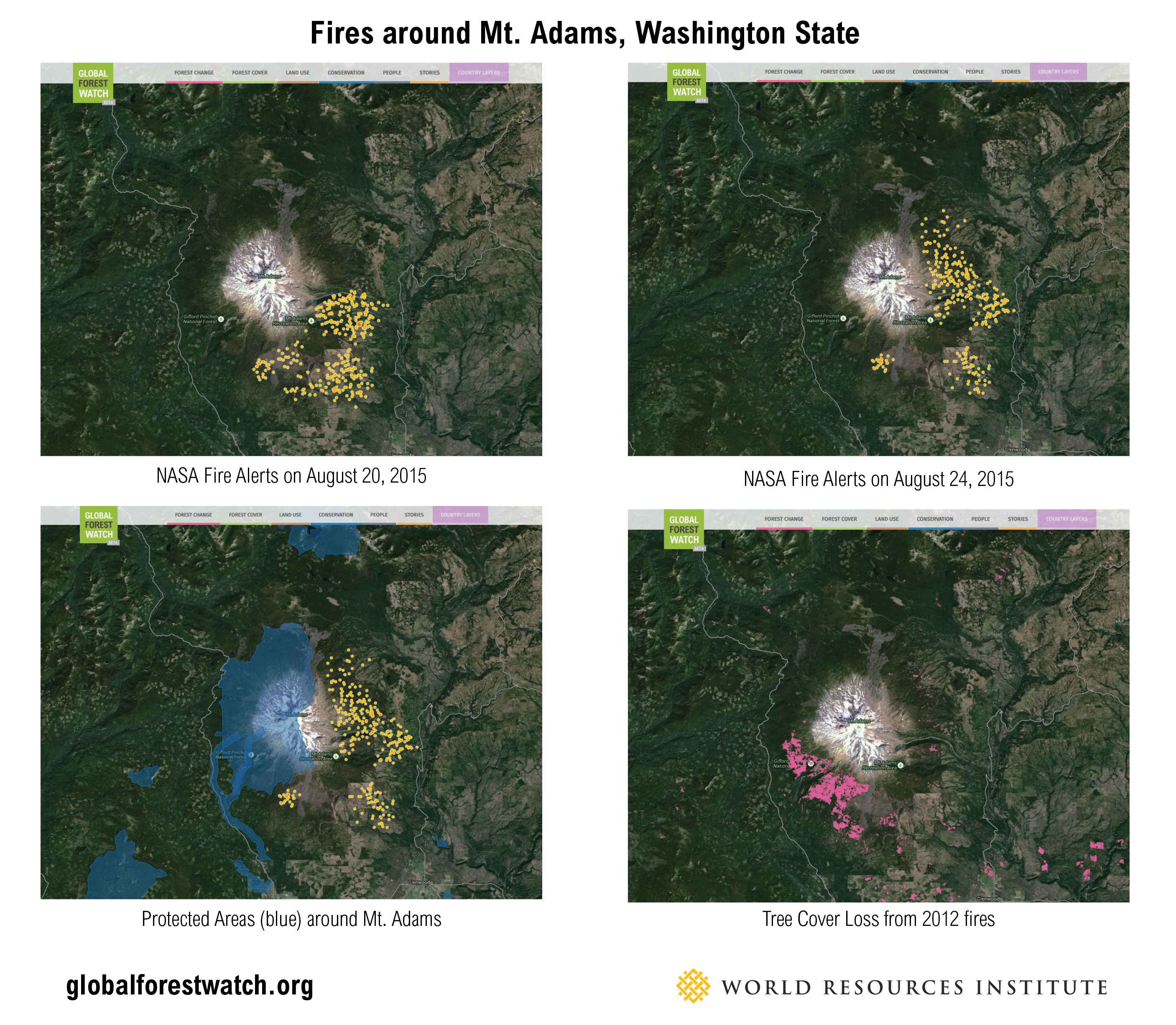 Following Fires as They Happen

Technology has significantly improved our ability to discover fire trends and clearly see the impact of forest fires. With forest fires affecting hundreds of U.S. residences every year, it is increasingly important to access near-real time data to identify where a blaze is happening, determine how the wind direction will blow smoke across local communities, and monitor damages.

While the threats of forest fires may be increasing, better monitoring systems can help prevent blazes from forever altering the American landscape. Visit Global Forest Watch to start monitoring forests in your area.