Brazil has what may seem like a fortunate problem: public finance is too readily available for transport projects. The government financed most of the improved transport for the 2014 World Cup and 2016 Rio Olympics, while the three big public banks accounted for half of all outstanding credit in Brazil.

Readily available public finance can undercut the market and crowd out private investment. Despite policy efforts to develop an attractive legal framework, Brazil experienced a lull in private investment in the mid-20th century. This is a concern because robust private investment in transport can deliver operational expertise and financial capacity that the public sector may lack. Also, private sector know-how can make transport services more efficient. Private financiers may cost more, but they offer higher value for the investment. As Brazil enters a period of economic uncertainty, public budgets may become more constrained. Therefore, mobilizing domestic and international private investment is now a strategic question for Brazil.

One inspiring example of private participation in Brazil’s transport sector is Sao Paulo’s Linha 4, which was designed specifically to integrate disparate transit systems and to improve access to jobs. The project leveraged the existing institutional and legal frameworks in Brazil to attract private investment and was able to procure $1.6 billion in public investment and $246 million in private investment from seven different financial institutions. Using these varied sources of finance mitigated risk and kept the project financially sustainable.

The Sao Paulo metro area is home to 20.2 million people, accounts for 20 percent of Brazil’s gross domestic product (GDP), and has one of the most crowded public transport systems on Earth. The 168-mile system boasts more than 16 million annual trips per mile of track—far more than Mexico City, Buenos Aires and Santiago combined. Besides crowding, there was little integration between the state-owned and -operated commuter rail and metropolitan bus systems, a separate underground rail system and the city’s municipal bus network. 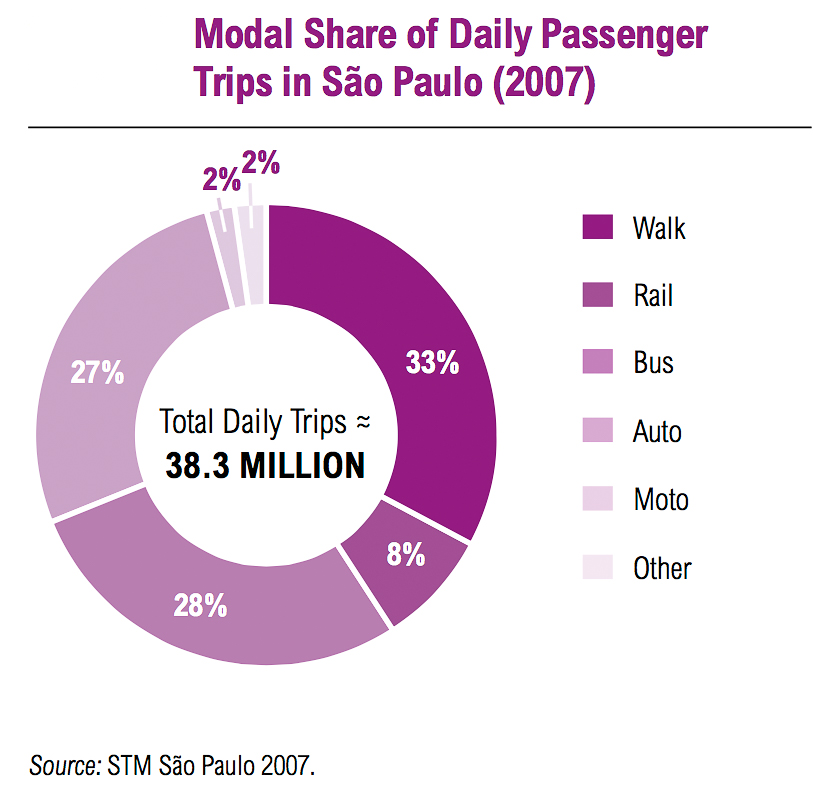 Linha 4, a seven-mile (12.8 km) underground metro line with six stations, was designed to integrate these fragmented public transport systems and increase access to jobs for the marginalized living on the periphery of the city. It was a resounding success. By its second year of operation, Linha 4 met its demand target to serve 700,000 passengers per day and reduced commute times by about half an hour. The metro line had an estimated net present value of $364 million to the local economy and boasted average annual returns of 14.4 percent to the operator and 18.7 percent to shareholders. Most importantly, Linha 4 has demonstrated that public collaboration with the private sector is possible.

Brazil on the Right Track

Investment in transport infrastructure is estimated at US $1.4 – 2.1 trillion annually. While meeting this demand will require action from federal, state and municipal governments, the private sector—often crowded out in these markets—can also play an important role, particularly in countries where public budgets are constrained. Linha 4 is a case in point.

Brazil is on the right track, but increasing private sector investment in transport in Brazil will have to be accomplished through a variety of actions. Promoting stronger legal frameworks, giving local governments the flexibility to implement deals, collaborating with financial partners and development institutions to guarantee the viability of the project, and adding guarantees and mitigating risk all have helped Brazil improve transport infrastructure with the private sector as a key partner.