New, high-resolution satellite-based maps released today by the University of Maryland and Google on Global Forest Watch, a partnership of over 60 organizations convened by the World Resources Institute, reveal a significant recent surge in tree cover loss largely in Russia and Canada during 2013. There is also some good news, with a slowing of tree cover loss in Indonesia, though rates of loss continue a troubling rise across the tropics as a whole. These 2013 data are the first annual update to the influential “High-Resolution Global Maps of 21st-Century Forest Cover Change” published in Science, and are the latest globally consistent estimates of tree cover loss available.

So what do the data say? Much analysis remains to be done, but here are five immediate highlights:

Tree cover loss is a measure of the total loss of all trees within a specific area regardless of the cause. It includes human-driven deforestation, forest fires both natural and manmade, clearing trees for agriculture, logging, plantation harvesting, and tree mortality due to disease and other natural causes. Tree cover gain also happened during 2013, but is not included in the 2013 update or this analysis as it is more difficult to monitor than loss. Much of the tree cover loss is only temporary, as forests regenerate after disturbances such as fire, though in the boreal region this is a very slow process. 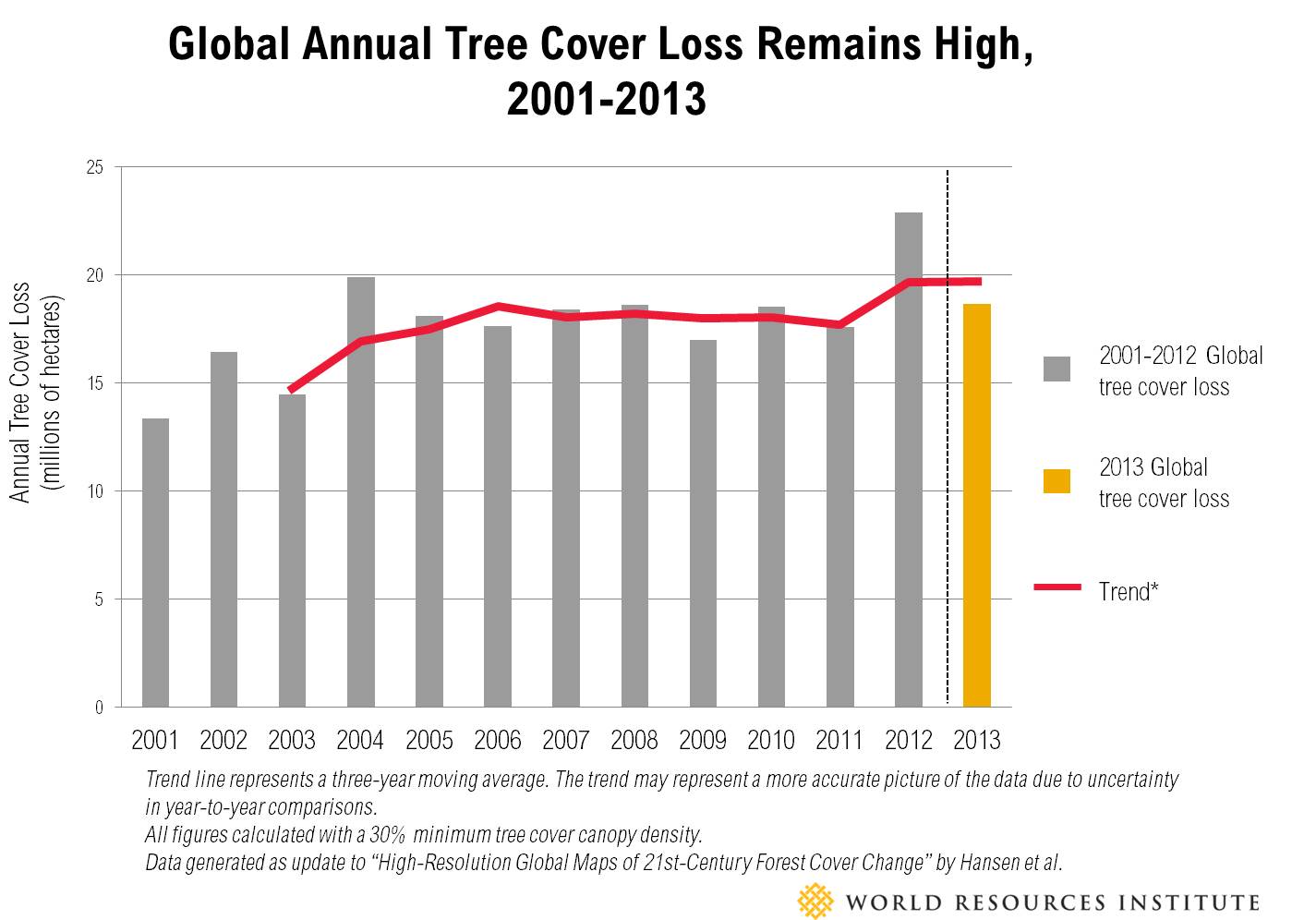 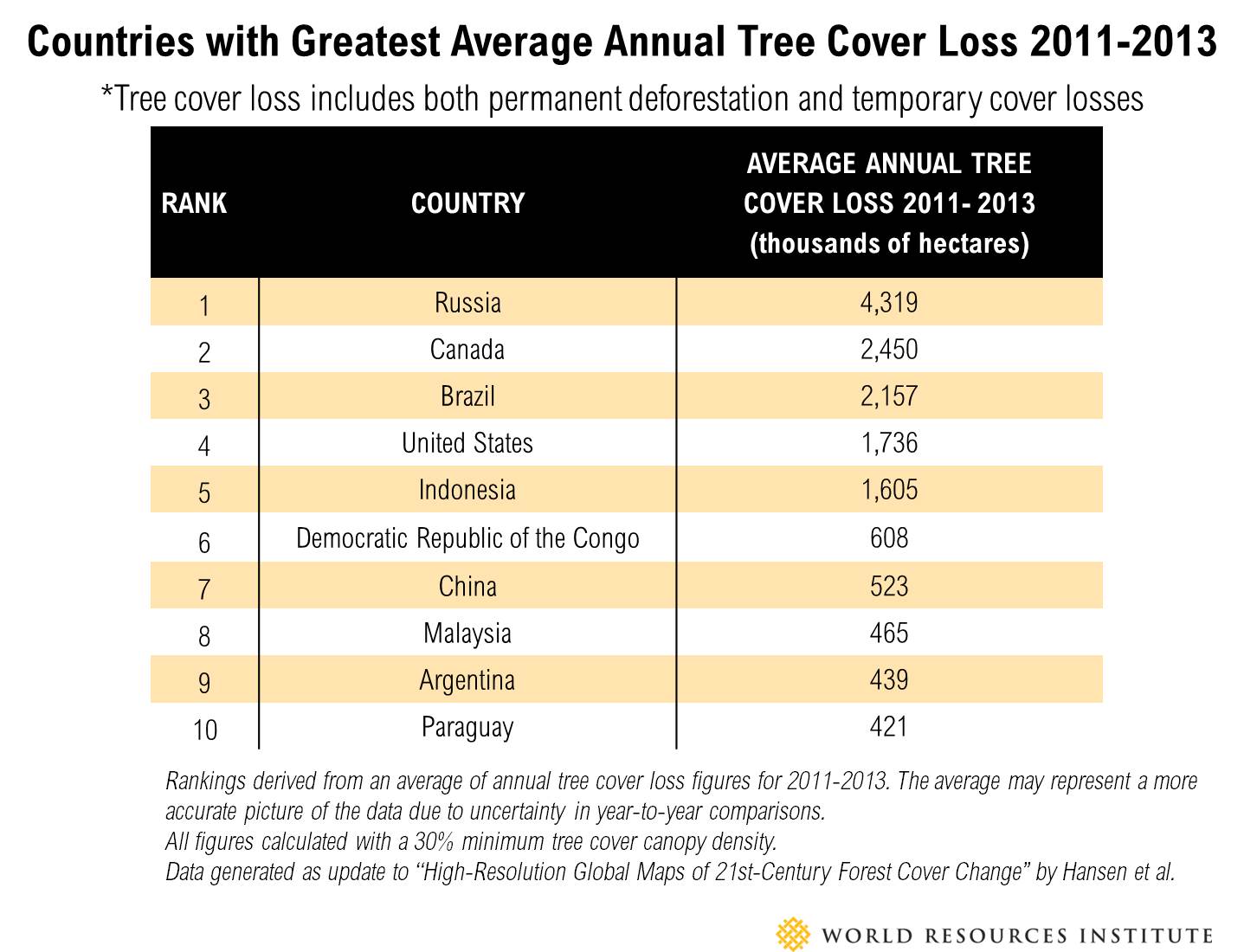 Why focus on trends and averages instead of 2013 as a standalone year?

Clouds literally get in the way of what satellites can “see,” especially in the humid tropics where clouds can obscure the view below for much of the year. That means that occasionally trees may be felled or burned under the cover of clouds and it may not be detected until the following year.

Users of the data can smooth out such uncertainty by examining the average over multiple years (we use a three-year moving average in the charts).

Tree cover gain was not updated in this new data because it is difficult to measure on a year-to-year basis due to the slowness of regrowth. In the future, we plan to update tree cover gain every three years.

The new maps show a recent increase in tree cover loss in parts of the world’s boreal forests in Russia, Canada and Alaska. Although the tropics had more tree cover loss overall, the boreal region showed the steepest increase of loss of any region. Russia (which at 882 million hectares has the biggest area of tree cover in the world) lost an average of 4.3 million hectares (16,600 square miles) of tree cover per year between 2011 and 2013, an area larger than Switzerland. Fires in the boreal are partly natural (natural fire dynamics play an important role in boreal forests) and partly man-made, with climate change and infrastructure increasingly having an impact. The forest will grow back, but this process takes centuries. 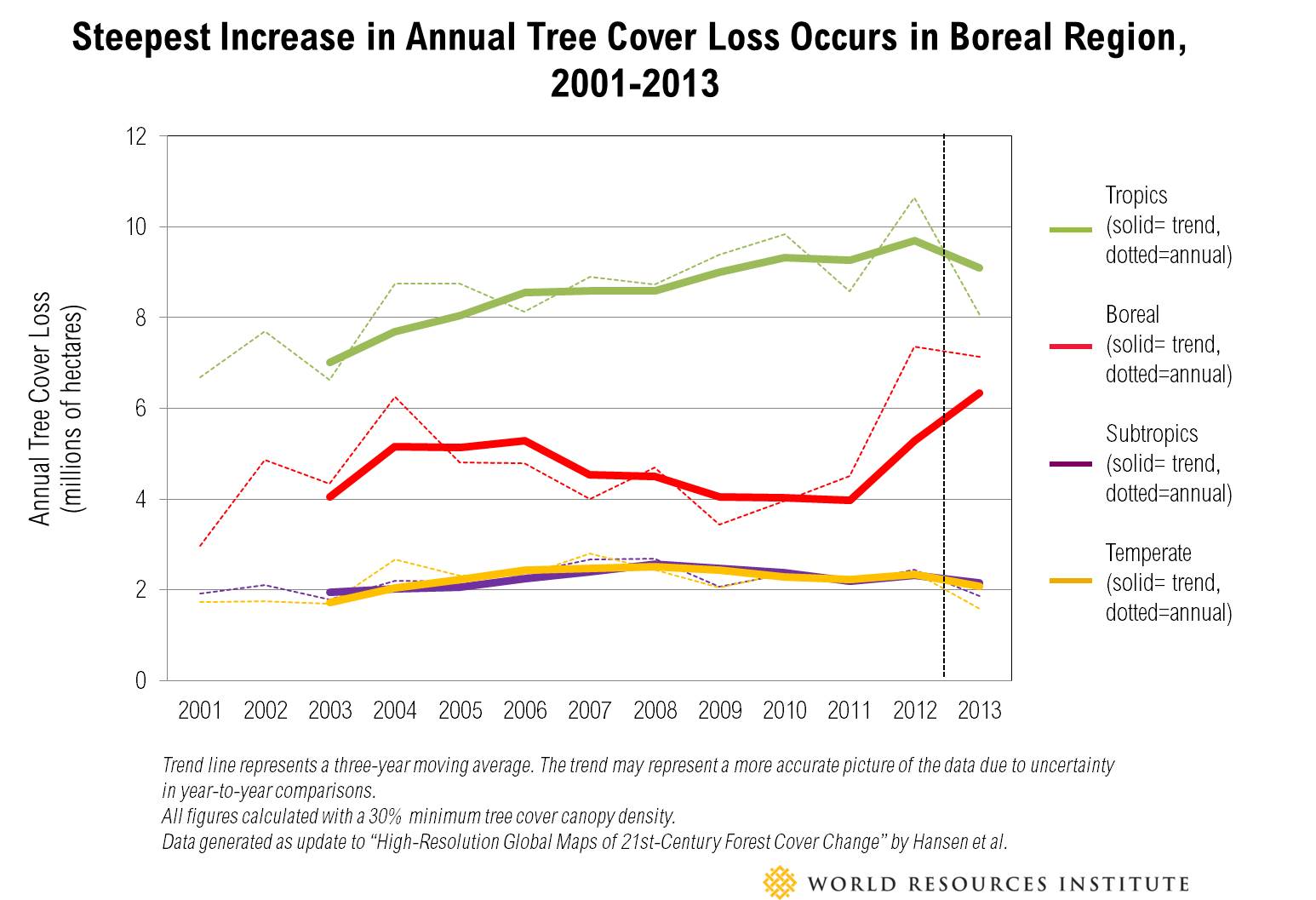 Although the new data do not identify the direct causes of tree cover loss, studies found fires in recent years accounted for around 70 percent of total tree cover loss in

and Russia. The area and number of fires in boreal regions vary widely from year to year. The Natural Resources Canada’s Canadian Forest Service estimated forest fires burned 4.2 million hectares (16,216 square miles) in 2013. Russia’s United Interagency Statistical Information System reported between 3.9 and 6.2 million hectares of burned forest area each year from 2010 to 2014, with a spike of 11 million hectares in 2012. These areas are larger than the tree cover loss estimate from the University of Maryland, possibly due to different mapping methods, different definitions of forest, re-burning of areas where trees have already been killed, and because not all fires kill trees.

Researchers have predicted that climate change could increase the frequency and intensity of boreal wildfires in the 21st century, producing more late-season fires that

Forest fires can also influence the climate. Although the exact relationship between boreal forest fires and the climate is still uncertain (for example, removing trees may also potentially increase albedo and lead to cooler temperatures), larger and more frequent forest fires do generate more greenhouse gas emissions from burning trees and peat soils. Leading scientists at NASA and elsewhere estimate that the overall effect will be to warm the climate.

It is too early to call this spike a trend. Further research is needed to determine the drivers and estimate impacts of the forest fires, which tend to be highly variable over time and affect some boreal areas more than others. Fires can be tracked daily through Global Forest Watch.

In addition to fires, logging and pests also account for some of the spike in tree cover loss in the boreal region. 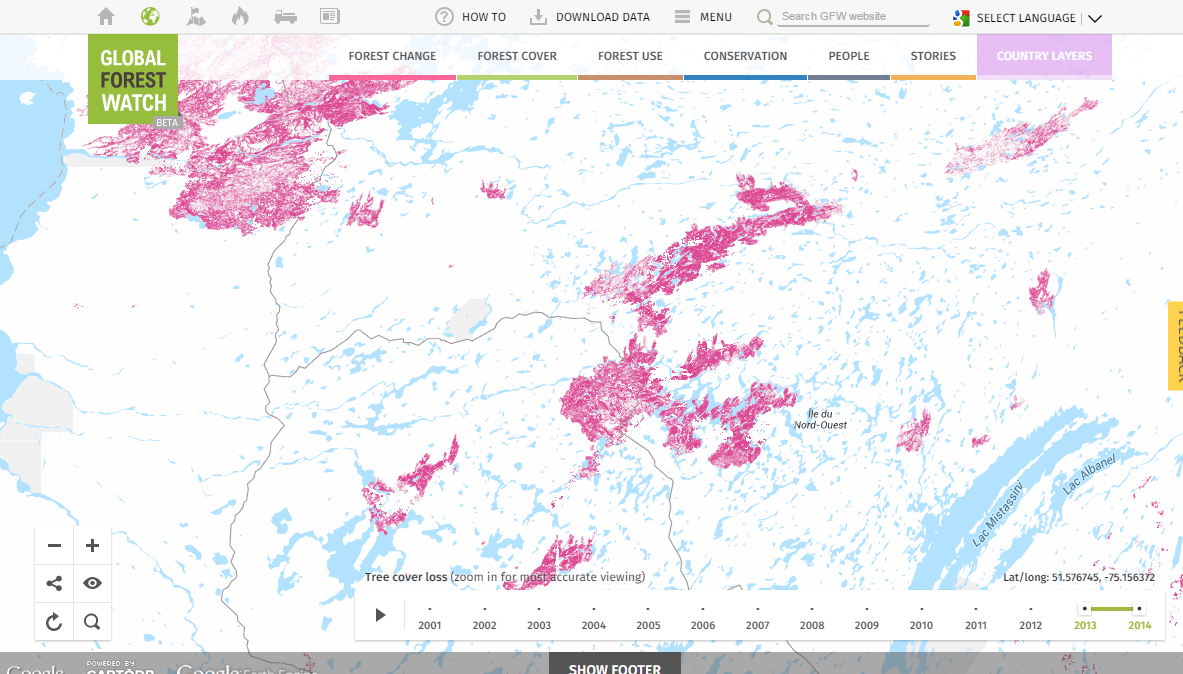 Indonesia’s annual tree cover loss declined in 2013 to the lowest point in almost a decade, pulling the three-year average down to 1.6 million hectares (6,200 square miles) of annual tree cover loss. In addition to a slowing of total tree cover loss, Indonesia’s loss of primary forests slowed to an average of less than half a million hectares per year from 2011-2013, the lowest in the last decade. Primary forests are mature, natural forests that have not been cleared in the past 30 years, and Indonesia’s represent some of the most biodiverse and carbon-rich forests on earth. The drop is surprising, since research published last year by the University of Maryland and WRI showed Indonesia’s loss of primary forests increased rapidly from 2001-2012. A single year, however, does not make a trend. Global Forest Watch will soon publish 2014 data, key to further interpreting the 2013 information.

It is also too soon to say what may have triggered the decrease. A deeper examination into many potential factors is warranted, including the effects of a much-applauded moratorium on new licenses for forest conversion, a significant decline in agricultural commodity prices (especially for palm oil), corporate zero-deforestation commitments and the fact that much of the most accessible forests have been already cleared. 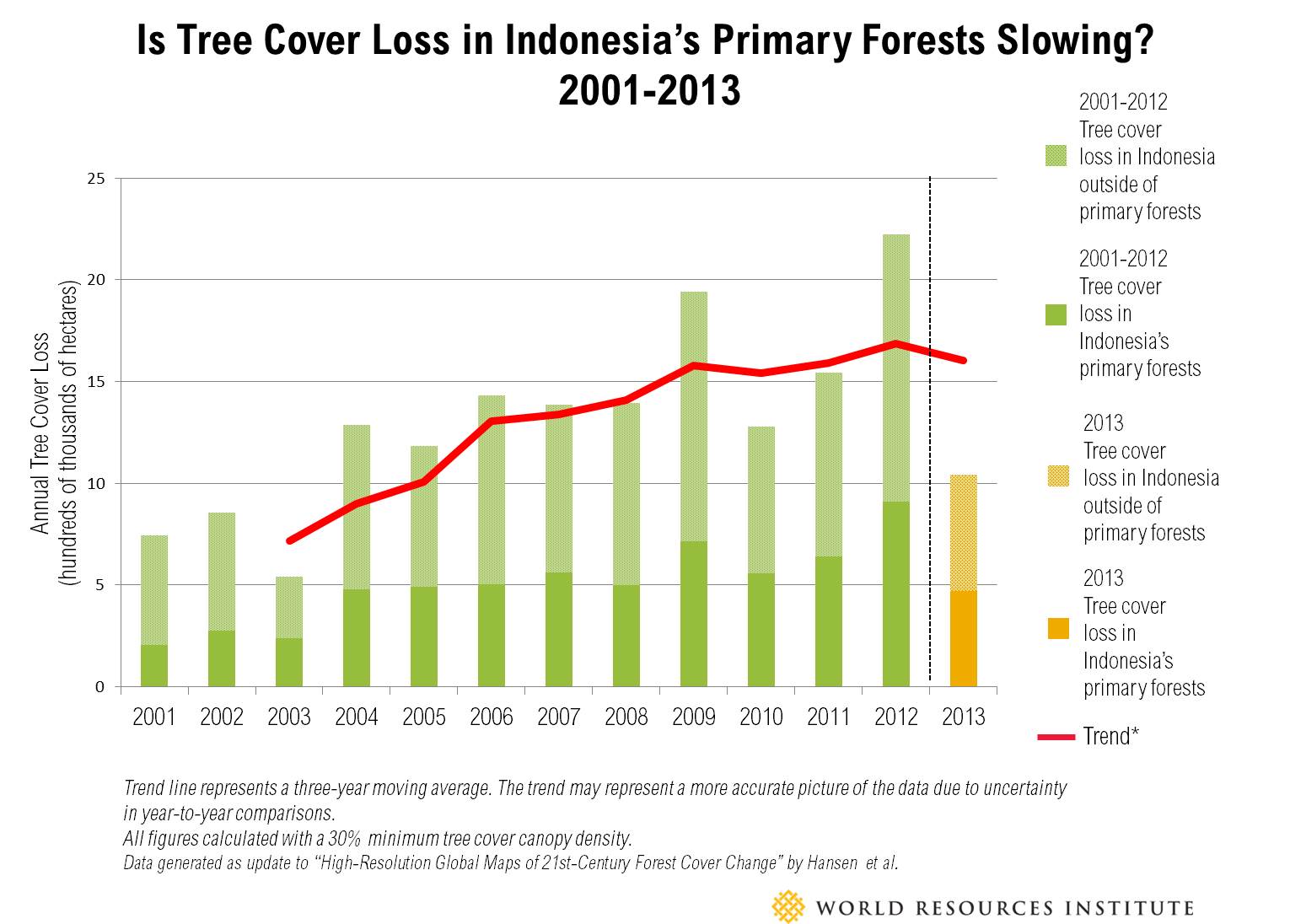 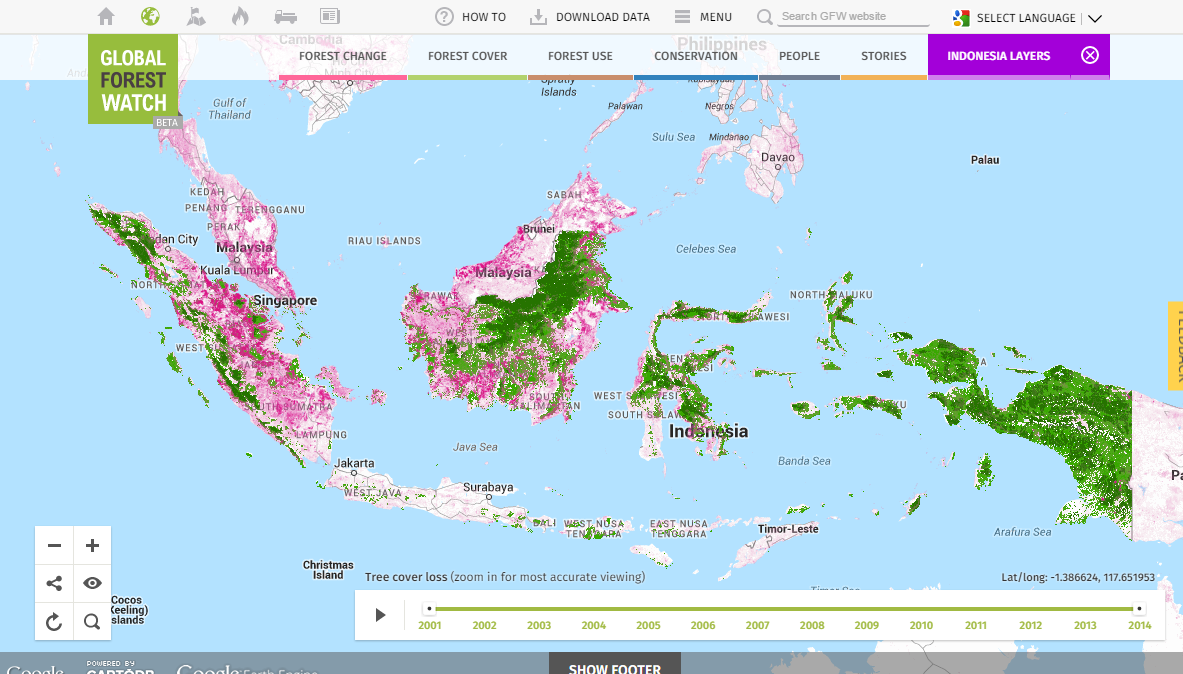 In addition to releasing data for 2013, the University of Maryland and Google have released reprocessed tree cover loss data for 2011 and 2012 using a new, improved algorithm and satellite imagery following the launch of NASA’s Landsat 8. The calculations of tree cover loss for those years have been updated on the GFW country pages and the map.

Read our technical blog on the revisions and see the technical notes on Google Earth Engine.

The Future of Monitoring the World’s Forests

Decision makers around the world can now use this new information to better inform policymaking. In the next few months, more up-to-date 2014 data will be added to Global Forest Watch. Tree cover loss for 2015 can already be monitored through near real-time alerts such as FORMA, Imazon SAD alerts, and Terra-i alerts, all available on Global Forest Watch thanks to the efforts of our many partners. Higher-resolution, higher-frequency, low-cost imagery is also becoming increasingly available. Global Forest Watch will soon be announcing some new partnerships with companies innovating with such data.

The fate of the world’s forests rests partly on the steady progress of scientists in monitoring change and partly on policymakers using this information wisely. It also depends on people on the ground calling for good governance and secure land and resource rights, stopping the trade in illegal wood, and shifting to more sustainable systems to grow food and produce commodities. Global Forest Watch aims to support these efforts through apps such as Global Forest Watch Commodities and Global Forest Watch Fires. Join the movement by exploring the data today. We always welcome your feedback on how we can improve the system.

Read our technical blog on the data update, or learn more about the researchers at Google Earth Engine Partner page.