The word “forest” often calls to mind a dense landscape of towering trees. However, some of the most carbon-rich and productive forests are clustered along coastlines in the tropics and subtropics. Mangrove forests, made up of salt-tolerant trees and shrubs, play a vital role in erosion and flood control, fisheries support, carbon storage, biodiversity conservation and nutrient cycling. Many coastal communities rely on mangroves for food, forest products and tourism revenue, and the forests provide a natural coastline defense to storm surges by reducing wave and wind velocity.

New analysis relies on satellite data to survey the state of these important ecosystems. Using Global Forest Watch (GFW), an online forest monitoring platform, we found that the world lost 192,000 hectares (474,000 acres) of mangroves from 2001 to 2012, a total loss of 1.38 percent since 2000 (or 0.13 percent annually). This is a relatively low rate of loss compared to the rate of tropical deforestation, which stands at a total of 4.9 percent from 2000 to 2012 (or 0.41 percent annually). The tropical deforestation rate was calculated using the same tree cover loss data as the GFW analysis, and considered forests with more than 25 percent canopy cover. 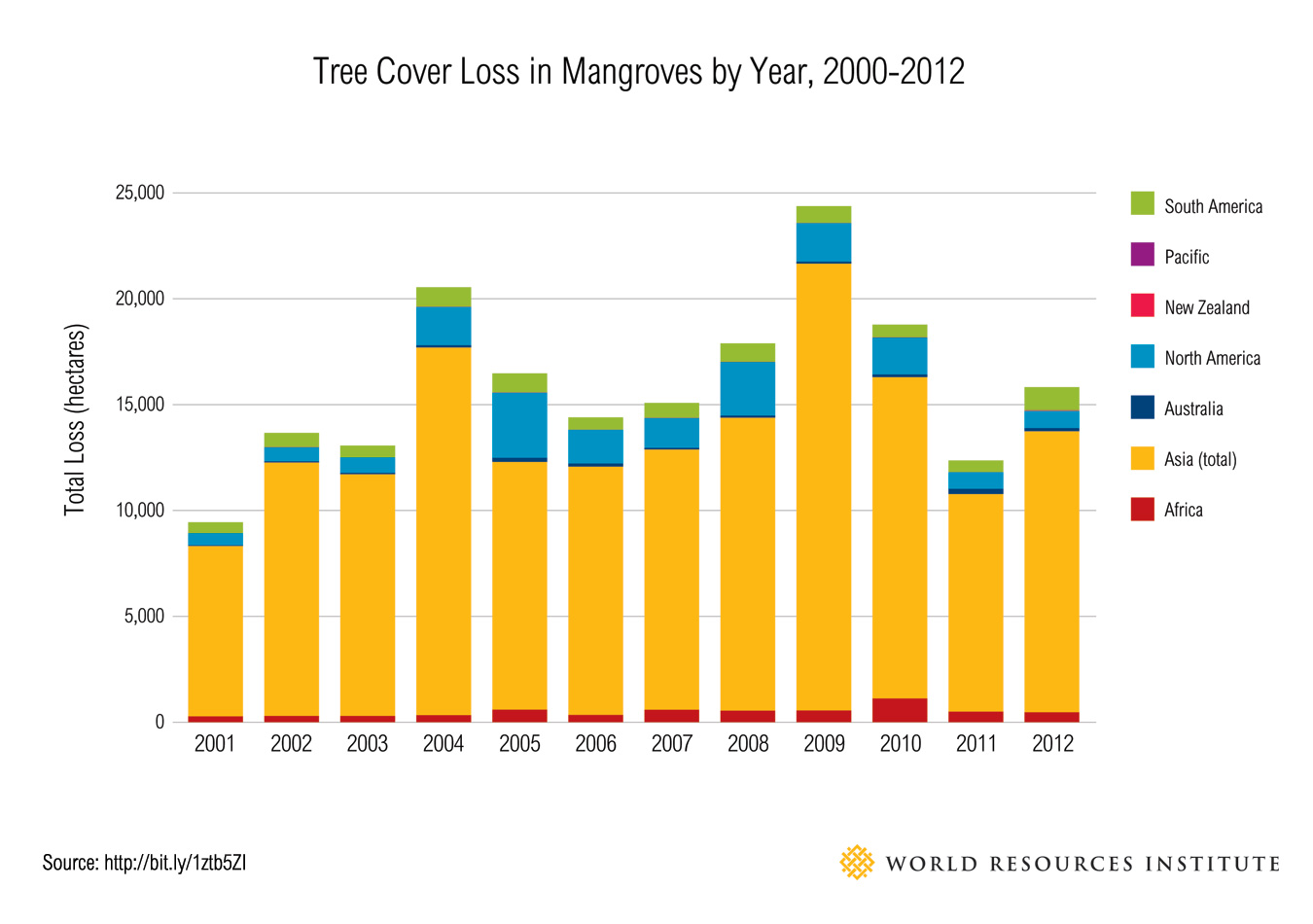 Advances in satellite remote sensing of forest cover offer new opportunities to monitor changes in forests with far better consistency and accuracy than ever before. Our analysis relied on the 2001-2012 satellite data of global tree cover loss from University of Maryland and Google, overlaid on mangrove extent data mapped by Chandra Giri and collaborators and distributed by the United Nations Environment Programme.

Annual updates to the global tree cover loss data present the opportunity to monitor forest change in mangrove ecosystems on a consistent basis. And mining archives of satellite imagery offer the potential to map historical changes, adding clarity to the state of mangrove loss prior to 2000. While previous studies have estimated mangrove forest loss prior to 2000, we choose not to compare our estimates with these findings due to differences in analytical methods.

In addition to quantifying total global loss of mangroves over the last decade, a few trends emerge:

Asia Has the Highest Rates of Mangrove Loss

Asia is a hub for global mangrove loss, with annual loss rates nearly double the global average. More than half of the mangrove loss over the past decade occurred in the Asia Insular region, comprised of Indonesia, Malaysia, Papua New Guinea, Solomon Islands, Brunei, East Timor, Singapore and the Philippines. This region also boasts the world’s largest mangrove area, with exceptionally high biodiversity and enormous carbon-storage potential. It’s particularly suitable for mangrove growth because of its extensive coastlines, abundant islands, high rainfall and significant freshwater sources. 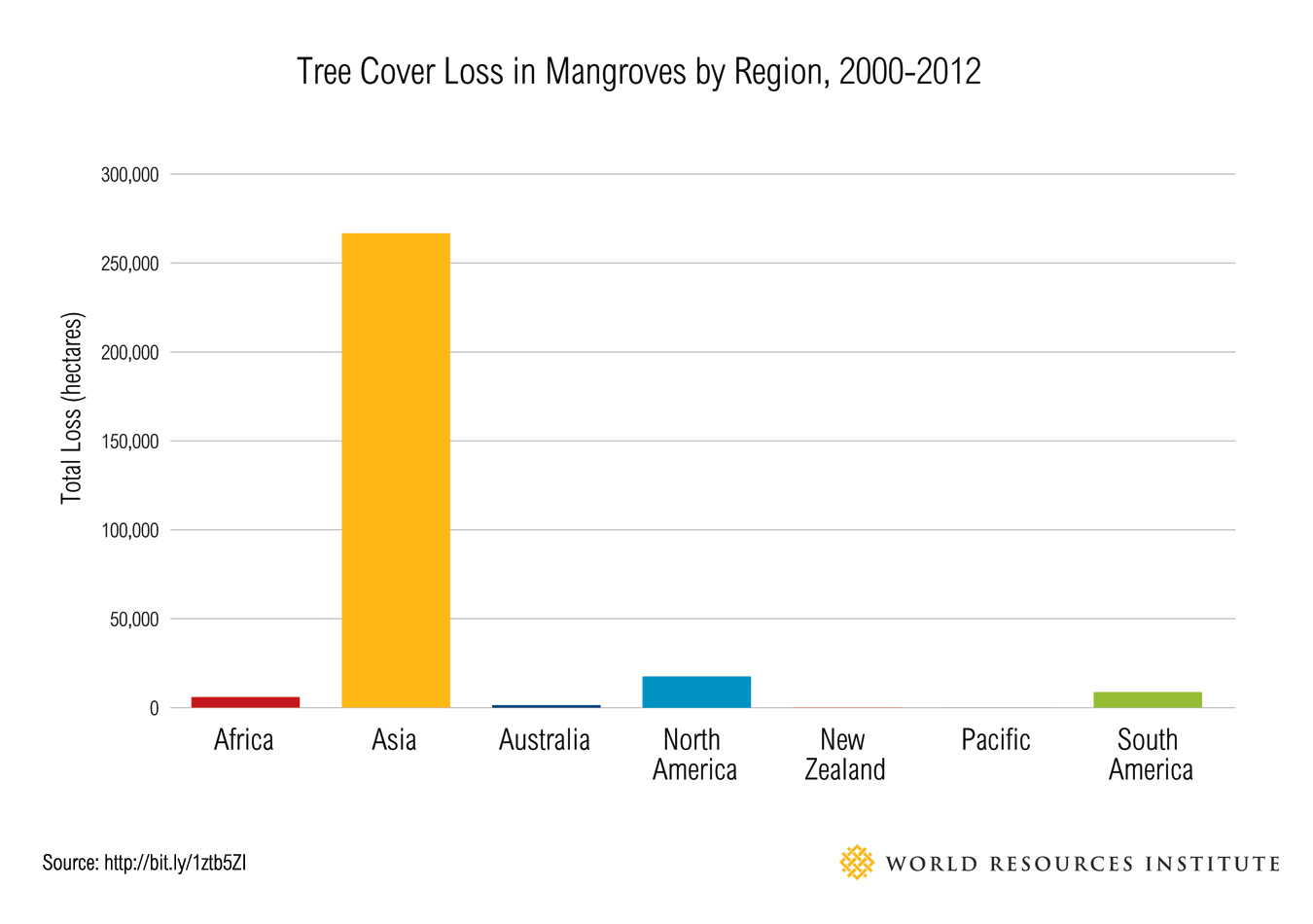 However, human pressures threaten Asia’s mangroves. The aquaculture industry is one of the fastest-growing animal-producing sectors in the world, and as it’s grown, so have concerns about its impact on mangroves and other ecosystems. In the 1980s and 1990s, a largely unregulated boom in shrimp aquaculture led to a clearing of a significant area of mangroves for aquaculture ponds. Fortunately, mangrove conversion to aquaculture has greatly slowed since the year 2000, thanks to improvements in shrimp-farming practices and mangrove protection policies. Still, it’s an ongoing challenge to reconcile plans for aquaculture expansion with mangrove protection in the region.

Agricultural expansion is also a major cause of mangrove loss in Asia, such as through palm oil plantations’ encroachment. Oil spills and other chemical pollution, such as fertilizers and pesticides from nearby farms, also pose threats to Asian mangroves, while growing populations increasingly impact mangrove habitats through coastal and urban development.

The Sundarbans, however, stands in contrast to the Asian region as a whole. The region is the world’s largest area of mangrove forest, spanning approximately one million hectares (2.47 million acres) in India and Bangladesh. The forest is a famous biodiversity hotspot, harboring 270 species of birds, 35 reptiles and 42 mammals, as well as protecting threatened and endangered species like the estuarine crocodile, Indian python and Bengal tiger. Notably, it’s the only area known to have tigers that are ecologically adapted to mangrove habitats.

The forest shows almost no tree cover loss from 2001 to 2012. While pollution, overexploitation, aquaculture and agriculture all pose threats to this ecosystem, conservation efforts have largely minimized forest loss in the 21st century.

Mangrove forests off the eastern coast of Kalimantan in Indonesia have not been as fortunate as the Sundarbans. Many mangrove ecosystems are dotted with tree cover loss in this region.

Tree cover loss in Kalimantan's mangroves from 2001-2012. Click to enlarge.

Conservation efforts for mangrove forests on this island are minimal, and only a few mangrove areas are incorporated within legally protected areas. Consequently, wide areas of coastal plains are left vulnerable to human pressures such as oil palm development. Oil palm plantations are recognizable by the distinct crown of the palm tree canopy—when using GFW to zoom in on Kalimantan’s mangroves, these plantations are clearly visible. 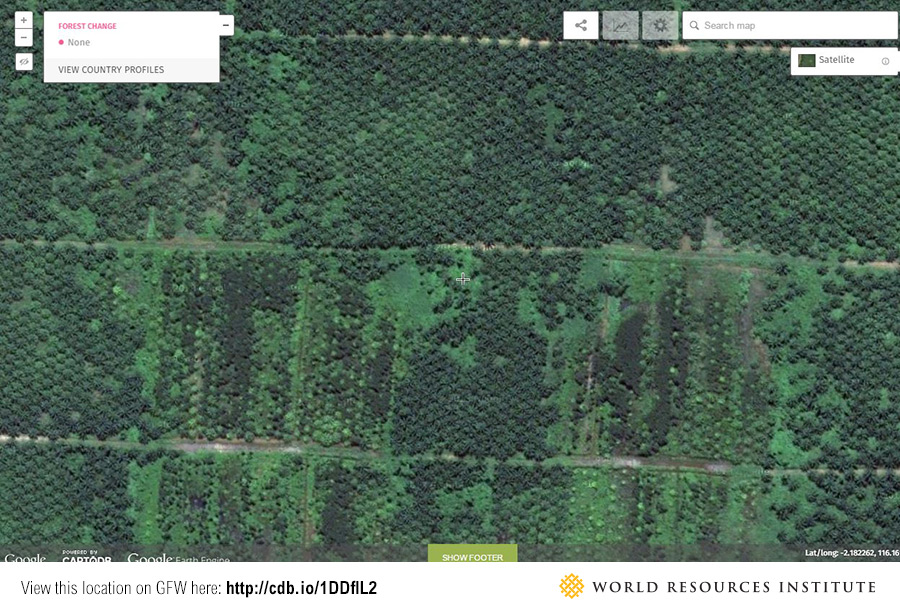 While mangrove loss rates may not be as high as the rate of tropical deforestation, the conservation battle continues. GFW data indicate that the world lost between 9,000 and 25,000 hectares (22,000-62,000 acres) of mangroves each year between 2001 and 2012, and that’s not considering the enormous damage done prior to 2001. As countries race to protect their forests, they must also protect the vital mangrove ecosystems along their coastlines. With continued data analysis, conservation, management and restoration, we can halt the loss of the world’s remaining mangrove forests and begin to reverse it.