Improving food security and resilience in Africa is a matter of political will: the solutions are known but must be implemented. To succeed, all sectors need to work together to scale up climate-smart agriculture. That was one major conclusion that emerged from the U.S.- Africa Leaders Summit. Beyond political will, there is a full menu of interventions that boost production in ways that are climate smart and also manage demand for food.

Sub-Saharan Africa has the world’s lowest cereal crop yields, averaging less than 0.9 ton per acre (2 tonnes per hectare) or roughly half the world average (See Figure 1), according to WRI’s research report on Improving Land and Water Management. Solving agricultural development challenges in Africa is fundamental to improving food security while addressing climate change. More than 200 million people—27 percent of the population in Sub-Saharan Africa—are chronically undernourished, and 40 percent of children under the age of five are stunted by malnutrition. 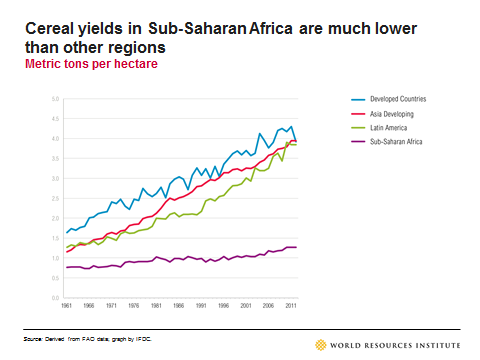 The region already depends on imports for 17 percent of animal products and one-quarter of the cereals and two-thirds of vegetable oil. That dependence is expected to rise if the population doubles to 2.1 billion by 2050, as has been forecast.

To feed a growing population, crop yields must increase significantly, but current efforts to spur production are hampered by climate change. As noted by several speakers at the U.S.-Africa Summit, rising temperatures and erratic rainfall are reducing yields now and hobbling the sustained production of coffee, tea and other commercial crops. And the projected impacts of climate change on crop yields are particularly negative in Africa. 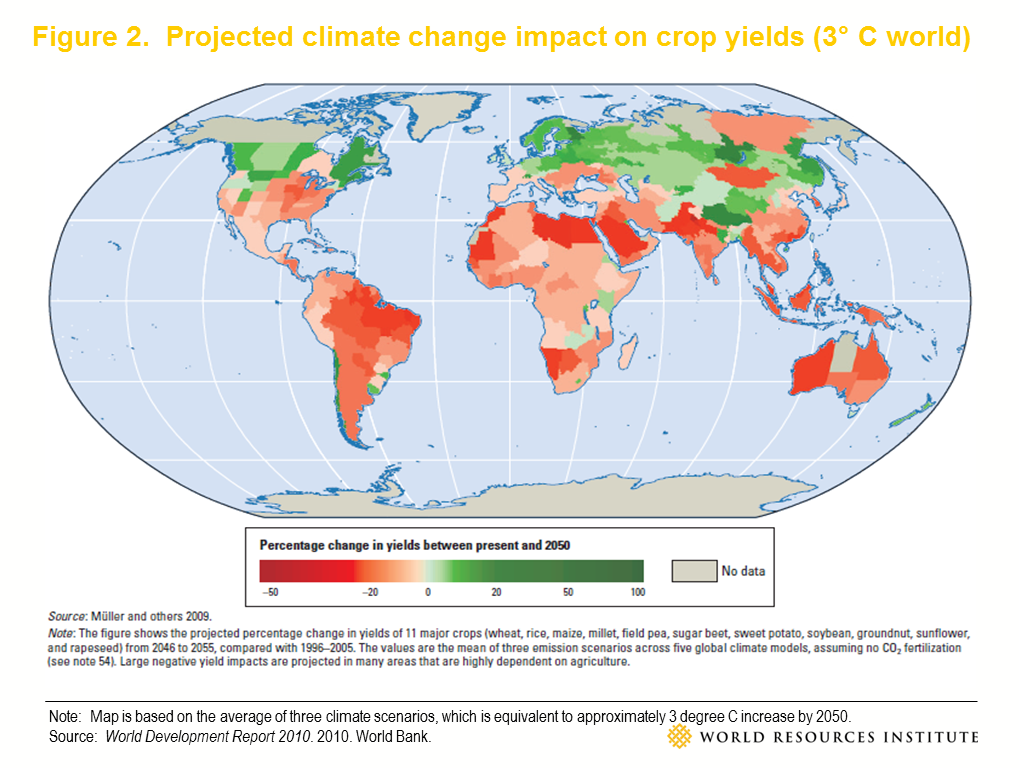 So far, many efforts to grow more food in Africa have focused on the increased use of mineral fertilizers, improved seed and strengthening targeted agricultural value chains. This is reasonable, since Sub-Saharan Africa uses much less fertilizer than any other region—less than 8.9 pounds per acre or 10 kilogram per hectare—compared to a world average of 107 pounds per acre or 120 kilogram per hectare. While ongoing programs supporting agricultural development in Africa are laudable, they have not yet sufficiently addressed several fundamental causes of reduced resilience to climate change and increasing food insecurity. These include widespread degradation of cropland and loss of forest cover, affecting 235 million acres (95 million hectares) or 75 percent of the arable land in Sub-Saharan Africa which has been hit by soil erosion, nutrient depletion and deforestation. It makes no economic sense for farmers to apply expensive fertilizers on soil that is too degraded to allow the fertilizers to do their job. And farmers who aren't sure of their rights to the land and its resources may be reluctant to invest in longer term actions needed to restore soil fertility.

Each year some 14.8 million acres (6 million hectares) of farm land in the region become so degraded from unsustainable agricultural practices that they are abandoned, pushing some farmers to clear more forest for cultivation. Globally, agriculture accounts for 24 percent of greenhouse gas (GHG) emissions, including 11 percent from deforestation and land use change. The world can ill afford to continue “business as usual” agricultural development. And it would be unwise and unnecessary to keep expanding the area of cropland by cutting down carbon-rich forests that support millions of people.

Innovative farmers have demonstrated what can be done at scale to sustainably increase food production without contributing to deforestation. Restoring agroforestry parklands, increasing the density of nitrogen-fixing trees on farms, investing in rainwater harvesting, adopting conservation agriculture and integrated soil fertility management practices are among a suite of improved land and water management practices that can be used to reclaim degraded land, restore cropland productivity and improve food security. These improved practices are at the core of climate smart agriculture, replenishing soil nutrients and organic matter, reducing soil erosion, increasing water infiltration and making nutrient uptake by crops more efficient. Diversifying the sources of farm income by incorporating perennial tree crops such as baobab or shea nut can make Africa’s country people less vulnerable.

Climate smart agriculture aims for a “triple win” that increases productivity and resilience and reduces GHG emissions, and these practices show how it can be done. In Niger, Burkina Faso, Mali, Malawi, Zambia, Ethiopia and other countries, farmers adopt these climate smart practices for the short term economic benefits, including bigger yields as well as production of firewood, fodder, edible seeds, leaves and other non-timber forest products and preservation of water resources.

WRI has identified an ambitious yet feasible menu of interventions that can help to create a sustainable food future in Africa and elsewhere. One-quarter of Africa’s projected food gap can be addressed by supporting a drive to achieve replacement level fertility by 2050. Better food security could be achieved by reducing food loss and waste.

The United States already supports these efforts, and will formally join the Global Alliance for Climate Smart Agriculture. And in June, the African Union adopted the Malabo Declaration, committing African leaders to increase African farmers’ resilience to climate change by 30 percent. Now it’s time for the U.S. and African leaders to turn their political will into action.