On November 15th, Governors of nine Midwestern U.S. states and the Premier of Manitoba signed the Midwestern Greenhouse Gas Reduction Accord, a new agreement to establish regional goals and initiatives to increase energy security, promote renewable energy, and reduce greenhouse gas (GHG) emissions. Using WRI's CAIT, I undertook a quick analysis of how the GHGs of certain Midwest Accord states compare to other regional initiatives.

Focusing on Cap and Trade

Among the provisions in the new Accord is the development of a regional multi-sector cap-and-trade system. A cap-and-trade mechanism sets limits on the total amount of GHGs that can be emitted by certain sources and permits those entities under "the cap" to trade pollution credits (called "allowances") with each other. Trading emissions in a well-designed market system creates incentives for entities to arrive at a least-cost solution for reducing their emissions.

Two other existing regional initiatives also employ a cap-and-trade system: the Regional Greenhouse Gas Initiative (RGGI) and the Western Climate Initiative (WCI), which as of yesterday includes Montana. In addition, a cap-and-trade system forms the cornerstone of several climate bills currently under consideration by the United States Congress. However, the consortium of Midwestern states that are fully participating in the multi-sector cap-and-trade component of the Accord—Illinois, Iowa, Kansas, Michigan, Minnesota, and Wisconsin (Indiana, Ohio, and South Dakota are observers)—is notable, as the total GHG emissions of this group of states is the largest of the three regional cap-and-trade initiatives, accounting for 14 percent of total U.S. GHG emissions. 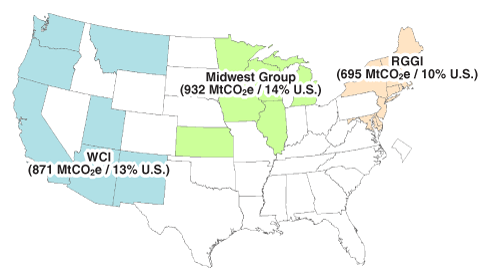 Notes: GHG emission totals from Canadian Provinces participating in the Midwest Accord and WCI are not included here. MtCO2e is million tonnes (metric tons) of carbon dioxide equivalent. Percentages are of total U.S. emissions.

From a GHG perspective, the six-state Midwestern cap-and-trade group is significant for other reasons as well:

With the establishment of this regional initiative, nearly 50 percent of the U.S. population now lives in states that are members of cap-and-trade-based initiatives.

But establishing a cap-and-trade system is not a "silver bullet" for addressing climate change. The Midwestern states are also pursuing other strategies to accelerate the deployment of carbon capture and storage, renewable electricity, biofuels, and energy efficiency.

A great deal of work in assessing the design and impacts of various climate and energy policies at the state level is already being done in concurrent stakeholder processes in Illinois, Iowa, Minnesota, and Wisconsin (WRI has been/is involved with the Illinois and Wisconsin processes). However, regional cooperation will bring the development of some climate change mitigation strategies to scale in a more timely and economical way.

In Charting the Midwest, a recent WRI report, my colleague John Larsen and I assess the GHG emission profiles of eight Midwestern states (seven of which signed the Accord). Among other findings, we demonstrate (using emissions data) that, as a region, the Midwest is highly dependent on coal for its generation of electricity, produces a relatively large amount of GHG emissions from agriculture, and has a diverse, but GHG-intensive industrial sector. Regional emissions per capita are consequently 50-70 percent higher than their coastal counterparts.

These regional characteristics create both challenges and opportunities for the Midwest. It is clear that if the U.S. is to become less reliant on foreign fossil fuels, reduce its GHG emissions, and simultaneously create economic growth, the Midwest will play a critical role.