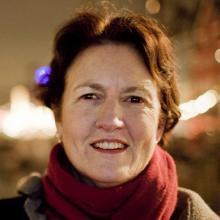 Under Ms. Beinecke’s leadership, NRDC has focused on finding solutions to some of the biggest environmental challenges of our time, including establishing a clean energy future that curbs climate change, reviving the world's oceans, defending endangered wildlife and wild places, protecting our health by preventing pollution, fostering sustainable communities, and ensuring safe and sufficient water.

Prior to becoming the president in 2006, Ms. Beinecke served as the organization’s executive director for eight years.

In 2010, Ms. Beinecke was appointed by President Obama to the National Commission on the BP Deepwater Horizon Oil Spill and Offshore Drilling. She is a member the Secretary of Energy’s Advisory Board (SEAB); she serves on the Advisory Board of the MIT Energy Initiative, National Academies of Science and the board of World Resources Institute (WRI).