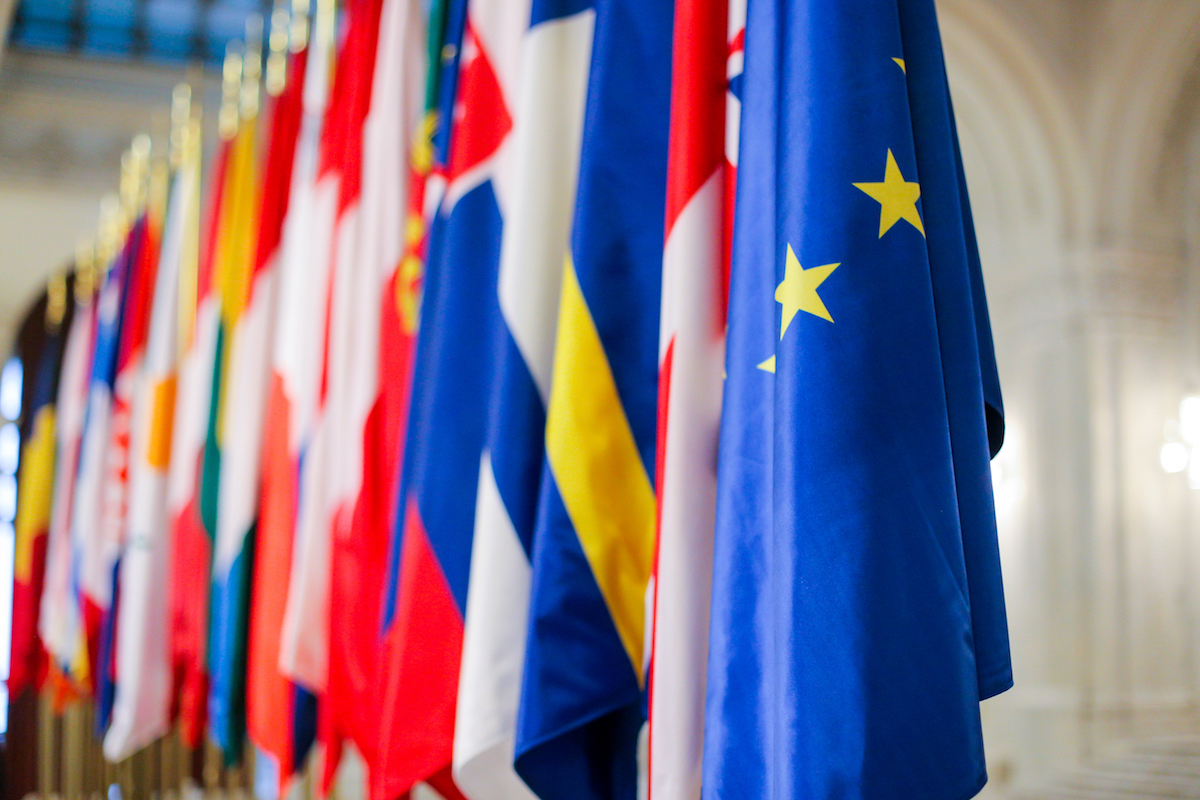 The European Union’s (EU) Just Transition Mechanism is a framework to support national just transition efforts, providing dedicated financial resources and technical assistance to EU member states with the requirement that recipients develop national just transition plans. It includes a 17.5 billion euros ($17.8 billion) Just Transition Fund, along with 13.3 billion euros ($13.5 billion) in grants and loans through other channels to support just transition programs and investments, in addition to co-financing and matching requirements for countries.

The European Union is committed to achieving net-zero GHG emissions by 2050 and has integrated the target throughout the European Green Deal adopted in 2020. The EU regions most at risk of socio-economic disruption from this emissions reduction process are those that rely on fossil fuel extraction and production, especially coal. As of 2018, there were 207 coal-fired power plants in 103 regions across 21 EU countries, accounting for 15% of Europe’s power generation capacity, and 128 active coal mines in 41 regions across 12 EU countries. As of 2018, the coal sector directly employed about 237,000 people, including 185,000 in coal mining. It also indirectly supported 215,000 jobs. Two-thirds of coal power plants in the EU are expected to retire by 2030, leading to the loss of about 33,000 direct jobs between 2020 and 2030. This will accelerate the closure of European coal mines, which had already been shutting down due to lack of competitiveness. By 2030, cumulative job losses in coal power and coal mining are expected to reach 160,000 direct jobs.

On a national level, Poland faces the greatest potential job losses, followed by Germany, Romania, Bulgaria and Spain. On a more local level, the largest job losses are predicted to be in Silesia, Poland -- 40,000 jobs, equivalent to half of the total employment in the region. Three other local regions in the Czech Republic, Romania and Bulgaria could each lose more than 10,000 jobs — about a third of total employment in each region.

The EU has designed a Just Transition Mechanism to support the countries and regions that face the greatest challenges to phasing out high-emissions activities. The Just Transition Mechanism is rooted in concepts of social justice and trans-national collaboration that have informed European policymaking for decades. After World War II, the European Coal and Steel Coalition was formed to regulate industrial production, and included a fund for the training and redeployment of workers. The Just Transition Mechanism also builds on the Energy Union, established in 2015, and the Initiative for Coal Regions in Transition, established in 2017. Through the Initiative for Coal Regions in Transition, the European Commission connects stakeholders to promote good practices and cooperation, provides technical assistance to coal intensive regions and offers resources like toolkits and guidelines. A separate just transition fund was tabled by the European Parliament in 2016.

In January 2020, the European Commission proposed the Just Transition Mechanism to help regions that are most reliant on fossil fuels cope with the economic and social impacts of the transition to a sustainable economy. The Just Transition Mechanism is part of the Sustainable Europe Investment Plan, which is the finance component of the European Green Deal. All EU countries are eligible for funding, but resources will be concentrated in regions facing the biggest challenges, focusing on those that need to phase out production and use of coal, lignite, peat and oil shale, or transform carbon-intensive industries. Allocations are determined by a negotiation process among member states. The Just Transition Mechanism consists of three pillars:

Countries will have to match every euro from the EU budget with 1.5–3 euros of their resources that come from the European Regional Development Fund (ERDF) and the European Social Fund Plus (ESF+); national co-financing is also expected. The highest allocations under Pillar 1 will go to Poland, Germany, Romania and Czech Republic, which largely aligns with the locations of anticipated job losses. 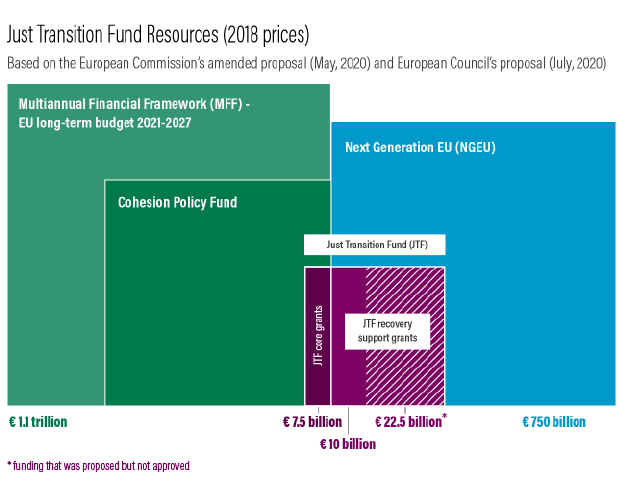 All investments under the Just Transition Mechanism are made based on national Territorial Just Transition Plans. EU countries need to develop these plans in alignment with their national energy and climate plans and the EU climate neutrality goal, and to submit them to the Commission for approval within the coordination framework for the EU economic and monetary governance. The European Commission prepared a detailed template for these plans and provides support for their formulation.

The Commission also launched a Just Transition Platform in June 2020, which built on the Initiative for Coal Regions in Transition to serve as a centralized hub for EU countries and regions to access support and information related to the just transition, including funding opportunities, technical and advisory support, relevant regulatory updates and sector-specific initiatives.