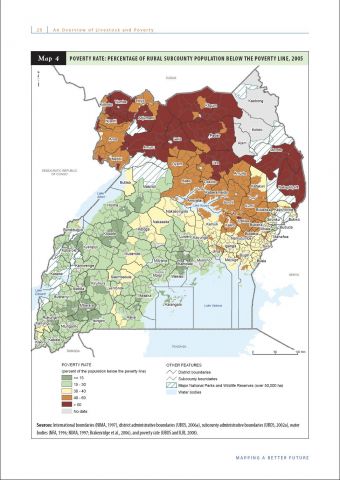 Geography can play a role in determining relative levels of household well-being, as can be seen in Uganda’s latest poverty maps (for 2005). Subcounties with high poverty levels tend to be clustered, as are the wealthier subcounties. The highest incidences of poverty—greater than 60 percent of the population living below Uganda’s official rural poverty line—are seen across the north of the country. Still high, at 40–60 percent, are the districts of Nyadri, Arua, and Nebbi in the northwest, with another dozen districts stretching across to eastern Uganda, where most of the districts fall in the 30–40 percent poverty range. Low poverty levels (less than 15 percent) are found in pockets of western and southern Uganda, and around Kampala. The reasons for this spatial pattern are complex, and include factors such as rainfall and soil quality (which determine agricultural potential), land and labor availability, degree of economic diversification, level of market access, and issues of security and instability.