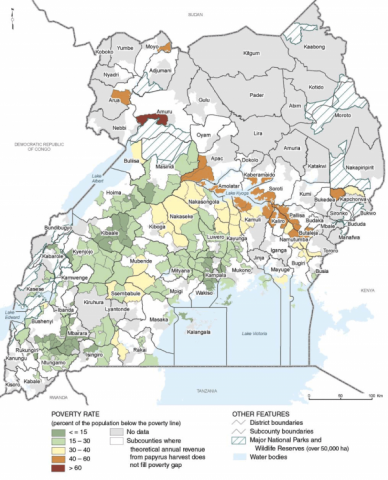 Of the 514 subcounties with papyrus wetlands, 210 could harvest and sell enough raw papyrus to theoretically close the poverty gap within their administrative unit. This map highlights these 210 subcounties and shows their corresponding rural poverty rates. The great majority of them represent better-off subcounties with poverty rates of 15-30 percent. Only a few, in the proximity of Lake Kyoga, are an exception to this pattern and have higher poverty levels of 40-60 percent.

For 304 subcounties, sales of raw papyrus are insufficient to close the poverty gap and are shown as white areas on the map. These subcounties either need to increase papyrus returns by adding value to the raw material (for example, developing and selling papyrus mats, crafts, or briquettes) or obtain other wetland revenues. Almost twice as many subcounties would be able to close their poverty gap, for example, if they produced mats that sell at 3,500 Uganda

Shillings a piece (calculation based on Karanja et al., 2001). The poverty reducing effects of wetlands could be even greater if communities could capture higher revenues from other marketable wetland products or from new markets that provide payment for ecosystem services.