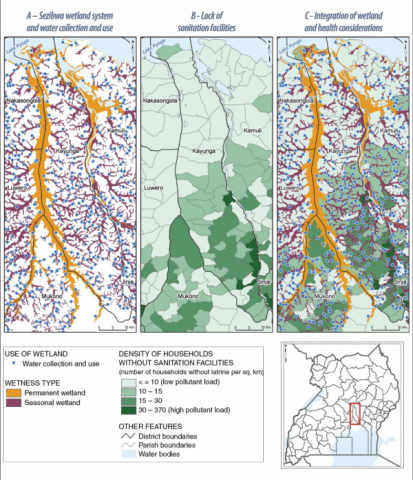 The Sezibwa wetland system is one of the four proposed sites to monitor long-term ecological and socioeconomic trends in Uganda’s wetlands. Map A shows the location and extent of this system. It is located south of Lake Kyoga and composed of two permanent wetlands (shown in orange) following the Victoria Nile River and the Sezibwa River and a multitude of smaller seasonal wetlands (shown in purple), the latter representing two-thirds of the total area of the system. The map also displays where people collect or use water from their wetland (based on data from the National Wetlands Information System). Similar to the national picture, both seasonal and permanent wetlands are used for water provision but that source of water is defined as unsafe (MWE, 2007).

Map B shows the density of households without sanitation facilities (based on data from the 2002 Uganda Population and Housing Census) for each parish neighboring this wetland system. This density indicator can be interpreted as a proxy to delineate source areas of higher potential pollutant loads (bacteria, pathogens, etc.). The upper reaches of the Sezibwa system following the boundaries of Kayunga, Jinja, and Mukono Districts have the highest density of households without sanitation facilities (shades of dark green).

Map C combines Map A and Map B. This simple overlay provides the following insights:

It is important to point out that wetland management alone cannot substitute for investing in adequate sanitation facilities, safe sources of drinking water, and efforts to promote better hygiene behavior. However, closer collaboration between wetland management and environmental health interventions could help mitigate the risk of vulnerable communities: