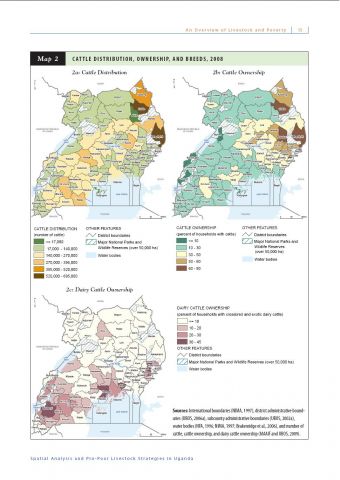 The 11.4 million head of cattle counted in Uganda’s 2008 national livestock census are not evenly distributed across the districts. Kotido, Nakapiripirit, and Kaabong are the districts with the highest cattle numbers followed by Kiboga, Moroto, Kiruhura, Rakai, and Soroti Districts. Another 21 districts, shown in light tan on this map have cattle numbers between 140,000 and 270,000, slightly above Uganda’s district average. Many of these districts are in Uganda’s ‘cattle corridor,’ an area stretching from northeast (e.g., Kotido District), through central (e.g., Nakasongola District) to southwest Uganda (e.g., Rakai and Ntungamo Districts).