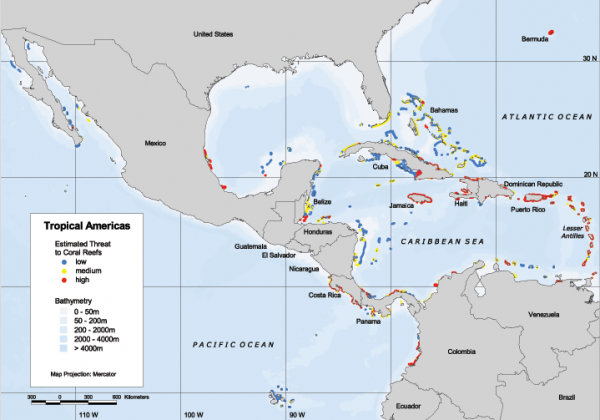 About 9 percent of the world's mapped reefs are found in this region, most of which are located along the Central American coast and off the Caribbean islands.

Our results indicate that almost two-thirds of reefs here are at risk (about one-third at high risk). Sedimentation from upland deforestation, poor agricultural practices, coastal development, pollution, and overfishing are major threats to many reefs here.[1][2]

Most reefs of the Antilles and Lesser Antilles (including Haiti, the Dominican Republic, Puerto Rico, Dominica, and Barbados) are under high potential threat.

Virtually all of the reefs of the Lesser Antilles are at risk.

Almost all reefs of the Florida Keys are at moderate threat, largely from coastal development, inappropriate agricultural practices, overfishing of target species such as conch and lobster, and pollution associated with development and farming.

Those of the Bahamas and the Yucatan Peninsula and the remoter reefs off Belize, Honduras, and Nicaragua are largely at low risk from mapped human activity.