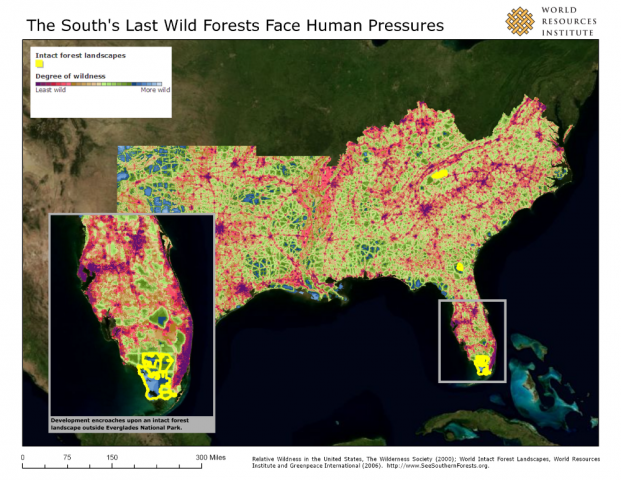 As a result of rapid development over the last 40 years, the vast majority of land in the southern U.S. has been in some way impacted by human activity. Today, only a small amount of land remains in a relatively natural, or “wild”, state.

To visualize this impact, the Wilderness Society produced a map that reflects the relative “wildness” of the region. This map, hosted on www.SeeSouthernForests.org, shows that most of the southern U.S. is composed primarily of “non-wild” metropolitan centers and surrounding suburban areas (shown in red and purple), with only a few large sections of “wild” land remaining (shown in blue).

Contained within a few of these “wild” areas are sections of forest that have remained mostly untouched by human activity and have maintained most of their native biodiversity. These sections (shown in yellow) are called intact forest landscapes, and they represent remnants of forests at their most advanced stage of development, having spent hundreds of thousands of years adapting to pests, natural disasters, and other hazards. However, of all the woodlands in the southern U.S., only three remain: portions of the Great Smoky Mountains National Park; the Okefenokee Swamp; and the forests of southwestern Florida, comprised of Big Cypress National Preserve and portions of Everglades National Park.