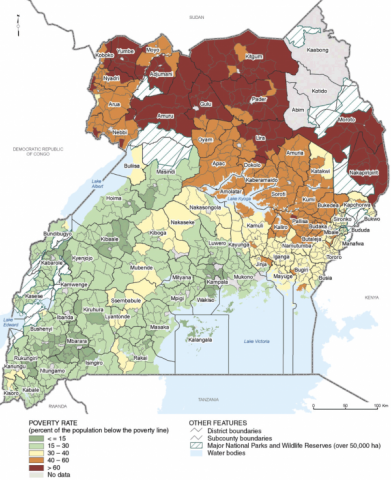 This map displays the 2005 poverty rates for rural subcounties. Other poverty measures such as the poverty density (number of poor per square kilometer), poverty gap, and poverty severity are also available for these subcounties, as are estimates of inequality related to household expenditures.

Rural poverty rates in Uganda’s subcounties range from less than 15 percent to more than 60 percent of the population, with brown areas indicating higher and green areas representing lower poverty levels. Map 1 shows a high geographic concentration of poverty in northern districts (e.g., Gulu, Amuru, Kitgum, Pader, Moroto, and Nakapiripirit Districts) and low poverty in the southwest and central part of the country (e.g., in parts of Mbarara, Bushenyi, Isingiro, Kibaale, and Wakiso Districts). The reasons for this spatial pattern are complex, and include factors such as rainfall and soil quality (which determine agricultural potential), land and labor availability, degree of economic diversifi cation, level of market integration, and issues of security and instability (the latter is especially relevant for the northern parts of Uganda).

Poor people, especially in rural areas, generally rely on ecosystem services directly for subsistence and income-generating activities or to obtain water and medicines because of lack of affordable alternatives. Wetlands are also an important source of cash income, especially in emergencies. One of the few studies about the relationship between poverty and wetlands in Uganda showed, for example, that an overwhelming majority of papyrus harvesters in the Lake Bunyonyi wetlands sold raw papyrus or crafts made from papyrus to bridge income shortfalls for periodic high expenses such as school fees or end-of-the-year festivities (Maclean et al., 2003).

High dependence on ecosystem services combined with few assets and capabilities make poor people particularly vulnerable to ecosystem degradation (MA, 2005). Consequently, the condition of wetlands and the way they are managed can have a disproportionate impact on the well-being of poor families (Maclean et al., 2003).