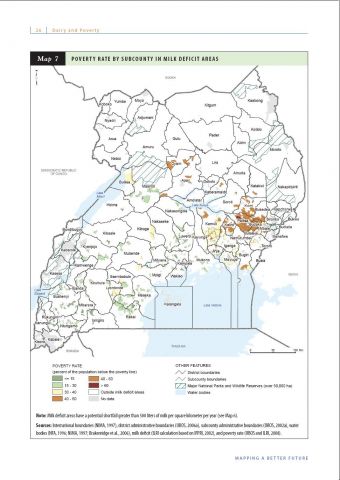 A milk surplus and deficit map can be compared with maps showing poverty rates and poverty densities in order to plan more pro-poor dairy interventions. Such overlays can, for example, pinpoint locations with multiple deprivations (e.g., high levels of poverty and a shortfall of milk) or with greater potential to reach a higher number of poor in an investment area.

Focusing on milk deficit areas (with shortfalls greater than 500 liters of milk per square kilometer per year) and overlaying them with poverty rates shows the following patterns: