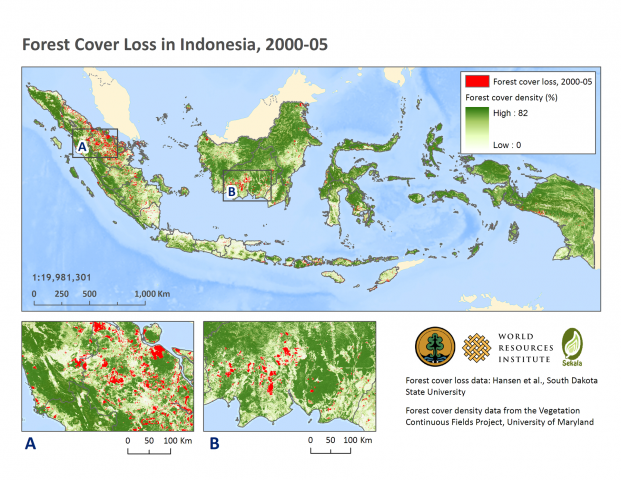 Up to 84% of Indonesia's national greenhouse gas emissions arise from land use change and deforestation. This map shows the extent and location of forest cover loss in Indonesia---detected by satellite---for 2000 to 2005, when deforestation averaged 0.71 million hectares per year and Indonesia was the second-most deforesting country, following Brazil. Globally, Indonesia accounts for approximately 27 percent of GHG emissions from land use change and forestry.

Norway and Indonesia recently signed a letter of intent (LOI) worth $1 billion to reduce greenhouse gas emissions caused by loss of Indonesia's forests. Through the LOI, Indonesia has agreed to a two-year moratorium on the conversion of natural forests and peatlands to other uses, such as palm oil plantations. In addition, Indonesia has pledged to move agricultural development from forests to already degraded lands. Through this agreement, Indonesia has pledged to reduce total national emissions by 26% relative to business as usual levels by 2020. With assistance from international partners emission reductions could reach 41%.