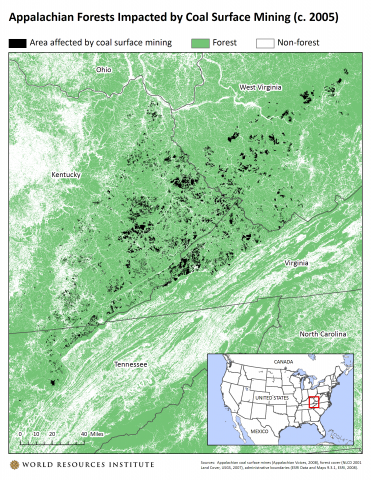 Though the practice of mountaintop removal mining (MTR) is perhaps best-known in West Virginia, it is one of the main drivers of forest change in the entire region of central Appalachia - along the Cumberland and Alleghany Plateaus in eastern Kentucky, southern West Virginia, southwest Virginia and eastern Tennessee. This map, produced with data from Appalachian Voices, shows the area affected by mountaintop mining within the Southern United States.

Mountaintop removal mining often leads to long-term loss of forests since woody vegetation is slow to establish on mined areas. Ecosystem services provided by forests, such as water purification and carbon sequestration, may be seriously impaired. Reclaimed areas rarely support biodiversity at pre-mining levels. Mining activity is concentrated within some of the most productive and biodiversity-rich regions of the South, causing great concern over the permitting and operation of these mines.

An interactive version of this map is available at the Southern Forests for the Future website (Select “Show Additional Map Data”).