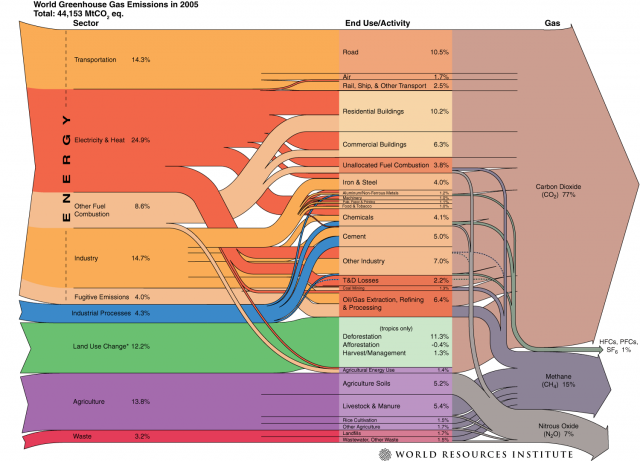 This chart is a comprehensive view of global, anthropogenic greenhouse gas (GHG) emissions. The chart is an updated version of the original chart, which appeared in Navigating the Numbers: Greenhouse Gas Data and International Climate Policy.

One of the greatest challenges relating to global warming is that greenhouse gases result—directly or indirectly—from almost every major human industry and activity. This chart shows these industries and activities, and the type and volume of greenhouse gases that result from them. It includes emissions estimates from a range of international data providers, in an attempt to account for all significant GHG emissions sources.

In 2005, total GHGs are estimated at 44,153 MtCO2 equivalent (million metric tons). CO2 equivalents are based on 100-year global warming potential (GWP) estimates produced by the IPCC. 2005 is the most recent year for which comprehensive emissions data are available for every major gas and sector.

If you are familiar with the original version of this chart, you may be interested to know what has changed in the update, and why. Total global emissions grew 12.7% between 2000 and 2005, an average of 2.4% a year. However, individual sectors grew at rates between 40% and near zero, and there are substantial differences in sectoral growth rates between developed and developing countries.

The other major difference in this version of the chart concerns the Land Use Change sector, which comprised 18.2% of GHG emissions in the previous version of the chart, and only 12.2% of emissions in this version. The apparent decrease is entirely due to revised methodologies used to calculate deforestation in the underlying FRA data, and not to any actual decrease in deforestation rates. Read the working paper for this chart for more information.