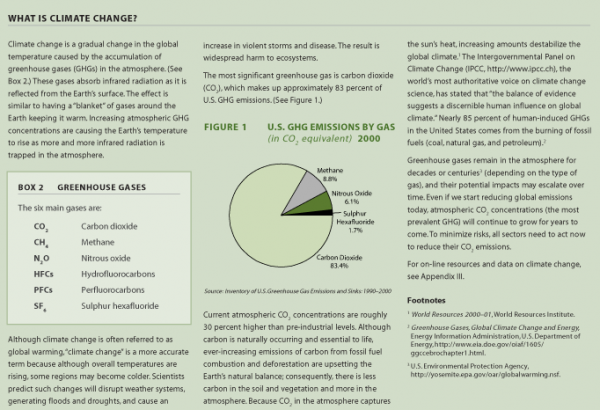 Climate change is a gradual change in the global temperature caused by the accumulation of greenhouse gases (GHGs) in the atmosphere. These gases absorb infrared radiation as it is reflected from the Earth’s surface. The effect is similar to having a "blanket" of gases around the Earth keeping it warm. Increasing atmospheric GHG concentrations are causing the Earth’s temperature to rise as more and more infrared radiation is trapped in the atmosphere.

Although climate change is often referred to as global warming, "climate change" is a more accurate term because although overall temperatures are rising, some regions may become colder. Scientists predict such changes will disrupt weather systems, generating floods and droughts, and cause an increase in violent storms and disease. The result is widespread harm to ecosystems.