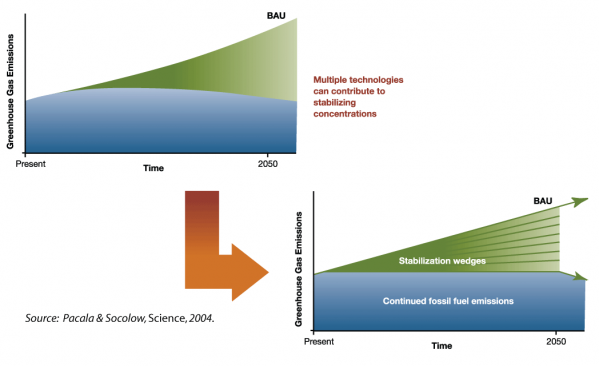 A 2004 paper by two Princeton researchers, Stephen Pacala and Robert Socolow, demonstrated graphically how a suite of existing technological options could be used to reduce GHG levels to a level that is sufficient to avoid the dangerous effects of climate change. The paper illustrates this point by breaking the required emission reductions down into manageable (though still large) “wedges,” each provided by a different technology or set of technologies

The concept is based on the comparison of a business as usual (BAU) projection of GHG emissions into the future with the desired trajectory of stable global emissions through the year 2050. The triangle-shaped gap between the two lines can be divided into smaller portions, each of which represents a technology option. The paper presented 15 such options, each with the potential to reduce emissions in 2050 by one gigaton of carbon per year and argued that implementing only 7 of these would be sufficient to avoid the worst effects of climate change.

This visual illustration conveys a simple, powerful idea: that, despite the scale of the problem, we have the potential to solve it if we can deploy today’s technologies at sufficient scale. The concept’s resonance is such that now barely a discussion of climate technology fails to mention the wedge concept. It is "the iPod of climate policy analysis... an understandable, attractive package that people can fill with their own content."