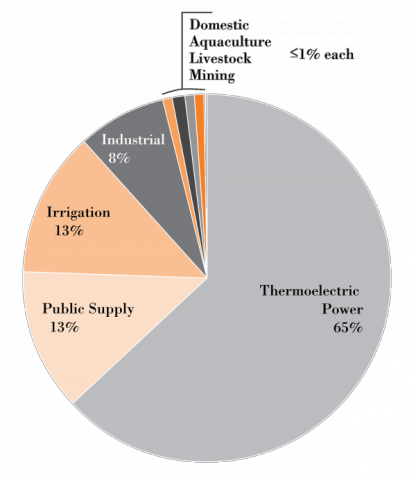 Nearly 40 billion gallons are withdrawn each day from Southeast freshwater supplies for thermoelectric power plants--about 65 percent of all withdrawals. To put this in perspective, this is nearly equal to the total daily freshwater withdrawals for public supply across the entire United States.

This water is needed for cooling purposes at power plants that use coal, oil, gas, nuclear, or biomass fuels to generate heat and produce electricity. Depending on the cooling methods, a portion of this water is consumed (lost to the atmosphere through evaporation). Over the course of a year, thermoelectric power plants in the Southeast consume nearly 140 billion gallons as a result of evaporation losses—equal to the annual water use of more than 1 million homes.

Source: U.S. Geological Survey's "Estimated Use of Water in the United States in 2000."

Southeast Freshwater Withdrawals, By Use Category, 2000

Southeast Electricity Generation by Source, 1997 and 2006