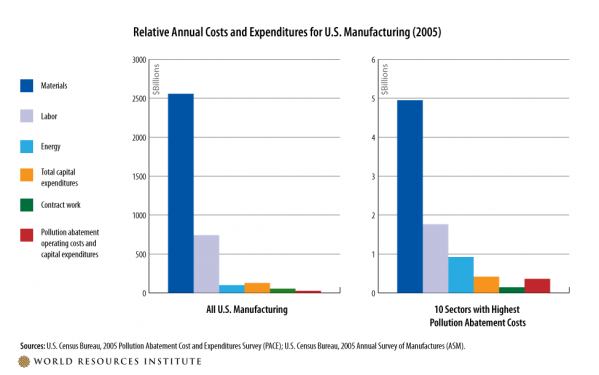 According to results from the most recent U.S. Census Bureau’s 2005 Pollution Abatement Costs and Expenditures (PACE) Survey, for the average U.S. manufacturing facility, total environmental costs amount to less than half of one percent of the total value of product shipments. Compare this with total costs of materials, labor and energy, each of which represent roughly 54%, 16% and 2% of the average manufacturer’s total value of product shipments, respectively.

Even for the 10 industries with the highest total pollution abatement costs, the total cost of all such regulations averages roughly 3% of the sector’s value of product shipments, which is not insignificant but also still well below the average cost of labor (16%), energy (9%), and other major annual costs for these sectors.

This chart directly compares the relative significance of primary annual costs and expenditures for all manufacturing (left) versus the 10 manufacturing sectors with the highest pollution abatement costs (right). Not surprisingly, the sectors that are most pollution-intensive are typically also the most energy intensive; which means they have the most to gain by maximizing their energy productivity.