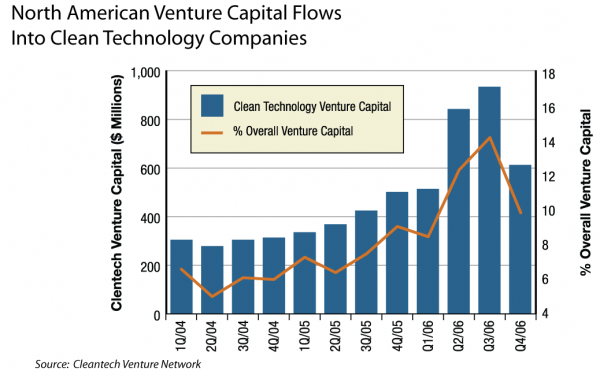 The discussion around investing in low-carbon technologies often centers on investment in technology development. This is clearly a result of recent interest in low-carbon technologies from the venture capital (VC) community. According to the Cleantech Venture Network, a group that tracks capital flows to clean technology companies, clean technology investments totaled roughly $2.9 billion for 2006, representing an 80% increase over 2005 and a 140% increase over 2004. The group also reports that in the fourth quarter of 2006 investment in the space ranked fourth in size as an industry segment, behind software, biotech and medical devices and equipment. VC interest has been driven in part by more ready exit strategies in the form of IPOs. London’s Alternative Investment Market (AIM) has witnessed over 26 clean energy IPOs or secondary offerings since late 2004.