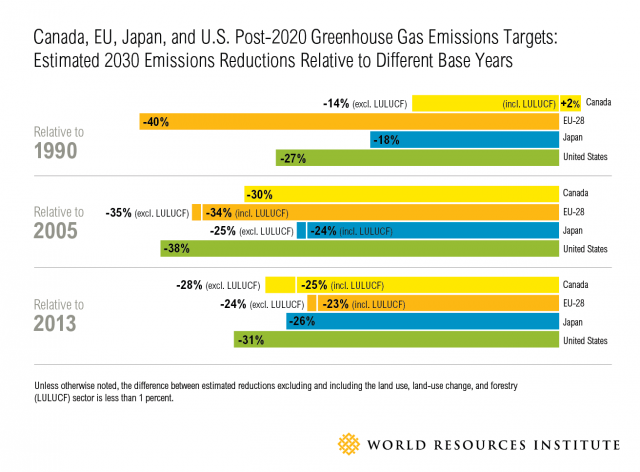 To embed in your site, copy & paste the code above.

Canada, the EU-28, and the United States have put forward greenhouse gas reduction targets in their intended nationally determined contributions (INDCs) to the United Nations Framework Convention on Climate Change, and Japan has published a draft of its proposed target. Each country uses a different base year from which to measure its reductions: the EU-28 uses 1990, Canada and the United States use 2005, and Japan uses 2013. This chart presents each target against each chosen base year to help facilitate easy comparisons.

The chart includes estimates for total 2030 emissions and base year emissions that both excludes and includes the land use, land-use change, and forestry (LULUCF) sector, as the treatment of this sector is not consistent across Canada, EU, Japan, and U.S. INDCs.

Comparison of Annual GHG Reduction Rates from 2020-2030 Based on Submitted or Reported Climate Commitments (2020 Pledges and INDCs) for Canada, EU, Japan and US