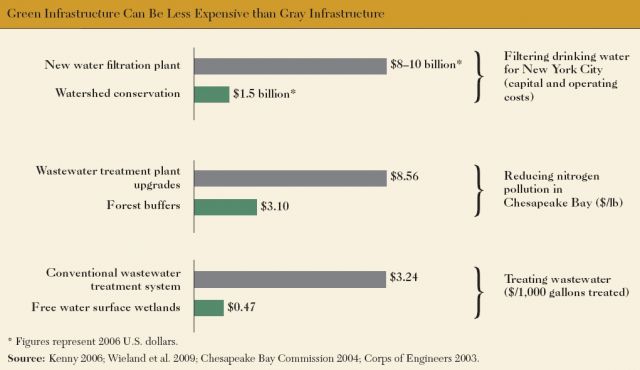 Many payments for watershed services share a common trait: they are investments in “green infrastructure” instead of “gray infrastructure.” In other words, they are investments in forests instead of human-engineered solutions, concrete, and other technologies to maintain the ongoing provision of watershed services over time. For example, to meet drinking water quality standards implemented since the late 1980s, researchers expect that treatment plants across the United States will have to invest hundreds of billions in infrastructure (Dissmeyer 2000; Maxwell 2005). Green infrastructure investments could obviate the need for at least a portion of these expenditures. New York City, Bogotá, and other cities are using investments in forest conservation and restoration as a way to avoid the building of new water filtration plants to maintain clean water flows to the cities’ residents. In the Boston area, three watersheds received a filtration waiver, avoiding costs of about $200 million due to commitments to maintain upstream forest conditions (Barten et al. 1998). In a water quality trading program, a wastewater treatment plant could finance a landowner to restore riparian forests instead of investing in plant upgrades.