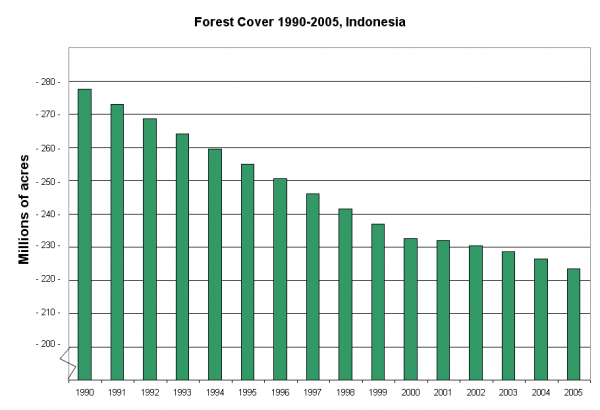 Spanning 90 million hectares, the forests of Indonesia constitute 10 percent of the world’s remaining tropical forests and provide people with a variety of benefits or ecosystem services. For instance, local communities rely on the forests for food, medicine, freshwater, and building material. The global community relies on them for carbon sequestration, timber, and tourism. In addition, the forests of Indonesia are a biodiversity “hotspot,” with new species discovered every year.

These forests, however, are under threat. Since 1990, approximately 25 percent of the country’s forests---about 28 million hectares—have been cleared. According to the Food and Agriculture Organization, the country has the second highest amount of annual forest loss of any nation, losing approximately 1.9 million hectares per year. Deforestation is having significant implications for people, biodiversity, and the climate.

Forest Cover Loss in Indonesia, 2000-2005: The Starting Point for the Norwegian Billion to Reduce Deforestation