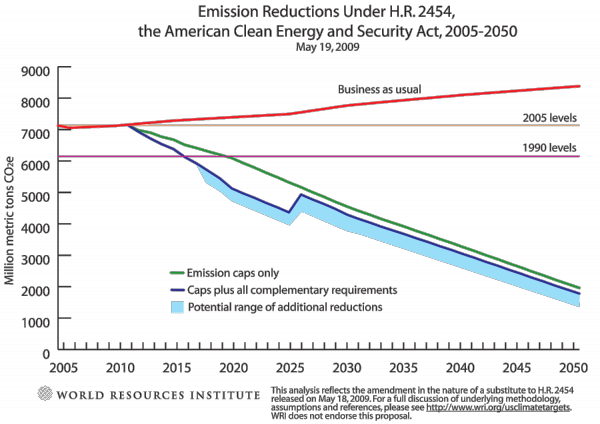 Note: an update to this chart is available. For the latest information, go to U.S. Climate Targets.

This analysis provides an assessment of reductions in greenhouse gas (GHG) emissions that could be achieved by Title III of the amendment in the nature of a substitute to H.R. 2454, the American Clean Energy and Security Act (ACESA) sponsored by Chairmen Waxman and Markey released on May 19, 2009. This assessment is an update to a previous analysis released on April 21, 2009 and reflects a significantly revised reference case recently released by the Environmental Protection Agency. To account for the effects of different components of H.R. 2454, reduction estimates are divided into three scenarios:

Comparison of Legislative Climate Change Targets in the 110th Congress: 1990-2050

Net Estimates of Emission Reductions Under Pollution Reduction Proposals in the 111th Congress, 2005-2050

Cumulative Allowance Distribution Under the Substitute to H.R.2454 In Select Timeframes