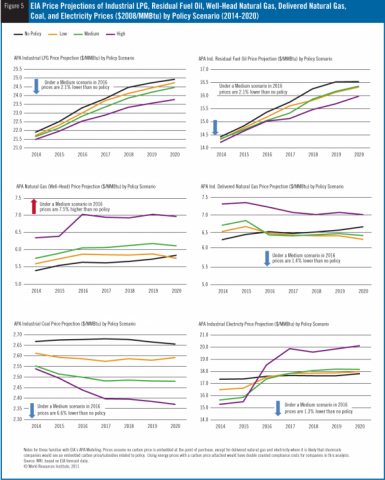 In Standard & Poor’s view, the profitability of commodity chemicals production is highly correlated to energy and raw materials prices because these costs often make up the majority of a chemical company’s production cost base, and competitive advantage is largely based on a company’s ability to maintain low costs of production.

Under each of the EIA’s scenarios, WRI notes that energy price changes due to policy vary - in some cases substantially. EIA’s modeling of cap-and-trade legislation projects higher demand for natural gas and lower demand for petroleum products and coal as the economy responds to the price on GHG emissions and shifts away from GHG-intensive fuels.

Under the three EIA scenarios, natural gas prices drive energy-related costs for the 13 subsectors. In the three scenarios, natural gas well-head prices are 4% to 25% higher relative to no policy, while coal, LPG, and residual fuel oil prices are lower relative to no policy in 2016 (2% to 8% lower, see figure). This increase/decrease is magnified depending on carbon price projections in each of the scenarios. Companies with fundamental dependencies on natural gas for feedstock and fuel, such as nitrogenous fertilizer companies, and companies that use basic chemicals derived from natural gas (such as commodity petrochemical companies) are likely to see cost increases under the EIA’s scenarios. Across the economy, companies dependent on coal and petroleum products are likely to switch (depending on the nature of products and ability to deploy capital) to natural gas to reduce compliance costs, so it is also likely that natural gas will feature more prominently in many chemicals companies’ cost structures.