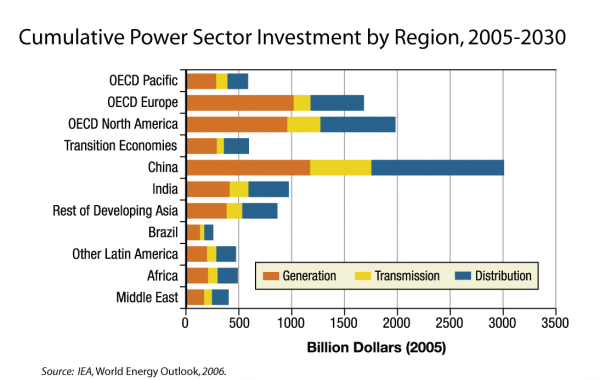 There is an international dimension of capital flows to lowcarbon technologies. Investing in key emerging economies such as Brazil, Russia, India and China, the so-called BRIC countries, requires navigating complexities specific to each country. This includes understanding the network of investment players that can support large-scale deployment of technology. For instance, utility scale project finance in China involves a different set of players than venture backed financing of a PV company based in Silicon Valley.

Understanding the distribution of financing is important because different countries draw on very different sources of capital. In China, for instance, the vast majority of capital deployed in the energy sector is domestic, and less constrained by ROI requirements than in more liberalized markets. According to the World Energy Outlook the largest investment requirements in the power sector, some $3 trillion, will occur in China by 2030.

While the majority of capital invested in BRIC countries is from domestic sources, the sovereign risk characteristics of these countries can differ significantly, which can influence the types of international lenders willing to invest in these markets. Investor risk tolerances, combined with the capacity of a country to absorb and deploy technologies, and the local policies and measures influence which technologies will influence investment capital in the BRIC countries.