Home > Maps & Data > A Continuum of Adaptation Activities: From Development to Climate Change 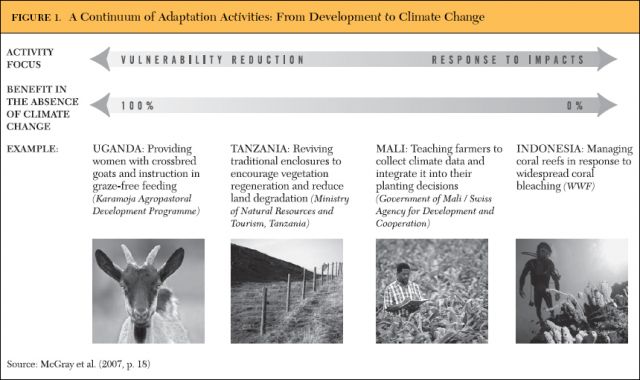 A continuum of actions can be taken to reduce the impacts felt from climate change--from ‘pure’ development activities on the one hand to very explicit adaptation measures on the other.

At one end of the continuum, the most vulnerability-oriented adaptation efforts overlap almost completely with traditional development practice, where activities take little or no account of specific impacts associated with climate change. At the opposite end, activities are designed to target distinct climate change impacts, and fall outside the realm of development as traditionally defined. In between lies a broad spectrum of activities with gradations of emphasis on vulnerability and impacts.

Failure to make investments on this “left side” would leave gaps in the landscape of adaptation efforts, especially in regions where people are acutely vulnerable. Thus, while the overarching need for ‘additional’ funding for adaptation is clear, designating these funds exclusively toward actions to address particular climate impacts would leave much-needed interventions unfunded. In other words, adaptation is not just additional to development but often is development.