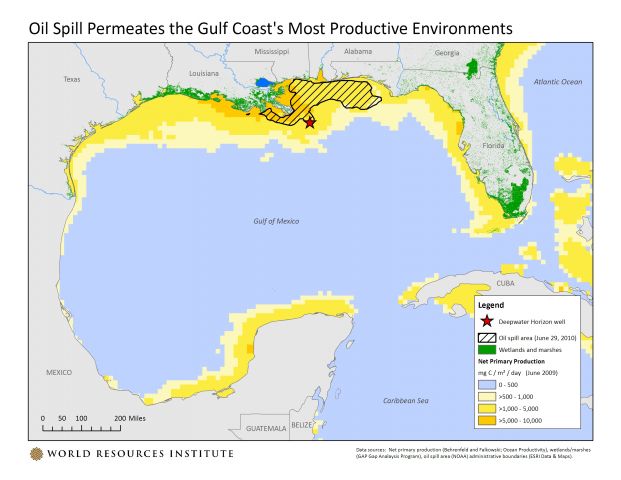 According to WRI estimates, the potential damage to marine ecosystem services as a result of the Deepwater Horizon oil spill in the Gulf of Mexico could be up to $875 million for marine ecosystems and up to $60 billion for coastal ecosystems. This map shows the ecosystems most at risk – coastal marshes and wetlands, plus productive ocean areas near-shore. Coastal ecosystems provide vital ecosystems services including shoreline protection from hurricanes, erosion protection, fisheries, and recreation. Ocean productivity is estimated by measuring the amount of solar energy captured in organic compounds by microscopic aquatic plants called phytoplankton. This process is known as primary production. This energy stored through primary production becomes the foundation for ocean food chains. Scientists estimate net primary production in the ocean using satellite imagery to measure chlorophyll, which is the pigment in plants responsible for photosynthesis. As shown in the map, the Deepwater Horizon oil spill is occurring in some of the most productive ocean areas of the Gulf of Mexico during peak production months and in close proximity to a huge swath of the Gulf Coast’s vital coastal marshes and wetlands.

Maps From Other Organizations