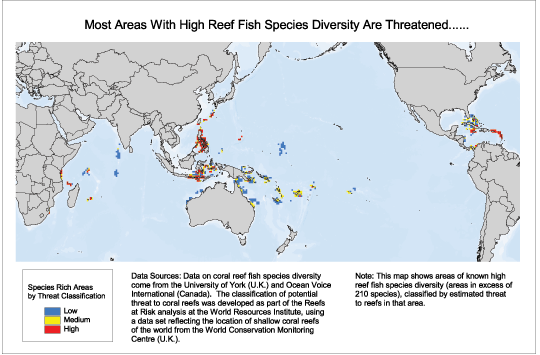 As the map "Most areas with high reef fish species diversity are threatened . . ." shows in red, most of these sites are located in Southeast Asia (almost a quarter of this region's reefs classify), especially in waters off the Philippines, Indonesia, and Japan. As a proportion of total reef area, the Caribbean emerges as another large hot spot: about 18 percent of Caribbean reefs exhibit high coral reef fish species counts, and are at high risk. This includes most of the coral communities of Jamaica, Puerto Rico, and the Lesser Antilles (Guadeloupe, Dominica, Martinique, and other islands).

It should be noted that the analysis of areas of high reef fish biodiversity is biased in favor of coral reef areas that are more intensively surveyed. For example, the analysis suggests that there are no hot spots in the Middle East, but, in fact, levels of biodiversity in parts of the Red Sea reach similar levels to the hot spots in the Caribbean. Because a greater proportion of species present in the Caribbean were sampled relative to other areas, these areas achieve relatively high species counts, warranting inclusion in this analysis. Several other areas likely to have comparable diversity that were not included are the reefs off the coast of Vietnam and the Spratly Islands.

Additional hot spot areas were identified off the Comoros, Tanzania, and Fiji.

What does this imply, in terms of priorities for immediate protection? Some scientists advocate taking a "portfolio approach" to selecting new sites for protection as parks and reserves. they say that planners and managers should protect important biodiversity sites that are threatened and sites where human pressure and human disturbance are low -- where it is easier to create and maintain parks and reserves.

About 17 percent of the world's reefs exhibit high coral reef fish species richness, and are presently classified at low risk from human activities. More than half of these low-risk, high-diversity sites (shown in dark blue on the map, above) are located in the central and western Pacific, especially within waters off Australia and Papua New Guinea. Large tracts of qualifying reefs occur off the Maldives, Chagos Archipelago, Cuba, the Bahamas, Belize, and southern Mexico.