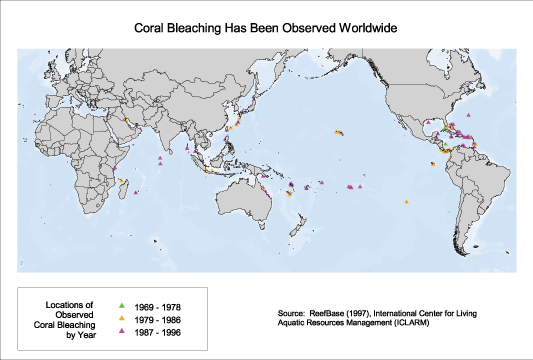 When corals undergo certain kinds of stress, much of the zooxanthellae -- the symbiotic algae that provide coral polyps with nutrients -- are expelled from the coral tissue. Ultimately, weakened corals may die. Bleaching is a frequent symptom of pollution-induced stress, as well as a response to natural factors such as changes in water temperature, salinity levels, and possibly ultraviolet light.[1]

During the El Nino of 1982-83, large areas of coral reef around the world were severely damaged by high water temperatures, which resulted in coral bleaching. Scientific studies have linked bleaching events to temporary "hot spots," local areas of unusually high temperatures caused by changes in atmospheric circulation during the El Nino oceanographic events. This map provides sense of the wide incidence of coral reef bleaching. The effects of the severe El Nino that started in 1997 have yet to be documented.[2][3]