Undermining Rights: Indigenous Lands and Mining in the Amazon 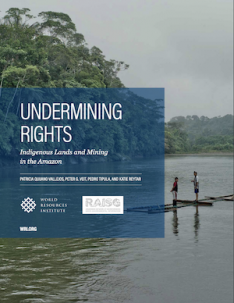 This Report is part of Environmental Rights within our Center for Equitable Development, Forest Program, and Indigenous Peoples and Local Communities (IPLCs). Reach out to Peter Veit for more information.

This Report is part of Environmental Rights within our Center for Equitable Development, Forest Program, and Indigenous Peoples and Local Communities (IPLCs). Reach out to Peter Veit for more information.

With gold prices skyrocketing and demand for other minerals on the rise, mining poses a growing threat to communities and ecosystems around the world. Conducting geospatial analysis of the Amazon biogeographic region, this report estimates, for the first time, the full extent of legal, large-scale mining concessions and illegal mining operations on Indigenous territories within the rainforest. It finds that, together, legal and illegal mining now cover more than 20% of Indigenous lands, endangering hundreds of Indigenous communities and critical ecosystems across 450,000 square kilometers.

Mining, the study also shows, is polluting at least 30 Amazonian rivers and eroding communities’ proven ability to prevent deforestation. From 2000 to 2015, Indigenous lands with mining activities had higher incidences of tree cover loss than those without mining. In Bolivia, Ecuador and Peru, for example, forest loss was at least three times higher in Indigenous territories with mining operations – both legal and illegal – than those without; and one to two times higher in Colombia and Venezuela.

See more data and findings in the interactive report.

Protecting Indigenous lands, including the sustainable development and environmental benefits they generate, will require a radical shift in governments’ and companies’ approaches to mining. Amazonian countries should strengthen Indigenous Peoples’ land and natural resource rights; establish and enforce social and environmental safeguards aligned with international standards; more consistently monitor mining operations across Indigenous lands; and step up efforts to identify and prosecute those who facilitate illegal mining practices. Companies, the report recommends, should comply with these stricter safeguards as well as invest in ecological restoration and reforestation of old mining sites.

The Scramble for Land Rights