Transformations must occur across every sector at far faster pace than recent trends to keep the window open to achieve the Paris Agreement’s goal to limit global warming to 1.5°C, according to this Systems Change Lab report authored by the UN High-Level Climate Champions, Climate Action Tracker, ClimateWorks Foundation, Bezos Earth Fund and World Resources Institute. 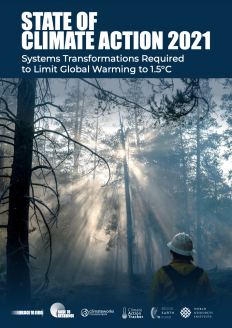 Limiting global warming to 1.5°C requires far-reaching transformations across power generation, buildings, industry, transport, land use, coastal zone management, and agriculture, as well as the immediate scale-up of technological carbon removal and climate finance. This report translates these transitions into 40 targets for 2030 and 2050, with measurable indicators.

The transitions required to avoid the worst climate impacts are not happening fast enough. Of the 40 indicators assessed, none are on track to reach 2030 targets. Change is heading in the right direction at a promising but insufficient speed for 8 and in the right direction but well below the required pace for 17. Progress has stagnated for 3, while change for another 3 is heading in the wrong direction entirely. Data are insufficient to evaluate the remaining 9.

This decade is our make-or-break opportunity to limit warming to 1.5°C and steer the world toward a net-zero future.

The Sixth Assessment Report of the Intergovernmental Panel on Climate Change (IPCC) shows that limiting global temperature rise to 1.5°C by the end of the century is still possible, but it will require rapid, immediate, and economy-wide greenhouse gas (GHG) emissions reductions, as well as the removal of carbon from the atmosphere. Near-term actions to halve GHG emissions by 2030 must be pursued alongside longer-term strategies to achieve deep decarbonization by 2050. Should we fail to act now and GHG emissions continue to rise unabated, warming could climb to between 3.3°C and 5.7°C above preindustrial levels by the end of the century—temperatures that would bring catastrophic and inequitable impacts to communities and ecosystems around the world, beyond anything seen so far (IPCC 2021).

The decisions made today will determine the severity of climate change impacts that will affect us all for decades to come.

Many countries have submitted more ambitious nationally determined contributions (NDCs), as well as long-term low-emissions development strategies. An increasing number of nonstate actors, including companies, cities, regions, and financial institutions, have also pledged to reduce GHG emissions, for example, through the Race to Zero campaign of the United Nations Framework Convention on Climate Change (UNFCCC) High-Level Climate Champions. It is critical that, at COP26 and beyond, all decision-makers begin transforming these commitments into action.

At this critical time, decision-makers are also grappling with the highly unequal impacts of the COVID-19 pandemic.

As some countries begin to focus on rebuilding their communities and economies, their recovery efforts will shape the global economy for decades to come. It is essential, then, that these stimulus packages not only address the current health and economic crises but also disrupt the carbon lock-in that is common to nearly all economic sectors by steering trillions of dollars toward investments in a net zero-carbon, just future. Fortunately, a growing body of evidence shows that green stimulus investments can deliver more jobs and better growth than investing in the traditional carbon-intensive economy (IEA 2020j; IFC 2021; Jaeger et al 2021). But an understanding of what different sectors can and should contribute to curbing GHG emissions through midcentury will be needed to guide this transition to a low-carbon, more resilient society.

We’re not starting from a standstill—recent years have witnessed notable progress, despite relatively low levels of overall ambition and investments.

Already, we have seen increasingly dynamic action occur within a handful of sectors, across some regions, and from individual companies, cities, states, investors, and civil society organizations, all proving that faster-than-expected progress is possible. For example, several low-emissions technologies, including wind and solar power, have grown in a nonlinear fashion over the past two decades, and sales of EVs have also increased rapidly since 2015. These innovations have all benefited from supportive measures—early investments in research and development, favorable policies, and leadership from key public and private sector decision-makers, for example—that helped drive improvements in performance, reductions in price, and subsequently, increased adoption. And these bright spots show us what’s possible when decision-makers deploy the many tools at their disposal to accelerate the transition to a net-zero future.

But much more could be achieved if all decision-makers around the world gave climate action the high priority it is due.

Globally, climate action to date has largely failed to spur the rapid, far-reaching transformations needed across all sectors to avoid the worst impacts of global warming. In some industries, the technologies, practices, and approaches needed to accelerate decarbonization are well understood but have not yet seen the levels of investment and political support needed to rapidly scale up mitigation action. In others, innovations needed to catalyze systemwide transitions are still at relatively early stages and not yet ready to displace emissions-intensive incumbents. All hands are urgently needed on deck to speed up this progress, as well as expand it to all sectors and regions.

But to realize these benefits, policies must be designed with equity and a just transition in mind. It will be essential, for example, to tackle the challenges faced by workers and communities whose livelihoods are tied to high-carbon industries. Promising examples of just transition initiatives are emerging around the world. These must become widespread to ensure that costs and benefits of transformation are equitably distributed.

Our ever-shrinking carbon budget does not accommodate delay.

To reach a net-zero future, we must ignite fundamental change across nearly all systems, from how we move around the world and build cities to how we grow food and power industry. These systemwide transitions will depend on the massive scale-up of finance, technology, and capacity building for countries that need support.