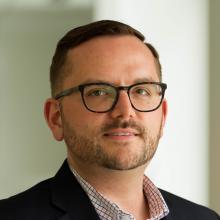 Tom Puryear is a Project Associate in the Sustainable Finance Center where he serves to support project implementation within the Center. He works closely with project leads to implement project management standards within the center as well as assisting in work-planning and fundraising efforts.

Tom previously worked for a variety of startup businesses, typically serving in an operational capacity in his roles. Most recently he worked for a tech company called Receipt Bank, which specializes in the automation of bookkeeping and data input, where he provided operational support to the US team. He holds a B.A. in Government from the University of Virginia in Charlottesville, Virginia, and a M.S. in Management from Coker University in Hartsville, South Carolina.

Tom moved to Washington, D.C. in 2010 and enjoys exploring new neighborhoods in the city in his free time. He lives in the Eckington neighborhood with his husband and their dog, Liddy.