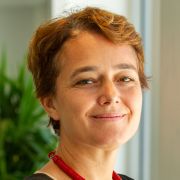 Tamar Shapiro is the Senior Manager of Strategic Initiatives for NUMO, the New Urban Mobility alliance, hosted by WRI Ross Center for Sustainable Cities. She has two decades of experience working on policies and programs related to land use, housing, transportation, and economic development in the United States and Europe.

Prior to joining NUMO, Tamar was a Non-Resident Fellow at the Urban Institute, based in Leipzig, Germany. Tamar is also the former President and CEO of the Center for Community Progress in Washington, DC, an organization dedicated to helping cities across the U.S. address property vacancy and abandonment and build strong, stable neighborhoods for and with residents. Before joining Community Progress, Tamar was Senior Director of Urban and Social Policy at the German Marshall Fund of the United States, where she managed transatlantic urban policy programs with a particular focus on the revitalization of older, industrial cities. Previously, Tamar served as the Director of the Governors’ Institute on Community Design at Smart Growth America. In this role, she advised governors and their cabinet officials on state policies related to urban development and transportation. An attorney by training, Tamar Shapiro also worked at Klein Hornig, LLP, a law firm specialized in affordable housing development.

Tamar received a J.D. from Harvard Law School, an M.Phil. in European Studies from the University of Cambridge, and a B.A. from Harvard College. She was the recipient of a McCloy Fellowship in Environmental Affairs to conduct a 2010 research project on vacant property policies in former East Germany. In 1999-2000, she was a Robert Bosch Foundation Fellow in Berlin and worked at the Berlin Administration on Urban Planning and Environment as well as the German Institute for Urban Affairs. She is a member of the board of Next City.