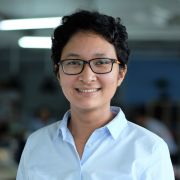 Frisca is part of Wahana team who does research on forest monitoring under the larger theme of land use and governance.

Prior to current role, Frisca worked with J-PAL Southeast Asia where she managed a research project on effectiveness of drug rehabilitation in collaboration with a government body. Along with several principal investigators from Indonesia and Australia, she conducted survey as to patients in several provinces to compare their status before and after treatment. Other than that, Frisca was also involved in other projects such as financial inclusion in East Java, virtual migration, and cocoa farmer certification in Aceh—here, groups of farmer who received certification training are compared to those who are not treated.

Frisca completed her undergraduate in International Relations from Universitas Indonesia and master in applied anthropology from Australian National University. She is very fond of listening to music, and in her spare time will watch TV series, read and occasionally bake for herself.