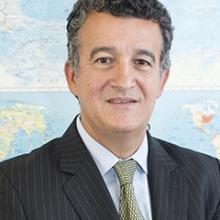 Rogério Studart is a senior fellow of the World Resources Institute, currently working on the new climate economy, an initiative to promote policies guided by evidence-based analysis of costs, benefits, and opportunities of the much-needed transitions to low-carbon growth.

Dr. Studart is a non-resident fellow of Brazil’s Center of International Relations – CEBRI and a distinguished fellow at the Global Federation of Competitiveness Councils. Previously he was an executive director to the World Bank Group, representing Brazil and eight other nations. In this capacity in different years, he was a member of every executive board committee, represented Brazil at the meetings of the g-20 and other international forums.

Dr. Studart was also Executive Director for Brazil and Suriname at the Inter-American Development Bank Group (IADB), having acted as chairman of several of its board committees. He has also held positions with the United Nations in Santiago, Chile, and in Geneva, Switzerland, and at the Chase Manhattan Bank of Brazil.

Dr. Studart is an economist by profession and holds a Ph.D. from the University of London, England.

He is an award-winning scholar, published books and several articles on macroeconomics, finance, and development finance, and columns in different news media around the world.