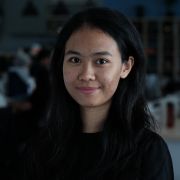 Rida is a Researcher under WRI’s research incubation programme called “Wahana Riset Indonesia”, where she focuses on the environmental-economic accounting and valuation of ecosystem.

Rida holds a master's in Carbon Finance from The University of Edinburgh, UK. During her study, she was conducting a consultancy project with Greenhouse Gas Management Institute to map out climate finance standards across the globe, and completing a research project supported by the International Institute for Environment and Development (IIED) on the offset prices variation for clean cook stoves in the voluntary carbon market.

Because of her involvement in youth environmental movements, at the age of 21, she was invited to meet the former President of the US, Barack Obama, where she was a US Department of State’s scholar.

Rida, who is a badminton fangirl, has travelled extensively to more than 20 countries as a solo-traveler. In her spare time, she cannot miss playing badminton.