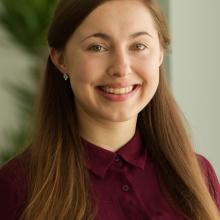 Ralien Bekkers is a Senior Country Engagement Specialist at the NDC Partnership Support Unit. She works with government ministries and development partners on creating strategic results frameworks and investment plans for implementation of NDCs (nationally determined contributions to climate action of each country under the Paris Climate Agreement) that match immediate country needs with partner support. Her portfolio covers countries in South and South East Asia, Small Island Developing States in the Pacific and Caribbean, and the Middle East. Ralien also leads the Partnership's efforts on integrating gender equality into country engagement.

From Rio+20 until COP20, Ralien served as the Netherlands' Official Youth Representative on Sustainable Development to the United Nations. In 2015, the year the Sustainable Development Goals were adopted and the Paris Agreement was agreed upon, she worked at the Post-2015 Development Planning Unit at the Executive Office of the Secretary-General at the UN Headquarters in New York.

Ralien holds a Master of Environmental Management from Yale University, where she also created and taught a new course on Sustainable Development Goals & Implementation at the Yale School of Forestry & Environmental Studies and the Jackson Institute for Global Affairs. Ralien holds a Bachelor of Science in Future Planet Studies from the University of Amsterdam, and spent a summer in San José, Costa Rica, studying Sustainability Management at the Universidad Latinoamericana de Ciencia y Tecnología.

Despite having lived in the US for over five years, Ralien is still very proudly Dutch and thus a great fan of everything Oranje (and Ajax) - in particular women's and men's football.