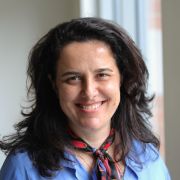 Rachel is the Director for World Resources Institute Brasil (WRI Brasil). In her current role, she worked to launch WRI Brasil as a nationally-recognised NGO in 2014, raising funds, recruiting a team of sixty professionals, creating an internationally-recognised Board, and establishing WRI Brasil’s three programs: climate change, sustainable cities, forests.

Rachel is considered a key mover and shaker in climate change throughout Brazil. Between 2008 and 2011 she acted as the deputy-coordinator at the Center for Sustainability Studies at FGV Business School in São Paulo, where she coordinated the Low Carbon Management course and taught Sustainability Management modules as part of the MBA course at FGV.

During her tenure as Deputy Coordinator at FGV’s Center for Sustainability Studies, she coordinated several projects including the launch of the Brazilian Greenhouse Gas Protocol (GHGP), co-founded the national Climate Watch Network (Observatório do Clima, a network of Brazilian NGOs monitoring climate change), contributed to São Paulo’s Municipal Policy on Climate Change and Amazonia’s State Climate Change Policies, and researched and published a national guide on Sustainable Public Procurement. Between 2004 and 2005, Ms. Biderman coordinated the environmental dimension of the Brazilian Stock Exchange Sustainability Index (ISE). In the early 2000’s she was co-coordinator of the Brazilian Climate Change Forum, established by President Cardoso in 2001.

Rachel is a board member of several socio-environmental organisations, including WWF Brasil, Black Jaguar Foundation (BJF) , and a member of the state of São Paulo Government Environmental Managemet Council. In the past, she was a member of the boards of Instituto de Defesa do Consumidor (IDEC), Instituto Marina Silva, and Fundación Futuro Latino Americano (FFLA). She was formerly the President of Greenpeace Brasil’s Board between 2011 and 2013, was a member of the Forest GAC of the World Economic Forum since 2014.

Ms. Biderman has a strong academic record, having been selected as a Fellow at the Science, Technology and Society Program at the Harvard JFK School of Government in 2009. Rachel received a PhD in Public Administration from the Fundação Getúlio Vargas (FGV) in 2011, holds a Masters in Environmental Sciences from the University of São Paulo (1999) and completed International Legal Studies (LLM) at the American University Washington College of Law (1992). She holds a bachelors degree in law from the University of São Paulo (1990). Throughout her career, Rachel has focussed on international and Brazilian environmental law, climate change and sustainable production and consumption, having also taught at several universities throughout São Paulo, including FGV.

She is author of the book Democracy, Citizenship and Environmental Protection, published in 2002, and co-author of several children’s books on environment and sustainability.