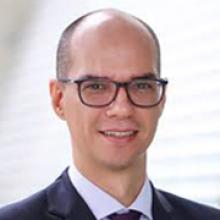 Paulo André Camuri is a Senior Economist at WRI Brasil.

Paulo has been teaching Economics at universities for the last 10 years. He was awarded 1st place on 10th Brazilian National Treasury Award for the Best Academic Master’s Dissertation on Public Debt, and 3rd place on the 36th Brazilian Development Bank (BNDES) Award of 2016 for the Best PhD Thesis on Public Debt in Developed and Emerging Countries.

In his free time, Paulo enjoys reading and watching movies.